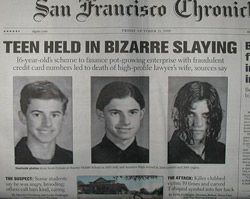 Scott Edgar Dyleski (, ) was convicted of murdering his neighbor, , the wife of prominent . He received the maximum penalty allowed by the law, . As a juvenile at the time of the murder he did not qualify for the . Dyleski committed this murder on , , just two weeks shy of his 17th birthday. He is now serving his sentence in in , .

Scott Dyleski was born to Esther Fielding and Kenneth Dyleski in 1988. His parents separated when he was two years old. After the separation, Scott lived with his mother. Eventually Scott and his mother moved to Lafayette, CA and began living in a home with another family they befriended. He constantly made whipping references to one of his classmates in summer school. [Testimony by Gregory (last name omitted for security reasons)]

On , , Dyleski's neighbor was found murdered in her home. She was found lying in the entryway just inside the front door and had been ed to death.

Initially Dyleski was represented by attorney . He later asked to be removed from the case, because he defended the driver of a car that killed Dyleski's sister and another passenger in 2002. Dyleski was then represented by , a public defender. Dyleski pled not guilty.

Investigators believe Dyleski and his friend, , planned to grow in Scott Dyleski's closet, with Dyleski in charge of raising money, according to Croen, who was granted immunity for testifying. He testified that Dyleski used stolen information belonging to his neighbors and used the cards to order lighting equipment. He also testified that his role in the credit card scam was researching what equipment to order. Croen actually constructed order forms from websites that he claims he then sent to Dyleski. According to prosecutors, one of Dyleski's orders used the credit card information for another neighbor, but mistakenly used Vitale's address as the bill to address, and his own address as the ship to address. The lighting company refused to process the order, suspecting it was fraudulent. Dyleski told his friend Robin Croen that he would "take care of it".

During the trial, Prosecutor Harold 'Hal' Jewett tried to establish that the symbol found on the victim's back closely resembled the letter "H" in the word "hate" from a bumper sticker reading "I'm for separation of Church and Hate", which was seized from Dyleski's bedroom. The coroner's autopsy report describes the marks on Vitale's back as an "H-shaped figure cut into skin of posterior torso"

At the conclusion of the preliminary hearing Judge Mary Ann O'Malley ruled that prosecutors have enough evidence for trial. Dyleski was arraigned on an additional charge of first-degree residential burglary and he entered a new plea of not guilty to all the charges. His mother was accused of helping her son destroy evidence, but the charge was dropped under the condition that she testify truthfully.

Jury selection began in July 2006 in the courtroom of Judge Barbara Zuniga, who became the trial judge after defense attorney Ellen Leonida made a against Judge O'Malley on the grounds that the jurist was "prejudiced against the interest of the defendant." Attorneys provided contrasting views of Dyleski in their opening statements. Prosecutor Harold Jewett said Dyleski identified with Gothic symbols and art that depicted violence and stabbed and beat Vitale. Leonida described her client as a gentle kid whose friends know he isn't a killer and instead valued human and animal rights. [ [http://www.sfgate.com/cgi-bin/article.cgi?f=/c/a/2006/08/23/BAGF5KNFKI1.DTL&feed=rss.news MARTINEZ / Clash of details as Dyleski case heads to jury ] ]

At the end of August attorneys gave closing arguments, capping several weeks of testimony. The prosecutor called to the stand Dyleski's housemates, mother, girlfriend, friend, a forensic pathologist, a DNA expert and several criminalists. , an outspoken television personality, represented Jena Reddy, Dyleski's girlfriend. She told the jury that while Dyleski never admitted or denied killing his neighbor, he told her he would take the blame to protect her and his best friend. [ [http://www.cnn.com/2006/LAW/10/02/scotus.allred.ap/index.html "Justices refuse to ungag Gloria Allred"] , "CNN.com", , ] DNA evidence showed Vitale's blood was found on Dyleski's belongings, the DNA of both Vitale & Dyleski was found on the ski mask worn during the murder, and his DNA was found on the bottom of her foot (17 out of 17 markers matched). [Dearen, Jason. "Oakland Tribune", 16 August 2006 [http://findarticles.com/p/articles/mi_qn4176/is_20060816/ai_n16643728 DNA Mix Traced To Victim and Dyleski] . Accessed 31 December 2007.] A shoe print at the murder scene was determined by the jury to match shoes belonging to Dyleski. Jason Kwast, another criminalist, testified that the pattern of bloody footprints found on a plastic lid that was discovered in Vitale's house matched the pattern of the bottom of Land's End shoes belonging to Dyleski. [KGO San Francisco (ABC 7). [http://abclocal.go.com/kgo/story?section=local&id=4462209 "Dyleski Trial: References To Serial Killers"] . Accessed 31 December 2007] According to ABC7News, "A shirt found in the van had only Dyleski's DNA on it, but shoes that Dyleski allegedly asked his girlfriend to hold the day after the murder had both Dyleski's and Vitale's DNA on them." [KGO San Francisco (ABC 7). [http://abclocal.go.com/kgo/story?section=local&id=4461231 "Dyleski Trial: DNA Found On Clothing"] Accessed 31 December 2007.] A chilling to-do list was purported to have been written by Dyleski. [http://64.233.167.104/search?q=cache:wgPHt4Ht57MJ:cbs5.com/local/Scott.Dyleski.David.2.440514.html+dyleski+chillingly+detailed+to-do+list&hl=en&ct=clnk&cd=1&gl=us] Leonida called a number of Dyleski's friends to serve as character witnesses. Dyleski waived his right to testify. No experts were called to rebut the prosecution's DNA evidence.

Scott Dyleski was found guilty of all the charges against him: first-degree murder, the special circumstance of murder in the commission of a first-degree residential burglary, first-degree residential burglary and an enhancement for using a dangerous weapon to bludgeon Vitale. He was sentenced to life in prison without the possibility of parole. He was held in juvenile hall until his 18th birthday on , (about one month after sentencing) and was then transferred to . He was kept out of the general population while his case was evaluated and was then transferred to Kern Valley State Prison several months later.