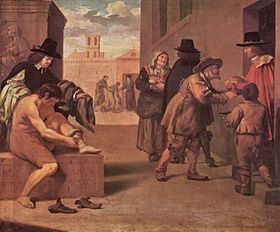 Works of Mercy by Pierre Montallier, 1680

The Works of Mercy or Acts of Mercy are actions and practices which Christianity in general, and the Methodist Church, Roman Catholic Church and the Eastern Orthodox Church in particular, consider expectations to be fulfilled by believers, and are a means of grace,[1] which aid in sanctification.[2]

These concepts (e.g. feeding the hungry, sheltering the homeless) have existed in many Christian Churches including Roman Catholicism, Orthodox Christianity, Lutheranism, and the Anglican Communion.

Beginning in the 20th century, the Roman Catholic tradition saw an extension of the framework for the traditional Works of Mercy with the establishment of the devotion to Divine Mercy and encyclicals such as Dives in Misericordia.[5][6]

These works, it is believed, express mercy, and are thus expected to be performed by believers insofar as they are able, in accordance with the Beatitude, "Blessed are the merciful, for they shall obtain mercy" (Gospel of Matthew 5:7).

These acts are to keep the two greatest commandments (Matthew 22:35-40):

Works of Mercy, by the Master of Alkmaar in 1504, for the St. Lawrence church in Alkmaar. The panels show the works of mercy in this order: feed the hungry, give drink to the thirsty, clothe the naked, bury the dead, shelter the traveler, comfort the sick, and free the imprisoned.

Not everyone is considered capable or obligated to perform the first three spiritual works of mercy if they do not have proper tact, knowledge or training to do so. The last four are considered to be the obligation of all people without condition.[4] 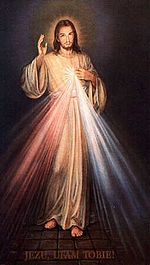 In the 20th century, there was new focus on mercy in the Roman Catholic Church, partly due to the Divine Mercy devotion , due to Saint Mary Faustina Kowalska (1905–1938), who is known as the Apostle of Mercy, which is followed by over 100 million Catholics.[9][10][11]

In the Divine Mercy devotion one lets the love and mercy of God flow through one's own heart towards those in need of it.[10]

In Diary: Divine Mercy in My Soul (Notebook II, item 742) Faustina wrote that Jesus told her:

"I demand from you deeds of mercy, which are to arise out of love for Me." and that he explained that there are three ways of exercising mercy toward your neighbor: the first-by deed, the second-by word, the third-by prayer.[5]

Pope John Paul II was a follower of the Divine Mercy devotion, and canonized Faustina.[11][12] In his encyclical Dives in Misericordia he examined not only God's mercy, but also the need for human mercy.[6]

Works of mercy, are a prudential means of grace.[13] Along with Works of Piety, they are necessary for the believer to move onto Christian perfection.[14] In this sense, the Methodist concern for people at the margins is closely related to its worship.[15] As such, these beliefs have helped create the emphasis of the social gospel in the Methodist Church.[16]

Nature of the obligation

The actual obligation in a given case depends largely on the degree of distress to be aided, and the capacity or condition of the one whose duty in the matter is in question. There are easily recognizable limits as the performance of the corporal works of mercy is concerned.

Likewise the law imposing spiritual works of mercy is subject in individual instances to important reservations.