Maryland Route 108 is a suburban state highway in the central part of the U.S. state of Maryland, starting in Damascus and ending near Columbia. 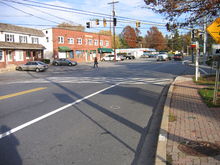 Maryland Route 108 takes a very sinuous route through the Maryland exurbs located in between Washington, D.C. and Baltimore. It begins at Maryland Route 27 in Damascus, located in northern Montgomery County. It then proceeds to sweep south through farmland towards Olney where it intersects with MD 97, also known as Georgia Avenue. 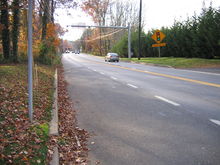 It then travels east towards the Patuxent River, passing the historic communities of Sandy Spring and Ashton, where it crosses MD 650 New Hampshire Avenue.

After crossing the Patuxent into Howard County, MD 108 trends back north to Clarksville, where it crosses MD 32.

It then trends east again, forming the northern border of the planned community of Columbia and intersecting with US 29, a major north–south thoroughfare. The road then takes its final curve south, ending at Maryland Route 175 just west of Interstate 95 in the vicinity of Guilford.

The road generally follows a two-lane format. At major intersections, such as those at MD 32 and MD 29, it expands to four lanes. The stretch of the road around Olney is the only exception to this rule, forming four lanes for several miles due to the commercial nature of the area.

The section between the route's current interchange with US 29 in Columbia and its intersection with Maryland Route 650 (New Hampshire Avenue) in Ashton is the former route of US 29 prior to the start of construction of the planned community of Columbia, which began in the late 1960s; the route forms the northern boundary of the town. Before the diversion of US 29, MD 108 ended in Ashton at an intersection with the U.S. route.

The section of MD 108 between MD 104 (in Ellicott City) and the route's eastern terminus at MD 175 was a former alignment of MD 175 before the construction of 175's current route through the heart of Columbia.

Before the construction of the Patuxent Freeway between MD 108 and US 29, MD 32 once overlapped MD 108 through Clarksville for a short distance before turning onto a new alignment. The western end of the concurrency was at Guilford Rd., while the eastern end is now Exit 20 from MD 32.