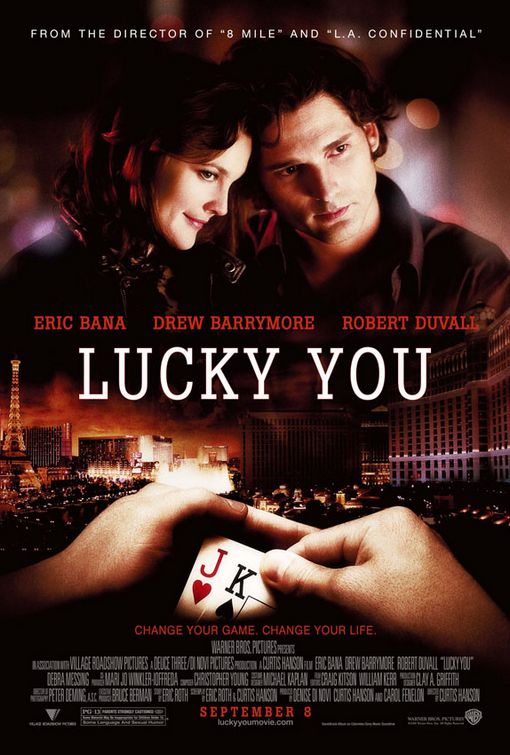 Huck Cheever () is a young and talented player in Las Vegas haunted by his relationship with his estranged father, L.C. Cheever (), a two-time World Series of Poker Champion. Huck is a regular in Vegas s and wants to get a seat in the $10,000 main event No Limit tournament at the .

After a good night at the Bellagio poker room, Huck goes to a party and meets aspiring singer Billie Offer (), who has just arrived in town. The two seem interested in each other, but Billie's older sister Suzanne () warns her that Huck is "hustle 10, commitment zero."

Back at the Bellagio, Huck is doing well at the tables before L.C. returns to town from the South of France. Huck greets his father coldly. The two play heads-up.

Roy Durucher () who just observed the hand tells Huck that he plays poker as well as anybody, but he's a "blaster" (not patient enough) and always goes for broke. Roy proposes to finance Huck in the $10,000 main-event with a 60% (Roy) — 40% (Huck) split if they win, but Huck refuses.

After failing to borrow money from his friend Jack (), Huck goes to Suzanne's place hoping to get a loan. Instead he runs into Billie, who gets a call confirming that she has landed a job singing at a nightclub. Huck proposes a celebration and takes her to play poker at with the $1,000 in traveler's checks she has brought to Vegas. After introducing the game to her, L.C. arrives and shows Huck his mother's wedding ring that Huck had pawned and that LC he has redeemed. Huck repays the money that he borrowed from Billie with interest. However, he loses his winnings after she leaves. He fails to borrow money from his tenant.

Huck heads to the nightclub and asks Billie out to dinner. Over Chinese food, Huck explains that his father stole from his mother before leaving her. Billie observes that Huck hates his father but still became a poker player. Huck says his father taught him how to play on the kitchen table with "pennies, nickels, and dimes." After dinner, they make love at Huck's place. As Billie sleeps, Huck steals from Billie's purse to play poker at the Bellagio again. Huck and Billie fall out over him stealing money from her.

Huck goes to play in a super satellite for his entry to the main event. He appears to have the seat won, but a misdeal causes him to lose the seat.

At the apartment, Huck apologizes to Billie again and says that he feels that they have a chance at something special. He says that if they end their relationship now, they'll never know.

Despite a reconcilliation, Billie and Huck break up again due to Huck's gambling. When Huck goes to Suzanne's apartment looking for Billie, Suzanne says that Billie has gone home for a couple of days. Huck goes to Bakersfield to Billies house to tell her that he meant what he said when he felt they had a chance at something special.

Huck plays poker against LC and lets his father win, which allows them to reconcile. Huck then goes after Billie and they reconcile as well.

* as Huck Cheever
* as Billie Offer
* as L.C. Cheever
* as Suzanne
* as Telephone Jack
* as Ready Eddie
* as Michelle Carson
* as Ray
* as Jason Keyes

Many of the poker players that can be seen playing are actual poker pros. [ [http://www.imdb.com/title/tt0338216/fullcredits#cast Internet Movie Database (Cast) Retrieved June 1,2007.] ] They are:

The soundtrack included numerous tunes, including Drew Barrymore singing his hit "The Cold Hard Truth" and the original song "Huck's Tune" which was written specifically for the film.

Opening the same weekend as , box-office doom was almost inevitable. The film debuted with a tepid $2.7 million in ticket sales; the lowest saturated opening week since 1982. [ [http://www.boxofficemojo.com/alltime/weekends/worstopenings.htm?page=WRSTOPN25&p=.htm WORST WIDE OPENINGS] ] It finished with just over $5.7 million in total revenue. It was a box-office bomb in a summer of blockbusters. Critically it ranked a low 28% at .