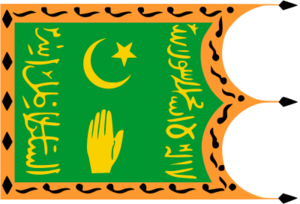 The Emirate of Bukhara ( _uz. "Buxoro Amirligi"; _tg. Аморати Бухоро) was a state that existed from 1785 to 1920. It occupied the land between the and rivers, known formerly as . Its core territory was the land along the lower Zarafshan River, and its urban centres were the ancient cities of and the emirate's capital, . It was contemporaneous with the to the west, in , and the to the east, in Fergana.

The Emirate of Bukhara was officially created in 1785, upon the assumption of rulership by the emir, Shah Murad. Over the course of the 18th century, the emirs had slowly gained effective control of the , from their position as "ataliq". By the 1740s, when the khanate was conquered by of , it was clear that the emirs held the real power. , "A History of Inner Asia" (2000), p. 179-80.]

In 1868 the emirate lost a war with , which had colonial aspirations in the region. Russia annexed much of the emirate's territory, including Samarkand. [ibid, p. 198.] In 1873 the remainder became a Russian , [http://www.onwar.com/aced/data/romeo/russobukharan1868.htm] and was soon surrounded by the Governorate-General of Turkestan.

Reformists within the Emirate had found the conservative emir, , unwilling to loosen his grip on power, and had turned to the Russian Bolshevik revolutionaries for military assistance. The launched an unsuccessful assault in March, 1920, and then a successful one in September of the same year. [ibid, pp. 221-222.] The Emirate of Bukhara was conquered by the and replaced with the . Today the territory of the defunct emirate lies mostly in , with parts in , , and .

Around the 16th Century, Europeans came to Central Asia and saw Jews living in the Emirate of Bukhara. These Jews were called .