The Sukhoi PAK FA (Russian: Перспективный авиационный комплекс фронтовой авиации, Perspektivny aviatsionny kompleks frontovoy aviatsii, literally "Prospective Airborne Complex of Frontline Aviation") is a twin-engine jet fighter being developed by Sukhoi OKB for the Russian Air Force. The Sukhoi T-50 is the prototype for PAK FA.[12] The PAK FA is one of only a handful of stealth jet programs globally. [13]

Sukhoi director Mikhail Pogosyan has projected a market for 1,000 aircraft over the next four decades, which will be produced in a joint venture with India, 200 each for Russia and India and 600 for other countries.[22] He has also said that the Indian contribution would be in the form of joint work under the current agreement rather than as a joint venture.[23] The Indian Air Force will "acquire 50 single-seater fighters of the Russian version" before the two seat FGFA is developed.[24] The Russian Defense Ministry will purchase the first 10 aircraft after 2012 and then 60 after 2016.[25][26] The first batch of fighters will be delivered with current technology engines.[27] Ruslan Pukhov, director of the Centre for Analysis of Strategies and Technologies, has projected that Vietnam will be the second export customer for the fighter.[28] The PAK-FA is expected to have a service life of about 30–35 years.

In the late 1980s, the Soviet Union outlined a need for a next-generation aircraft to replace its MiG-29 and Su-27 in frontline service. Two projects were proposed to meet this need, the Sukhoi Su-47 and the Mikoyan Project 1.44. In 2002, Sukhoi was chosen to lead the design for the new combat aircraft.[29]

The Tekhnokompleks Scientific and Production Center, Ramenskoye Instrument Building Design Bureau, the Tikhomirov Scientific Research Institute of Instrument Design, the Ural Optical and Mechanical Plant (Yekaterinburg), the Polet firm (Nizhniy Novgorod) and the Central Scientific Research Radio Engineering Institute (Moscow) were pronounced winners in the competition held in the beginning of 2003 for the development of the avionics suite for the fifth-generation airplane. NPO Saturn has been determined the lead executor for work on the engines for this airplane.

The Novosibirsk Chkalov Aviation Production Association (NAPO Chkalov) has begun construction of the fifth-generation multirole fighter. This work is being performed at Komsomol'sk-on-Amur together with Komsomolsk-on-Amur Aircraft Production Association; the enterprise's general director, Fedor Zhdanov reported during a visit to NAPO by Novosibirsk Oblast's governor Viktor Tolokonskiy on 6 March 2007. "Final assembly will take place at Komsomol'sk-on-Amur, and we will be carrying out assembly of the fore body of this airplane", Zhdanov specified.

On 8 August 2007, Russian Air Force Commander Alexander Zelin was quoted by Russian news agencies that the development stage of the PAK FA program is now complete and construction of the first aircraft for flight testing will now begin.[30] Alexander Zelin also said that by 2009 there will be three fifth-generation aircraft ready. "All of them are currently undergoing tests and are more or less ready", he said.[31] In the summer of 2009 the design was approved.[29]

On 11 September 2010, it was reported that Indian and Russian negotiators had agreed on a preliminary design contract that would then be subject to Cabinet approval. The joint development deal would have each country invest $6 billion and take 8 to 10 years to develop the FGFA fighter.[32] The agreement on the pre-design of the fighter was to be signed in December 2010.[33] The preliminary design will cost $295 million and will be complete within 18 months.[34]

On 17 August 2011, it was reported by Russian state-run media that the Sukhoi T-50 aircraft cost Russia and India $6 billion to develop, with India shouldering about 35% of the cost.[35]

Former deputy defense minister Vitaly Shlykov has cast doubt on the industrial capacity of Russia to produce the aircraft in significant numbers.[37]

On 28 February 2009, Mikhail Pogosyan announced that the airframe for the aircraft was almost finished and that the first prototype should be ready by August 2009.[38] On 20 August 2009, Sukhoi General Director Mikhail Pogosyan said that the first flight would be by year end. Konstantin Makiyenko, deputy head of the Moscow-based Centre for Analysis of Strategies and Technologies said that "even with delays", the aircraft would likely make its first flight by January or February, adding that it would take 5 to 10 years for commercial production.[39]

The maiden flight had been repeatedly postponed since early 2007 as the T-50 encountered unspecified technical problems. Air Force chief Alexander Zelin admitted as recently as August 2009 that problems with the engine and in technical research remained unsolved.[40]

On 8 December 2009, Deputy Prime Minister Sergei Ivanov announced that the first trials with the fifth-generation aircraft would begin in 2010.[41] The testing, however, has commenced earlier than stated, with the first successful taxiing test taking place on 24 December 2009.[42][43][44]

The aircraft's maiden flight took place on 29 January 2010 at KnAAPO's Komsomolsk-on-Amur Dzemgi Airport; the aircraft was piloted by Sergey Bogdan (Сергей Богдан) and the flight lasted for 47 minutes.[3][45][46][47]

A second airframe was first planned to join the flight testing in the fourth quarter of 2010 but was postponed. On 3 March 2011 a second prototype was reported to have made a successful 44 minute test flight.[17] These first two aircraft will lack radar and weapon control systems, while the third and fourth aircraft, to be added in 2011, will be fully functional test aircraft.[48] On 14 March 2011, the aircraft achieved supersonic flight at a test range near Komsomolsk-on-Amur in Siberia.[49]

The T-50 was displayed publicly for the first time at the 2011 MAKS Airshow. Russian Prime Minister Vladimir Putin was in attendance.[50][51]

In June 2011, an unauthorized video was made of the Sukhoi PAK FA in flight displaying a variety of acrobatic moves.[52]

On August 21, 2011 during a take-off run at the MAKS Airshow, a brief flame appeared out of the right-hand engine before liftoff due to a sensor malfunction. The takeoff was aborted, braking parachutes were deployed and the aircraft returned to its park position under its own power.[citation needed][importance?]

The T-50-3 prototype is expected to be the first prototype to fly with an AESA radar by the end of 2011.[54] On November 22, 2011 the third prototype T-50-3 had it's first flight from KnAAPO's airfield in Komsomolsk-on-Amur, piloted by Hero of the Russian Federation Sergey Bogdan. The aircraft spent little more than an hour in the air , and it was subjected to basic stability and powerplant checks.[55]

Alexei Fedorov has said that any decision on applying fifth generation technologies to produce a smaller fighter (in the F-35 range) must wait until after the heavy fighter, based on the T-50, is completed.[58] 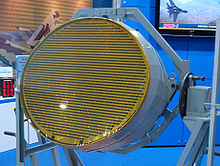 NIIP's AESA Radar for the PAK FA on display MAKS-2009 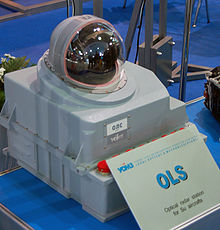 Optical detection pod for the Sukhoi PAK FA at MAKS-2009

Although most of information about the PAK FA is classified, it is believed from interviews with people in the Russian Air Force and Defense Ministry that it will be stealthy,[9] have the ability to supercruise, be outfitted with the next generation of air-to-air, air-to-surface, and air-to-ship missiles, incorporate a fix-mounted AESA radar with a 1,500-element array[59] and have an "artificial intellect".[60]

According to Sukhoi, the new radar will reduce pilot load and the aircraft will have a new data link to share information between aircraft.[61]

Composites are used extensively on the T-50 and comprise 25% of its weight and almost 70% of the outer surface.[48] It is estimated that titanium alloy content of the fuselage is 75%. Sukhoi's concern for minimizing radar cross-section (RCS) and drag is also shown by the provision of two tandem main weapons bays in the centre fuselage, between the engine nacelles. Each is estimated to be between 4.9-5.1 m long. The main bays are augmented by bulged, triangular-section bays at the wing root.[62]

The Moskovsky Komsomolets reported that the T-50 has been designed to be more maneuverable than the F-22 Raptor at the cost of making it less stealthy than the F-22.[63] One of the design elements that have such an effect is the Leading Edge Vortex Controller (LEVCON).

The PAK FA SH121 radar complex includes three X-Band AESA radars located on the front and sides of the aircraft. These will be accompanied by L-Band radars on the wing leading edges.[64][65] L-Band radars are proven to have increased effectiveness against very low observable (VLO) targets which are optimized only against X-Band frequencies, but their longer wavelengths reduce their resolution. However the initial prototypes will use legacy passive electronically scanned array radar.[66][verification needed]

The PAK FA will feature an IRST optical/IR search and tracking system, based on the OLS-35M which is currently in service with the Su-35S.[citation needed]

The 117 (AL-41F1) is a new 5th generation engine custom built for Russia’s fifth-generation stealth fighter jet PAK-FA according to Sukhoi General Director Mikhail Pogosyan. Mikhail Pogosyan has clarified that claims that fifth-generation fighter allegedly has an old engine are wrong. Such claims are made by people with limited knowledge, he said. Though most parameters of the new 5th Gen Engine remains classified General Director Mikhail Pogosyan provided some information on the new engine, The engine thrust was enlarged by 2.5 tonnes when compared with the AL-31 engine, while the engine weight was cut by 150 kilograms. That allowed the new jet to supercruise i.e. move at a supersonic cruise speed without the use of after burner. [68]

The Saturn Research and Production center made digitally controlled system (FADEC) of Project 117 Engine. The new engine produces 33,000 lbs (147 kN) of thrust in afterburner has a Dry weight of 1420 kilogram and T:W ratio of 10.5:1[69]

Mikhail Pogosyan further mentioned that this engine (117) meets the client’s (Russian AirForce) requirements. This is not an intermediate product made particularly for test flights. The engine will be installed in production PAK-FA fighter which will be supplied to the Russian Air Force and prospective foreign clients he said.[70] The engine generates a larger thrust and has a complex automation system, to facilitate flight modes such as maneuverability. It is expected that each engine will be able to independently vector its thrust upwards, downward or side to side. Vectoring one engine up with the other one down can produce a twisting force. Therefore the PAK FA would be the first fifth generation fighter with full 3-D thrust vectoring along all three aircraft axes: pitch, yaw and roll. These engines will incorporate infrared and RCS reduction measures.[71][72]

The PAK FA has a reported maximum weapons load of 7,500 kg.[73] It has an apparent provision for a cannon (most likely GSh-301). It could possibly carry as many as two 30 mm cannons.[27] It has two internal bays estimated at 4.6-4.7 metres by 1-1.1 metres.[74] Some sources suggest two auxiliary internal bays for short range AAMS and six external hardpoints.

The first flight video shows that PAK FA has no conventional rudders, its vertical tails are fully movable.[76] This special tail fin design is mechanically similar to V-tails used by the Northrop YF-23 in 1990s,[77] but is supplemented by dedicated horizontal stabilators (as on the F-22). The T-50 has wing leading-edge devices above the jet engine intakes that have been called a challenge for signature control.[78]

Russia has offered the PAK-FA for South Korea's next generation jet fighter.[79] South Korea's defence procurement agency has confirmed that the Sukhoi PAK-FA is a candidate for the Republic of Korea Air Force's next-generation fighter (F-X Phase 3) aircraft.[80]

Because the aircraft is in development, these specifications are preliminary and are taken as estimates from the available images.

Avionics
N050(?)BRLS AFAR/AESA built by Tikhomirov NIIP and based on Tikhomirov NIIP N035 Irbis-E. It will be the second aircraft based AESA Radar to be built by Russia, the first being the Phazotron NIIR ZHUK-A Radar in the MiG-35.[85]