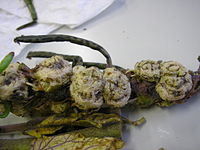 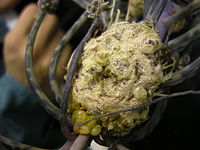 A detail photo of a crown gall on a Kalanchoë infected with Agrobacterium tumefaciens.

Galls or cecidia are outgrowths on the surface of lifeforms caused by invasion by other lifeforms, such as parasites or bacterial infection. Plant galls are abnormal outgrowths[1] of plant tissues and can be caused by various parasites, from fungi and bacteria, to insects and mites. Plant galls are often highly organized structures and because of this the cause of the gall can often be determined without the actual agent being identified. This applies particularly to some insect and mite plant galls. In pathology, a gall is a raised sore on the skin, usually caused by chafing or rubbing.[2]

Insect galls are the highly distinctive plant structures formed by some herbivorous insects as their own microhabitats. They are plant tissue which is controlled by the insect. Galls act as both the habitat and food source for the maker of the gall. The interior of a gall can contain edible nutritious starch and other tissues. Some galls act as "physiologic sinks", concentrating resources in the gall from the surrounding plant parts.[3] Galls may also provide the insect with physical protection from predators.[4][5]

Insect galls are usually induced by chemicals injected by the larvae or the adults of the insects into the plants, and possibly mechanical damage. After the galls are formed, the larvae develop inside until fully grown, when they leave. In order to form galls, the insects must seize the time when plant cell division occurs quickly: the growing season, usually spring in temperate climates, but which is extended in the tropics.

The meristems, where plant cell division occurs, are the usual sites of galls, though insect galls can be found on other parts of the plant, such as the leaves, stalks, branches, buds, roots, and even flowers and fruits. Gall-inducing insects are usually species-specific and sometimes tissue-specific on the plants they gall.

It is worth noting that the fungus Ustilago esculenta associated with Zizania latifolia, a wild rice, produces an edible gall highly valued as a food source in the Zhejiang and Jiangsu provinces of China.[6]

Agrobacterium tumefaciens is an example of a gall-causing bacterium.

Mistletoe can form galls on its hosts

Galls are rich in resins and tannic acid and have been used in the manufacture of permanent inks (such as iron gall ink) and astringent ointments, in dyeing, and in tanning. A high-quality ink has long been made from the Aleppo gall, found on oaks in the Middle East; it is one of a number of galls resembling nuts and called "gallnuts" or "nutgalls". The yeast that makes lager beer possibly originated in galls on Patagonian beech trees[7].