The Ottawa Auditorium, was a 7,500 seat arena located in Ottawa, Ontario. It was located in Downtown Ottawa at the corner of O'Connor and Argyle Streets, today the site of the Ottawa YMCA. Built primarily for ice hockey, the arena was also used for sports events, assemblies and musical concerts.

It was built in 1923 with a 10,000-person capacity (seated and standing) to be the home arena of the NHL's Ottawa Senators by the Ottawa Auditorium Limited, a consortium controlled by T. Franklin Ahearn and Senators' owners Edgar Dey and Tommy Gorman. It replaced The Arena, built in 1907. The first NHL game held there was played on December 26, 1923 between Ottawa and the Montreal Canadiens, before 8300 fans, in which Howie Morenz scored his first NHL goal.[3]

The building was state-of-the-art for its time. For performances and assemblies, the arena had a concert stage that would be assembled at one end of the rink, facing the length of the rink. The shape of the ice was not quite orthogonal, it is described as being somewhat 'egg-shaped' with semi-circular end boards, rather than the straight end boards with rounded corners of today's ice rinks.[4] This design matched the shape of the rink at The Arena.

At the time of construction, the consortium took over the ownership of the hockey club as well. In 1924, Dey sold his share of the consortium and exited the rink business ending the Dey family's ownership of ice rinks in Ottawa dating back to the 1870s. In 1925, Gorman exited hockey in Ottawa, moving to New York to manage the New York Americans. Gorman sold his share to Ahearn, picking up ownership of the Connaught race track in Aylmer, Quebec. By 1930, the Auditorium was losing money as the Ottawa Senators losses increased. The Auditorium Limited debts to the Ahearn family would lead to the Senators NHL team suspending operations, then starting up again when capital was raised in 1932. By 1934, the Senators NHL franchise was moved to St. Louis, Missouri, becoming the St. Louis Eagles. The Senators were continued as a senior amateur hockey team playing out of the Auditorium. The move to St. Louis was not a success. The franchise was still a drain on the Auditorium and was folded by the NHL in 1935. In 1936, the Auditorium went into receivership and was controlled by the Royal Securities Corporation until 1945, when Gorman returned and purchased the building and the Senators. Gorman would remain an owner until he died in 1962.

The arena was demolished in 1967 and replaced at that location by the YMCA-YWCA building (180 Argyle Avenue). Its replacement, the Ottawa Civic Centre (arena) opened in 1967. It is located on Bank Street in The Glebe at Lansdowne Park. 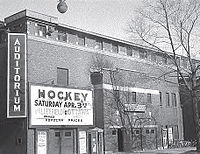 It was the home arena of the original NHL Senators from 1923 to 1934. In 1923, the Senators were the defending Stanley Cup champions and they opened the Auditorium on December 1, 1923 with an exhibition game against the Edmonton Eskimos, the team Ottawa had defeated to win the Stanley Cup. The game was attended by the Governor General Lord Byng and Lady Byng.

The Senators won the 1927 Stanley Cup in the Auditorium, the decisive game on April 13, 1927 against the Boston Bruins. The April 13 game at the Auditorium was the last Stanley Cup finals game in Ottawa until the June 2, 2007, game played at Scotiabank Place between the modern Senators and the Anaheim Ducks. It is known that one fan, Russell Williams, attended both games, both won by Ottawa.[5] It also held the final game of the 1924 Stanley Cup Finals between Montreal and Calgary because of its then state-of-the-art artificial ice, and the Montreal Forum had not yet been built.

After 1934, the NHL franchise relocated to St. Louis, Missouri, and the Ottawa Senators became a senior amateur team, first playing in the Quebec Amateur Hockey Association's 'Montreal Group.' The club won the Allan Cup Canadian amateur championship in 1949. From 1945 until 1954 the team played in the Quebec Senior Hockey League, becoming a professional team again in 1952. After the Senators folded in 1954, attributed to the rise of televised ice hockey matches, the professional Hull-Ottawa Canadiens played in the Auditorium.

The arena hosted games of the 1931 and 1958 Memorial Cup Canadian men's junior ice hockey championship finals. The Ottawa Junior Canadiens were the victors of the 1958 series against the Regina Pats.[4]

The arena hosted the annual "Minto Follies" displays of figure skating by Ottawa's Minto Skating Club, and in later years, performances of the Ice Follies.[6] Sonja Henie and her show both in her amateur and professional days performed at the Auditorium. The Auditorium hosted the 1923, 1931 and 1947 North American Figure Skating Championships.

It was also the site of many of the city's major events and concerts. Among the performers known to have performed there:

Ottawa radio station CFRA's first broadcast was from the auditorium on May 3, 1947 with a concert by Percy Faith and his 40 piece Orchestra, and a 60 voice choir to an audience of more than 10,000 people. Ottawa Mayor J. E. Stanley Lewis proclaimed the station "officially on the air".[8]

On April 3, 1957 Elvis Presley performed two shows. Along with a pair of performances in Toronto the previous day, this marked the first time he performed outside the U.S. More than 200 members of Parliament failed to turn up for an evening session in the House of Commons that day: most went to see Elvis instead.[9]

On April 24, 1964, The Rolling Stones performed one show at the Auditorium, by then owned by the YM-YWCA. The band did not perform again in Ottawa until 41 years later on 28 August 2005 at Frank Clair Stadium.[10]

The Auditorium was also the site of dance performances. On April 23, 1924 actress Louise Brooks appeared as one of the dancers of the Denishawn Dance Company at the Auditorium.[11]

The Auditorium was also the site of political conventions and election campaign rallies.[6]

The Auditorium contained a shop run by Hermes A. Proulx who hand-made hockey sticks to order. The sticks would be used by NHL players, and one exists from the 1934 All-Star Game.[12] Proulx, who had first made sticks in 1912 for the Hurd Company sports shop, went into business for himself in 1920. In 1925–26, he worked with the expansion New York Americans, before setting up his shop in the Auditorium in 1926. He hand-made sticks and sharpened skates at the shop until he retired in 1944. While he primarily worked for the Senators; the Bruins, Maple Leafs and Red Wings all used his sticks.[13]

The Auditorium held its final event on October 1, 1967; a concert by Guy Lombardo and his Royal Canadians.[14] The building was demolished and an YMCA complex took over the location. The Ottawa Civic Centre opened in December 1967.