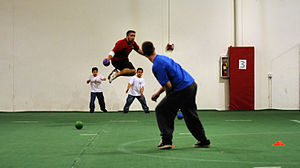 A dodgeball player doing a ball.

Dodgeball is any of a variety of games in which players try to hit other players on the opposing team with balls while avoiding being hit themselves. This article is about a well-known form of team sport with modified rules that is often played in physical education classes and has been featured in a movie, Dodgeball: A True Underdog Story. In the United States, the game is typically played among children 6-12 in elementary school. However, internationally, the sport has also emerged as a popular middle school, high school and college sport. It is also popular in informal settings and is often played on a playground, in a gym, or in organized recreational leagues.

There are many variations of the game, but generally the main objective of each team is to eliminate all members of the opposing team by hitting them with thrown balls, catching a ball thrown by a member of the opposing team, or forcing them to move outside the court boundaries when a ball is thrown at them.

After a player is eliminated, he may re-enter the match if another player on his team catches an opponent's thrown ball on the full (provided his team does not already have the maximum amount of players on the court). In some versions of dodgeball, where the game is played on a basketball court, if the ball is thrown into the opponent's basket or it is thrown and it hits the backboard on the full, everybody gets resurrected from the thrower's team. In some versions of the game, they make the players hit something else in order to revive the team. In some rule-sets, players must be resurrected in the order that they were defeated, but in others, the catching player may choose the player to resurrect.

Some leagues allow players that have been eliminated to assist their team by directing thrown balls back to the players on the court, while other leagues confine eliminated players to a designated area off the court and prohibit them from participating in the game until they are allowed back on the court.

Any number of dodgeballs may be used in a game, but between five to ten is common. Exceptions are usually made if a court is particularly small or if many people participate.

There is no standard worldwide measurement or material for a dodgeball;However, most dodgeballs are roughly the size of a volleyball and composed of foam with a thin plastic shell. Some dodgeballs are made of rubber. Some leagues allow the use of multiple sizes of dodgeballs in a single match, while others use one standard size for all balls. 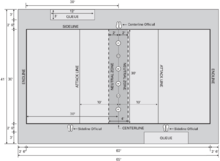 An example of a dodgeball court used in the National Dodgeball League.

A typical dodgeball game is usually played on a basketball court, netball court, gymnasium, parking lot, multiple tennis courts, fenced area or even an Australian Rules Football oval or soccer pitch. There is no fixed dodgeball court design. The game is picked on the best available surface that is usually one of the above mentioned. Unless it is a variation of dodgeball, the court must have a center line..

The uniform for playing dodgeball is usually physical education uniforms or short sleeve shirts, shorts and runners. Like the court, there is no fixed uniform. The players usually play in whatever clothing that they are wearing although they usually play in the clothing mentioned above. 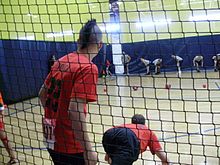 At the beginning of a dodgeball game, the balls are lined up on the central dividing line (in some versions of the game, the balls are thrown in the air for the players to catch or divided evenly to both the teams pre-match). The players then rush towards the center line simultaneously and try to grab one of the dodgeballs and throw or roll it backwards to their teammates (they cannot pick up a ball and throw it instantly). This is known as the opening rush. Once the game has commenced, players throw balls at members of the opposing team in an attempt to eliminate their players.

When a player has been hit by a dodgeball on the full (i.e., without hitting the roof, the floor, any of the walls, or an outside object and rebounding off) and no one catches it before it becomes dead, that player has been eliminated and must move to his team's designated bench area (players are still out if the ball rebounds off another dodgeball and/or player and hits them on the full). The same rule applies if any number of people try to catch the ball but drop it. Depending on the rules and variation, "headshots" (balls thrown in dodgeball that hit an opposing player in the head) may either result in the thrower being out, or the person being hit being out.

If a player catches a ball thrown by the opposing team on the full, then the player who threw the ball is eliminated and the team that caught the ball can reinstate the player that has been out the longest (some variations increase the reinstatement limit). As long as the ball has been caught in any way and is held for two seconds, the thrower is out (i.e., even if the ball is caught between the legs, the thrower is still out). If a dodgeball hits an opposing player but gets caught by one of the hit player's teammates, the thrower is out, a player gets reinstated, and the player who got hit stays in. If the dodgeball game is played on a basketball court and a player throws the ball and it goes into the opposing basket and/or it hits the basketball backboard on the full, the whole team gets resurrected. (The ball is still counted to have hit the backboard or scored a basket on the full if it rebounded off another dodgeball or it was deflected into the backboard by an opposing player). If the ball hits the backboard supports and/or the ring but fails to hit the backboard or go into the hoop, there is no effect. Players cannot be caught out if the ball hits the backboard, backboard supports, and/or the ring.

Players can pick up dead balls and throw them back at the other team. Players are allowed to leave the confines of the court to gather balls that have rolled out of bounds, but cannot throw the ball until they are back inside the court. A ball thrown from outside the court cannot eliminate an opponent who is hit. It only succeeds in getting the thrower automatically eliminated. If that ball however is caught on the full, the opposition can reinstate the player that has been out the longest from their team. A player who moves completely out of bounds when a ball is thrown at them and does not catch that ball is also eliminated. If a player moves into the opponent's zone or picks up a ball from inside the opponent's zone without it fully rolling inside their zone, that player is out. Players can also get eliminated if their throw hits an opponent on the head, displays bad sportsmanship, or cheats. Kicking the balls is prohibited.

Depending on the rules of a particular game, a ball in the possession of a player can be used to block incoming balls thrown by the opposing team.

Once all the players on one team are eliminated, the game ends.

In literature, dodgeball in which smaller or weaker children are forced to play against older and stronger children is sometimes depicted as licensed bullying for the amusement of cruel gym teachers.[1] Other writers retain better memories of it.[2]

In addition, the dangerous nature and associated risks of dodgeball have resulted in controversies, lawsuits, and calls to eliminate the game from school physical education programs.[4]

Similar in concept, Japanese dodgeball have rules not found in other variations of rule sets. For example, the number of steps a player can take after receiving the ball is limited. Only one ball is played. The type of ball used is also different from the type commonly used in North America.

In some American idioms, the act of avoiding something or someone mildly unpleasant can be referred to as 'playing dodgeball.' Additionally, in a variant of the same concept, the term "dodgeball" is sometimes used to describe a situation in which an individual is caught between two untenable positions, in a reference to the version of the game in which players from the same team can surround opposing players from two opposite sides.