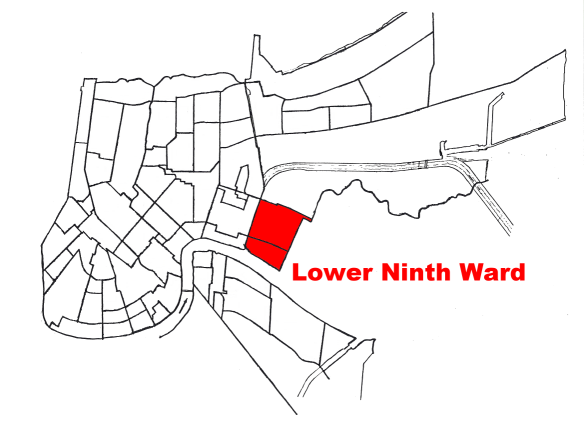 The term "Lower" refers to its location further towards the mouth of the , "down" or "below" the rest of the city in local geographic terminology. The area is sometimes just referred to as the "Lower 9". The area came to national attention for its tragic devastation in the aftermath of in 2005.

Excluding the industrial and swamp areas north of the Florida Canal, the neighborhood of the Lower 9th Ward is about 1.25 miles (2 km) from east to west and 2 miles (3.2 km) from north to south. Three major avenues cross the neighborhood paralleling the river, each with bridges over the Industrial Canal. Closest to the River is ; about midway through the neighborhood is . Most major businesses serving the neighborhood are on these two avenues, although a smattering of additional neighborhood business are located throughout the area. On the northern "back" side is Florida Avenue. The first two of these three avenues continue into St. Bernard Parish; a continuation of Florida Avenue through and beyond the Parish line has been repeatedly proposed but at present does not exist.

The Lower Ninth Ward is also commonly used to describe a slightly larger area. This area borders the Mississippi River to the South and Saint Bernard Parish to the east. To the west is the , across which is the Bywater section of New Orleans. The northern or inland boundary is often given as the with Florida Avenue, a levee, and railroad tracks running beside it. Alternatively, the industrial area north of Florida Avenue is sometimes included as being part of the Lower 9th Ward, extending the boundary to the .

As of the GR|2 of 2000, there were 14,008 people, 4,820 households, and 3,467 families residing in the neighborhood. The was 8,810 /mi² (3,417 /km²). The population is mostly , with the majority of the non-African American minority in the section of the neighborhood closer to the river. Although mostly working class, about 60% of the homes in the Lower Ninth Ward were owner occupied. [http://www.gnocdc.org/orleans/8/22/snapshot.html]

In 's colonial era this was land. The portion closer to the river was developed for residential use at the start of the 19th century at the same time as the Bywater area. In 1834 the established the here. As late as the 1870s the area behind St. Claude was still mostly small farms with scattered residences, and the area on the "woods" (away from the river) side of Claiborne mostly undeveloped cypress swamp.

What became the Lower 9th Ward did not become distinct from the parts of the 9th Ward just upriver until the Industrial Canal was dredged at the start of the 1920s, bisecting the 9th Ward. At this time, people started referring to the area "above" (up river) from the Canal as the "Upper" 9th Ward, and this area as the "Lower".

The Industrial Canal prompted development of the land further back along the Canal, and provided steady work for labor in the area. As shipping became containerized in the later 20th century, demand for labor declined with negative economic consequences on the neighborhood

In 1965, hit New Orleans. A on the Industrial Canal collapsed, flooding much of the Lower 9th Ward.

President visited the devastated flooded area shortly after the storm, and ordered aid for the storm victims.

In 2005, hit New Orleans. Multiple breaches in the levees of at least 4 canals resulted in catastrophic flooding of the majority of the city; see .

Nowhere in the city was the devastation greater than in the Lower 9th Ward, especially the portion from Claiborne Avenue back. flood waters appear to have poured into the neighborhood from at least three sources. To the east, water flowed in from Saint Bernard Parish, while to the west the Industrial Canal suffered two distinct major breaches: one a block in from Florida Avenue, the second back from Claiborne Avenue. The force of the water did not merely flood homes, but smashed or knocked many off their foundations. A large barge, the (owned by the ) came into the neighborhood through the breach near Claiborne Avenue, leveling homes beneath it as it floated in the flood waters. Storm surge was so great that even the highest portions of the Lower 9th were flooded; Holy Cross School, which had served as a dry refuge after , was inundated, and even the foot of the Mississippi River levee, the area's highest point, took on some 2 to 3 feet of water.

As of January 2006, the great devastation and difficulties in restoring basic utilities and city services have made the Lower 9th Ward the last portion of the city of New Orleans not yet officially reopened to residents who wish to return to live, and was the last area of the city still under a half a year after the disaster. Officially residents were allowed in during daylight hours to look, salvage possessions, and leave, although some few have already done extensive work gutting and repairing their damaged homes in preparation to move back.

The most severely damaged section of the Ward is the lower elevation section, north of Claiborne Avenue. A preliminary report suggested making this area in whole or part into park space. The suggestion is vehemently objected to by most Lower 9th Ward residents.

A group of residents and volunteers broke into Martin Luther King Elementary School in March 2006 to begin cleanup efforts. Not long after, the state school officials agreed to repair the school.

As of late 2006, a small number of local businesses in the area reopened and residents returned (many living in s). However, much of the area is still little populated and in ruined condition. Work crews continue to remove debris and demolish unrepairable houses daily, but hundreds if not thousands are vacant and gutted. Many more buildings are still little touched since the waters were drained, with ruined possessions still inside severely damaged buildings.

In 2006, Mayor threatened to use his powers of to seize vacant severely damaged property in all of New Orleans that had not been gutted or scheduled to be gutted before early 2007. Such blighted property has been creating serious problems for returned New Orleanians, including infestations of rats and other vermin. Similar movements to seize abandoned blighted property are in effect in other parishes as well as Mississippi counties effected by the storm. However as hundreds of thousands of locals are still waiting for promised insurance or money, many of the poor lack resources. The neighborhood has few stores and only a handful of schools reopened.

On December 3, 2007, The Make it Right Project initiated a campaign, along with actor , to rebuild 150 houses in the Lower Ninth Ward. The houses will be sustainable, earth friendly, and on stilts to prevent later flood damage. [ [http://www.makeitrightnola.org Make It Right 9 ] ] Contrary to an often repeated yet incorrect notion, the homes being built by the Make It Right Foundation are not free. The homes are financed through a series of available resources; insurance and Road Home proceeds, SBA funding as well as a low to no interest loan.

In March 2008, from the 8th to the 23rd, the Emerging Green Builders a committee of young professional and student members of the will be hosting Historic Green. This is a two week rebuilding effort within the Lower Ninth Ward bringing the historic preservation and sustainability communities together in conjunction with the residents of the Holy Cross Neighborhood to remediate and rebuild homes damaged during Hurricanes Katrina and Rita. [ [http://www.historicgreen.org HistoricGreen : New Orleans : March 8 - 23, 2008 ] ]

The Lower Ninth Ward is also home to the . The barracks now serve as headquarters for the , and had an extensive military museum in the old powder magazine and in a new annex, with a large collection of military items from every American war. The 2000 NRA Shooting Sports Camp and Coaches School was held at Jackson Barracks June 28 – July 2, 2000

The Doullut steamboat houses sit on either side of Egania Street in the lower ninth ward at numbers 400 and 503. The first house, closer to the river, was built in 1905 by Captain Milton P. Doullut as his home. The second was built in 1913 for his son Paul. In 1977 both houses were designated historic landmarks. The houses have two notable design influences, the first being the steamboats of the period, the second being the Japanese exhibit at the World's Fair of 1904 in St. Louis. Notably, Milton P. Doullut's wife was also a captain and is believed to be the first woman to have held a Mississippi riverboat pilot's license.

Major sections of the Mississippi River embankment along the Lower Ninth Ward and inside the Jackson Barracks were used for filming the 1994 movie adaptation of Anne Rice's "", starring Brad Pitt and Tom Cruise.

The section on the River side of Saint Claude Avenue which developed as an urban area first is sometimes called the "Holy Cross Neighborhood" for Holy Cross High School, the large there, which long drew students not only from the Lower 9th but from throughout the city.

* [http://www.gnocdc.org/orleans/8/22/snapshot.html Lower 9th Ward neighborhood snapshot] dealing with the area in back of St. Claude Avenue
* [http://www.gnocdc.org/orleans/8/20/snapshot.html Holy Cross neighborhood snapshot] dealing with the area from St. Claude to the River
* [http://www.davidmetraux.com/news/2006/hurricane_katrina_new_orleans_lower_ninth.html Photographs of Hurricane Katrina's aftermath in the Lower Ninth Ward]
* [http://www.wwltv.com/local/stories/WWL120905holycross.11aae56a.html Holy Cross School closes]
* [http://www.aap.cornell.edu/crp/people/rosa-exhibit.cfm Rebuilding the 9th Ward] A Slideshow of photographic portraits and interview recordings of residents of the 9th Ward, focusing on the post-Katrina rebuilding process
* [http://www.rebuildingtheninth.org/resources/ A People's Plan for Overcoming the Hurricane Katrina Blues] Neighborhood recovery plan for the 9th Ward produced by the ACORN/University Partnership