A dynamic equilibrium exists once a reversible reaction ceases to change its ratio of reactants/products, but substances move between the chemicals at an equal rate, meaning there is no net change. It is a particular example of a system in a steady state. In thermodynamics a closed system is in thermodynamic equilibrium when reactions occur at such rates that the composition of the mixture does not change with time. Reactions do in fact occur, sometimes vigorously, but to such an extent that changes in composition cannot be observed. Equilibrium constants can be expressed in terms of the rate constants for elementary reactions.

Henry's law may be derived by setting the chemical potentials of carbon dioxide in the two phases to be equal to each other. Equality of chemical potential defines chemical equilibrium. Other constants for dynamic equilibrium involving phase changes include partition coefficient and solubility product. Raoult's law defines the equilibrium vapor pressure of an ideal solution.

Dynamic equilibria can also exist in a homogeneous system. A simple example occurs with acid-base equilibria such as the "dissociation" of acetic acid, in aqueous solution.

At equilibrium the concentration quotient, K, the acid dissociation constant, is constant (subject to some conditions)

Dynamic equilibria can also occur in the gas phase as, for example, when nitrogen dioxide dimerizes.

In the gas phase, square brackets are not used as these indicate a concentration, instead a capitalised P is used to indicate partial pressure.[2]

Relationship between equilibrium and rate constants

In a simple reaction such as the isomerization: 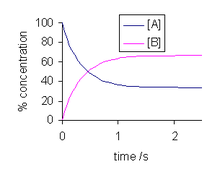 The solution to this differential equation is

and is illustrated at the right. As time tends towards infinity, the concentrations [A]t and [B]t tend towards constant values. Let t approach infinity, that is, t→∞, in the expression above:

In practice, concentration changes will not be measurable after

It follows that the equilibrium constant is numerically equal to the quotient of the rate constants.

In general they may be more than one forward reaction and more than one backward reaction. Atkins states[4] that, for a general reaction, the overall equilibrium constant is related to the rate constants of the elementary reactions by