The Mudumalai National Park and Wildlife Sanctuary Tamil:முதுமலை வனவிலங்கு காப்பகம், now also declared a Tiger Reserve, lies on the northwestern side of the Nilgiri Hills (Blue Mountains), in Nilgiri District, about 160 km (99 mi) north-west of Coimbatore in the westernmost part of Tamil Nadu, on the interstate boundaries with Karnataka and Kerala states in South India. Mudumalai, which means 'first hills’, is one of the first wildlife sanctuaries established in India. The sanctuary is divided into 5 ranges - Masinagudi, Thepakadu, Mudumalai, Kargudi and Nellakota.

Here one can often spot herds of endangered Indian elephants, vulnerable Gaur, and Chital. The sanctuary is a haven for Bengal Tigers and Indian Leopards and other threatened species. There are at least 266 species of birds in the sanctuary, including critically endangered species like the Indian White-rumped Vulture and the long-billed vulture.[2]

The Western Ghats, Nilgiri Sub-Cluster (6,000 km2 (2,300 sq mi)), including all of Mudumalai National Park, is under consideration by the UNESCO World Heritage Committee for selection as a World Heritage Site.[3]

The Mudumalai Sanctuary is as an important wildlife habitat due to its strategic position as a Wildlife corridor between several other protected areas that are a part of the Nilgiri Biosphere Reserve. To the north is the Bandipur National Park and Nagarhole National Park. To the west is the Wayanad Wildlife Sanctuary and in the south are Mukurthi National Park and Silent Valley National Park. To the east is the Segur plateau which connects to the Sathyamangalam wildlife sanctuary and Reserve forests and Biligirirangan Hills Wildlife Sanctuary. These parks, sanctuaries and the adjoining Reserve forests cover over 3,300 square kilometres (1,300 sq mi) of forest supporting a population of 1800-2300 elephants.[4] 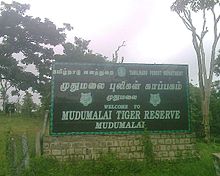 There are 48 tigers in the Nilgiri Reserve across which tigers are free to roam. In April, 2007, the Tamil Nadu state government declared Mudumalai as a Tiger Reserve, under section 38V of the Wildlife Protection Act of 1972, in an effort to conserve the country's dwindling Tiger populations. Subsequently, about 350 families living in the core area have been evicted from the park and given 1 million rupee ($20,800) compensation. Those in the 5 km buffer area around the park fear they too will be evicted, however, nobody will be dislodged from the buffer zone. In fact, some people in this zone will be involved in the project as trackers and guides to enhance their income through eco-tourism.[6] 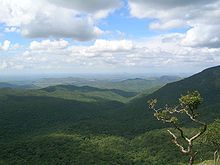 View of the forest 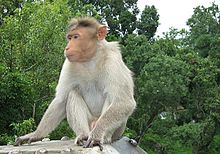 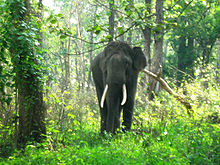 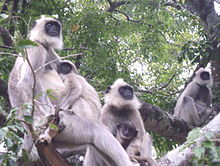 Family of Grey Langurs at Theppakadu

There are three main types of forest in the sanctuary: tropical moist deciduous occur in the western Benne Block, where rainfall is higher than in the other blocks. Tropical dry deciduous forest occurs in the middle and southern tropical dry thorn forests are in the east.

In addition there are patches of tropical semi ever green forest in the Southwest and Western part of Mudumalai. The annual rainfall there exceeds 2,000 mm (79 in). Tree species in this habitat include: Casseria ovoides, Litsea mysorensis, Cinnamomum malabatrum and Olea dioca. Climbers, including: Todalia asiatica, Sneeze Wort (Watakaka volubilis), Gnetum ula and Entada scandens are also found in these semi evergreen forests.

Moist Bamboo brakes are found amidst dry deciduous, moist deciduous and semi-evergreen forests and along the fringes of riparian forests and swamps. There are two species of bamboo found in Mudumalai, the giant clumping bamboos: Bambusa (arundinacea) and Dendrocalamus strictus. Elephants and Gaur eat both species of bamboo.

In all types of forest, a green strip of riparian forest is seen along the shore of dry seasonal and perennial streams. This type of forest remains green in all seasons. The plant species found here includes: Mangifera indica, Pongamia glabra, Terminalia arjuna, Syzygium cumini, Indian rosewood Dalbergia latifolia and the bamboos. Larger mammals such as elephant, gaur, sambar and tiger use riparian forest patches for feeding and resting.

This sanctuary is home to several species of wild relatives of cultivated plants including wild rice, wild ginger, turmeric, Cinnamon, Solanum, Guava, mango and pepper that act as a reserve gene pool for the cultivated plants.[5]

In certain places mixed vegetation types are present. The deciduous trees shed their green leaves during the summer, and adopt a floral garb while the arrival of the monsoons hails fruits and tender greens.[8]

There is a high diversity of animal life in the sanctuary with about 50 species of fishes, 21 species of amphibians, 34 species of reptiles, 227 species of birds and 55 species of mammal.

Mammal diversity is higher in the dry deciduous and dry thorn forests than in the other habitats. Thirteen percent of all mammal species in India are present in Mudumalai wildlife sanctuary. 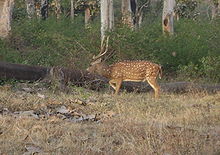 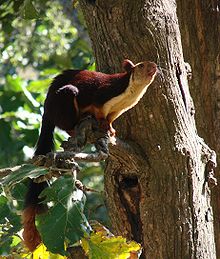 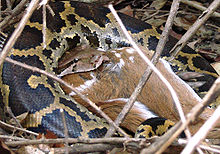 Mudumalai Tiger Reserve has the highest density of tigers in the country. For every 8.67 km2, there is now at least one tiger in Mudumalai.[9] There are 44 to 80 Tigers (E) in the Mudumalai forest. The single largest tiger population in India (Mudumalai - Nagarhole - Wynad) includes the Mudumalai tigers. These tigers are a breeding source for populating the Northern and Eastern parts of the Western Ghats. This population exists at high density due to the high density of prey species thriving in its deciduous forests.[10]

Important prey animals for tigers and panthers here are the Ungulates including the Gaur (Bos gaurus) (V), the Sambar Deer (Cervus unicolor) (VU), the Chital deer (Axis axis), Indian Muntjac (Muntiacus muntjak), the Indian Spotted Chevrotain, Moschiola indica, and the Wild Boar (Sus scrofa), all of whom are common here. 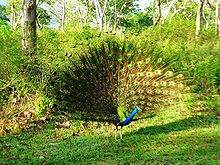 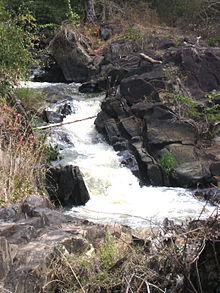 Attractions in the park include: 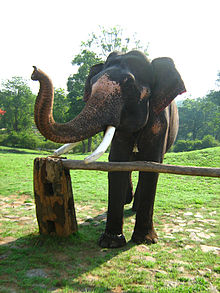 An lephant at the Mudumalai elephant camp 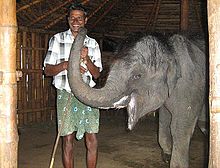 Wayanad Sanctuary: This sanctuary is the second largest wildlife sanctuary in Kerala. It is bestowed with lush green forests and rich wildlife. It houses some of the rare and endangered species of both flora and fauna. The sanctuary comes under Protect Elephant and one can spot herd of elephants roaming in the area.

Masinagudi: There are night safaris in open top jeeps arranged by resorts and guides who are freely accessible in Masinagudi. The night safaris are conducted on the peripheral roads running through the adjoining forest and not into the park. Such night safaris are illegal and create disturbance to the animals of this region. There was a recent incident of a French tourist being killed by a wild elephant when she went on one such safari.[citation needed]

The nearest international airport is at Coimbatore (140 km (87 mi)) and the closest railway station, is at Udhagamandalam (67 km (42 mi)). However, in terms of travel practicality, the convenient railway station is at Mysore (90 km (56 mi)), which is on the major broad gauge line and is served by trains from across the country.

The park is most conveniently accessible by road from Mysore on NH 212 to Gundlupet, then NH 67 to Teppakadu. A little past Bandipur cross the Ari Gouder bridge to a state border check post, passing here one will enter Mudumalai National Park.

Coming from Ooty there are two different routes. One is via Kallatty, 36 km (22 mi) from Ooty on the Masinagudi road that has 36 hairpin bends through natural forests. The other route is by NH 67 via Gudalur which is 67 km (42 mi) from Ooty.

There are regular bus services that connect all the major adjoining cities with this sanctuary. 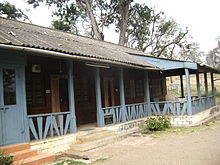 The forest department has cottages in various locations within the forests available on a first come first serve basis. These can be booked by calling the Ooty office at 0423 2445971. The payment needs to be made in advance.

There are various private resorts and guest houses that visitors can stay in.

Note: The text below seems to be an advertisement. Inn the wild is one of the most popular resorts within this area.With a sprawling 65-acreage of tropical wilderness near the Mudumalai forest of South India, Inn The Wild is home to a spectacular diversity of wildlife with the highlights being the majestic Asiatic elephant, the powerful Gaur (Indian bison), the elusive Indian leopard, and the endangered royal Bengal tiger. From tree houses to jungle shacks and from safaris to treks Inn the wild provides guests with an unforgettable experience. For more information visit www.innthewild.com

There are three post offices in the sanctuary. STD/ISD/PCO telephone service is available in Theppakadu, Masinagudi, Thorapalli and the nearby towns. The mobile phone network (BSNL) is available in the Sanctuary.[5]

Trees after a forest fire

Tourism, especially in the Segur/Masinagudi area, is claimed by some to pose a threat to the region, but this is strongly repudiated by persons who live and work in the area. The resorts do not hinder the movement of wild animals during migration, but misinformed amateur "nature lovers" continue to produce unscientific papers (such as this) that are full of untruths and misinformation. .[13]

The extensive growth of Invasive species, such as lantana, that hinder the natural regeneration process of the forests has occurred as a result of excessive cattle grazing.[8]

Construction activities of the proposed India-based Neutrino Observatory at Singara, Masinagudi, are likely to have significant impacts on the local wildlife. The 5 year work plan, high volume of debris and waste disposal, blasting activities, extensive vehicular activity and large number of outside workers and their support infrastructure all threaten to disrupt the wildlife corridor on the Sigeur plateau, including Mudumalai Sanctuary, connecting the Western ghats and Eastern Ghats.[14][15][16]