The Chishtī Order (Persian: چشتی - Čištī) is a Sufi order within the mystic branches of Islam which was founded in Chisht, a small town near Herat, Afghanistan about 930 CE. The Chishti Order is known for its emphasis on love, tolerance, and openness.[1] The doctrine of the Chishti Order is based on walāya, which is a fundamental notion of Islamic social, political and spiritual life. The Chishti’s were first exposed to this idea of walāya, from Sufi ideas, but developed two different categories of it: walāya of divine lordship (robūbīyat) and the walāya of divine love (moḥabbat).[2]

The order was founded by Abu Ishaq Shami (“the Syrian”) who introduced the ideas of Sufism to the town of Chisht, some 95 miles east of Herat in present-day western Afghanistan.[3] Before returning to Syria, where he is now buried next to Ibn Arabi at Jabal Qasioun [4] Shami initiated, trained and deputized the son of the local emir, Abu Ahmad Abdal.[5] Under the leadership of Abu Ahmad’s descendants, the Chishtiya as they are also known, flourished as a regional mystical order.[6]

Chishti master Inayat Khan (1882–1927) was the first to bring the Sufi path to the West, arriving in America in 1910 and later settling near Paris, France. His approach exemplified the tolerance and openness of the Chishti Order, following a custom began by Moinuddin Chishti of initiating and training disciples regardless of religious affiliation and which continued through Nizamuddin Auliya and Shah Kalim Allah Jahanabadi. Chishti master Mido Chishty has taken teachings of the order to develop FUZN. This has proven popular in the Middle East, Australia and California.

The Chishti Order is famous for its emphasis on love, tolerance, and openness. The order traces its spiritual origin through various saints all the way to the Islamic caliph Ali and from him to the Islamic prophet Muhammad.

The Chishti saints had two hallmarks which differentiate them from other Sufi saints. The first was their ethical relations to the institutional powers. This meant voluntarily keeping a distance from the ruler or the government mechanism.[7] It didn't matter if the ruler was a patron or a disciple: he was always kept at bay since it was felt that mixing with the ruler will corrupt the soul by indulging it in worldly matters. In his last discourse to disciples, Khawaja Moinuddin Chishti said:

The second distinctive dimension was related to the religious practice of the Chishtis. It was proactive rather than passive; a ceaseless search for the divine other. In this respect the Chishtis followed a particular ritual more zealously then any other brotherhood. This was the practice of sama, evoking the divine presence through song or listening to music.[9] The genius of the Chishti saints was that they accommodated the practice of sema with the full range of Muslim obligations.[10]

The Chishti Order can be characterized by the following principles[citation needed]:

The early mystics of the Chishti Order in India used two sources as the official guide books of their faith. The first being the ʿAwārif al-Maʿārif of S̲h̲ayk̲h̲S̲h̲ihāb al-Dīn Suhrawardī and the second being Kashf al-Maḥd̲j̲ūb of Hud̲j̲wīrī in which the elder saints would teach their disciples about the organization of their khānaḳāhs. Chishti Mystic Ideology revolved around a few basic understandings. The first being the concept of waḥdat al-wud̲j̲ūd (Unity of Being) which not only determined their social outlook, but was also classified as their motive force to their mystic mission. Chishti Mystic Ideology also looked down upon possession of private property because it was a negation of faith in God, and followed the idea of living and working for a healthy social order that got rid of all conflicts and discriminations. The Chishtis also believed in no form of contact with the state. One source noted this through the saying: ‘“There are two abuses among the mystics”, says an early Čis̲h̲tī mystic, “d̲j̲irrat and muḳallid. Muḳallid is one who has no master; d̲j̲irrat is one who visits kings and their courts and asks people for money”’. Finally Chishti Ideology also entails the basic understanding in living for the Lord alone (summum bonum) and not demanding formal conversion to Islam as a pre-requisite to initiation in the mystic order.[11]

In order to connect with Allah on a personal and emotional level, the Chishtis were known for 5 basic practices.[12]

The Chishti’s are known for their literature of conversations of the shaykhs collected by their disciples called malfūẓāt. Most malfuzats contain specific knowledge about the insight of thought and practice to the Chishti order while others contain poetry and letters written by famous members of the order.[13] 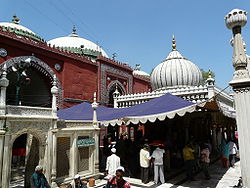 The Chishti Order is now indigenous to Afghanistan and South Asia (mainly India, Pakistan and Bangladesh). It was the first of the four main Sufi Orders (Chishtia, Qadiriyya, Suhrawardiyya and Naqshbandi) to be established in this region. Moinuddin Chishti introduced the Chishti Order in India, sometime in the middle of the 12th century AD. He was eighth in the line of succession from the founder of the Chishti Order, Abu Ishq Shami. The devotees of this order practise chilla i.e. they observe seclusion for forty days during which they refrain from talking beyond what is absolutely necessary, eat little and spend most of their time in prayers and meditation. Another characteristic of the followers of this order is their fondness for devotional music. They hold musical festivals, and enter into ecstasy while listening to singing. In general, the doctring of the Chishti Order in South Asia is based around social equality, tolerance, and spiritual discipline and has been the most prominent Sufi brotherhood since the 12th century.[15]

After Fariduddin Ganjshakar, the Chishti Order of South Asia split into two branches. Either branch was named after one of Ganjshakar's successors:

Over time (principally after the 17th century) many further branches emerged which routinely united or diverged towards other popular Sufi orders in South Asia. Prominent people of later times who trace their spiritual lineage through the Chishti order include:

As a result of this metamorphosis of the Chishti order with other branches, most Sufi masters now initiate their disciples in all the four major orders of South Asia: Chishti, Suhrawadi, Qadri and Naqshbandi. They do however, prescribe prayers and litanies, only of the order with which they are primarily associated.

The Chishti Order acknowledges six walis, who were all masters of the Chishti Order, the first and most prominent being Shaykh Mu’in ad-Din Chishti, who brought the teachings of the silsilah to India in the twelfth century CE, followed by Shaykh Qutb ad-Din Bakhtiyar kaki, Shaykh hamid ad-Din Suwali nagauri, Shaykh Farid ad-Din Ganj-i-Shakar, Shaykh nizam ad-Din Awilya, and Shaykh Alauddin Sabir Kaliyari.

Other notable members include: