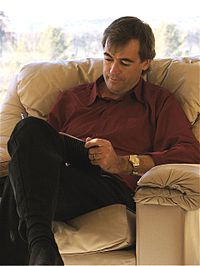 David Vernon (born 1965 in Canberra, Australia) is an Australian writer. He has published several books relating to scepticism and childbirth.

Vernon is the only son of Michael Vernon and Jeanette Vernon. He established two businesses while at University, Whiahwe Waiting Services that provided catering to diplomatic missions in Canberra, and MangoSoft, a software development house. He graduated from the Australian National University with qualifications in political science and economics in 1988. He subsequently obtained a Graduate Diploma in Law from University of Canberra and completed a Master of Environmental Science from Griffith University. He was editor of Argos, the Journal of the Canberra Skeptics from 1986 until 1991. He was assistant editor of the Australian Sinclair Gazette. He later became a contributor to the journal of the Australian Skeptics, The Skeptic. He writes occasional science articles for The Canberra Times and also writes short stories for adults[1] and children.

He co-edited the book Skeptical - A handbook of pseudoscience and the paranormal in 1989 with Donald Laycock, Colin Groves and Simon Brown. In 2005 he released Having a Great Birth in Australia, which examined the culture of childbirth and pregnancy in Australia. In 2006 his book Men at Birth which chronicles men's experience of birth, was published. On 31 May 2007, With Women was released. He is currently working on The Hunt for Marasmus[2] and a book about perinatal depression called Australians Talk - surviving perinatal depression.[3]

He is married to Barbara Vernon with two children.