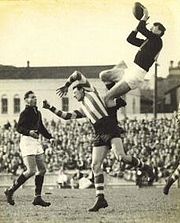 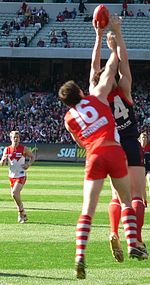 A mark is a skill in Australian rules football where a player cleanly catches (is deemed to have controlled the ball for sufficient time) a kicked ball that has travelled more than 15 metres without anyone else touching it or the ball hitting the ground.

It is a distinctive part of the game. Although catching the ball is also found in other codes of football, along with kicking the ball, it is one of the most prevalent skills in Australian Football. Marking can also be one of the most spectacular and distinctive aspects of the game, and the best mark of the AFL season is awarded with the Mark of the Year, with similar competitions running across smaller leagues.

The top markers in the Australian Football League, like Lance Franklin, Jason Dunstall and Jonathan Brown take an average of over 8 marks per game.[1] An AFL match between St Kilda and Port Adelaide in 2006 set a record of 303 marks in a single game.[2]

Upon taking a mark, the umpire will blow their whistle to signify the mark and a player is entitled to an unimpeded kick of the ball, to advance his team towards their goalposts. The nearest opposition player stands on the spot where the player marked the ball, which is also known as the mark, and becomes the man on the mark. When taking the set kick, the player must either play on or kick the ball over the mark.

The criterion for a mark is that it is caught cleanly, i.e. the player has complete control of the ball, for any length of time. As such, if the ball is caught in one grab, and then punched out from between the player's hands, a mark is paid, even if he has held it for only an instant. Similarly, if a ball is controlled, and then dislodged by another player or the ground, the mark will still be paid.

If two players mark the ball simultaneously, the umpire is obliged to award the mark to the man in front, i.e. the player who has the front position in the marking contest; if he cannot determine which player is in front, then a ball-up will result.

The mark has been included in the compromise rules used in the International Rules Football series between teams from Australia and Ireland since 1984.

Origins of the mark

Various forms of football descended from English public school football games of the 19th century have featured a fair catch or mark. It was abolished early in the development of association football (soccer) but still exists in rugby union and American football.

The mark has been one of the most distinctive features of Australian Football since rules were drawn up in 1859.

Some people claim that the origin of the term 'mark' comes from the practice of a player who has just taken a mark physically marking the ground with his foot, or cap which formed part of the attire worn by players in the 19th century, to show where he took the fair catch.

Others claim that the origin of the mark comes from the traditional Aboriginal game of Marn Grook, which is said to possibly have influenced Tom Wills writing of the laws of the game. It is claimed that in Marn Grook, jumping to catch the ball, called "mumarki", an Aboriginal word meaning "to catch" results in a free kick. Some counterclaim this theory as false etymology. 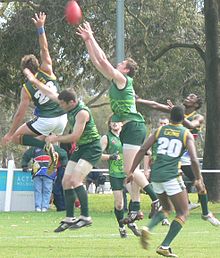 In Australian Football, marks are often described in combination of the following ways.

While the Mark of the Year competition has produced many famous marks, other marks include:

In the 1970 Grand Final before a record crowd, Carlton full forward, and giant of the game, Alex Jesaulenko, took one of the most inspirational marks in the history of 'the Australian game' leaping high for a specky over Collingwood's Graeme Jenkin just before half time, to help inspire a Carlton side that was behind by 44 points at the half.

Sydney's Leo Barry leapt into history with his match-saving mark in the final seconds of the 2005 grand final against the West Coast Eagles to seal the game. His contested overhead mark was taken in a congested pack of 3 teammates and 3 opposition players.

Shaun Smith's and Gary Ablett's shared title of Mark of the Century.

St Kilda/South Melbourne player Roy Cazaly was renowned for his high marks, giving rise to the catchphrase and song "Up There Cazaly".

Spoiling is the technique typically employed by opposition defenders to legally stop a player from catching the ball. Spoiling is performed by hand or fist (as a punching action) either before or shortly after the player has caught the ball in their hands.

The rules are quite strict on defensive spoiling methods. Players are not allowed to push other players out of marking contests or make forceful front on contact with an opponent in a marking contest, if they are not simultaneously attempting to mark or spoil the ball. Also, no high contact is allowed unless such contact is incidental to attempting to mark or spoil the ball.

Deliberately taking, hacking or chopping the arms is an infringement committed by defenders which will result in a free kick.

The arm interference free kick was introduced as a specific free kick in the AFL and its affiliates in 2005, although it was paid as a blocking, striking or holding free kick previously. The free kick was designed predominately to make it easier for forwards to take contested marks by not allowing defending player to punch or pull a marking player's outstretched arms in a marking contest.[3]

The rule was introduced by the AFL amidst on-going calls from fans and commentators to take action against the defensive tactic of flooding; the rule does directly limit the effectiveness of defenders, but the AFL has never stated whether or not flooding was the reason for the change.[3]

Marking can cause injuries to hands and fingers including hyperextension, joint and tendon damage, dislocation and fractures. Over a long period of time and with re-injury there can be long term effects such as chronic injury and debilitating arthritis. To overcome these injuries, some players will strap problem fingers together, whole hands, wear splints or gloves.

Some of these injuries require surgery and extended recovery, threatening professional careers. AFL players whose careers were threatened by such injuries include Robert Campbell, Fraser Gehrig, Brett Backwell and Daniel Chick. Some players, such as Backwell and Chick have opted for amputation of digits in a bid to extend their playing careers and continue to mark the ball.