Patients with intraparenchymal bleeds have symptoms that correspond to the functions controlled by the area of the brain that is damaged by the bleed.[3] Other symptoms include those that indicate a rise in intracranial pressure due to a large mass putting pressure on the brain.[3] Intracerebral hemorrhages are often misdiagnosed as subarachnoid hemorrhages due to the similarity in symptoms and signs. A severe headache followed by vomiting is one of the more common symptoms of intracerebral hemorrhage. Some patients may also go into a coma before the bleed is noticed. 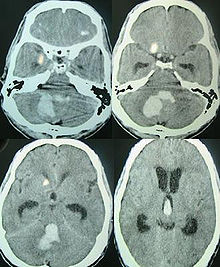 Intracerebral bleeds are the second most common cause of stroke, accounting for 30–60% of hospital admissions for stroke.[1] High blood pressure raises the risks of spontaneous intracerebral hemorrhage by two to six times.[1] More common in adults than in children, intraparenchymal bleeds due to trauma are usually due to penetrating head trauma, but can also be due to depressed skull fractures. Acceleration-deceleration trauma,[4][5][6] rupture of an aneurysm or arteriovenous malformation (AVM), and bleeding within a tumor are additional causes. Amyloid angiopathy is a not uncommon cause of intracerebral hemorrhage in patients over the age of 55. A very small proportion is due to cerebral venous sinus thrombosis. Infection with the k serotype of Streptococcus mutans may also be a risk factor, due to its prevalence in stroke patients and production of collagen-binding protein.[7]

Risk factors for ICH include:[8] 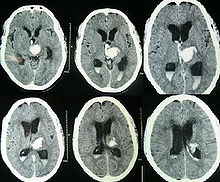 Intraparenchymal hemorrhage can be recognized on CT scans because blood appears brighter than other tissue and is separated from the inner table of the skull by brain tissue. The tissue surrounding a bleed is often less dense than the rest of the brain due to edema, and therefore shows up darker on the CT scan.

Treatment depends substantially of the type of ICH. Rapid CT scan and other diagnostic measures are used to determine proper treatment, which may include both medication and surgery.

Surgery is required if the hematoma is greater than 3 cm, if there is a structural vascular lesion or lobar hemorrhage in a young patient.[10]

The risk of death from an intraparenchymal bleed in traumatic brain injury is especially high when the injury occurs in the brain stem.[2] Intraparenchymal bleeds within the medulla oblongata are almost always fatal, because they cause damage to cranial nerve X, the vagus nerve, which plays an important role in blood circulation and breathing.[4] This kind of hemorrhage can also occur in the cortex or subcortical areas, usually in the frontal or temporal lobes when due to head injury, and sometimes in the cerebellum.[4][13]

The inflammatory response triggered by stroke has been viewed as harmful, focusing on the influx and migration of blood-borne leukocytes, neutrophils, and macrophages. New area of interest are the Mast Cells.[15]

It accounts for 20% of all cases of cerebrovascular disease in the US, behind cerebral thrombosis (40%) and cerebral embolism (30%).[16]

It is two or more times more prevalent in black American patients than it is in white.[17]