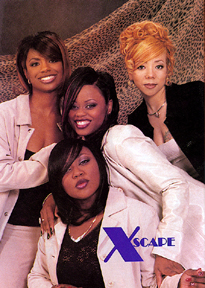 Sisters LaTocha and Tamika Scott's father, Rev. Randolf Scott, was part of the 1970s group Scott Three. The sisters sang at church throughout their childhoods while being trained by their father. In 1990, they met the other two members, Burruss and Cottle, in , a suburb of Atlanta. [cite web|url=http://www.allmusic.com/cg/amg.dll?p=amg&sql=11:fxfyxqwgldse|title=Xscape: Biography|last=Bush|first=John |publisher=allmusic.com|accessdate=2008-08-04]

In , 1998, Xscape released their third album, "", and released the singles, "The Arms Of The One Who Loves You", "My Little Secret", "Am I Dreamin", and "Softest Place on Earth". After the release of this album, the group parted ways.

After a five year hiatus, sisters LaTocha and Tamika Scott reunited with Tameka "Tiny" Cottle. They replaced with Kiesha Miles, to release a new album "Unchained". They released the single, "What's Up". [cite web|url=http://www.s2smagazine.com/content/content.asp?issueid=200503&listid=01|title=Xscape breaks the chains by Jamie Foster Brown with the assistance of Ericka Boston and Calvin Terrell|publisher=s2smagazine.com]

Scott released the single, "Day & Night" in . She also appeared in the 2004 play "", as Millet Jenay Baptiste-Brown. She has written, produced, and arranged four songs for and is featured as a solo artist on the Tyler Perry movie soundtrack, "Daddy's Little Girls". The soundtrack was released , 2007, on . She also appeared on the soundtrack for Perry's film "". [cite web|url=http://www.singersroom.com/interview/artist-v-59.asp|title=Tamika Scott: High Definition|last=Omisore|first=Adeniyi |date=2007-03-27|publisher=singersroom.com|accessdate=2008-08-04]

Cottle, along with Kandi Burruss, wrote TLC's 1999 hit, "", in which Tiny lends her vocals, singing the hook of "No Scrubs". Cottle also sings background vocals to 's song, "I Know You See Me", on 's single, "Let's Get Down", and on 's, "Things We Used To Do". Cottle has been in the studio working on tracks for a future album and has been producing more tracks for her new group, the Ga.p Girls, with former replacement Xscape member Keisha "Babi" Miles. [cite web|url=http://www.s2smagazine.com/content/content.asp?issueid=200608&listid=15|title=T.I. visits S2S and he brings his crew and Tiny with him|date=2006-08|publisher=s2smagazine.com|accessdate=2008-08-04]