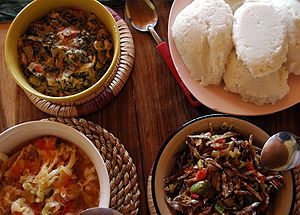 Nshima or nsima or Bidia is a cornmeal product and a staple food in Zambia, Malawi and the Kasai Oriental and Kasai Occidental provinces of the Democratic Republic of Congo. It is made from ground maize (corn) flour known locally as mealie-meal. Nshima is very similar to ugali or posho of East Africa, sadza of Zimbabwe, pap of South Africa and fufu of West Africa.

Maize was introduced to Africa from the Americas between 16th and 17th century. Prior to this, sorghum and millet were the principal cereals in most of Sub-Saharan Africa. Maize was readily accepted by African farmers as its cultivation was very similar to that of sorghum but with significantly higher yields. Eventually maize displaced sorghum as the primary cereal in all but the drier regions. Nshima is still made from sorghum flour though it is quite uncommon to encounter such. Cassava, which was also introduced from the Americas, can also be used to make nshima, either exclusively or mixed with maize flour, and is considered a delicacy by some.

The maize flour is first boiled with water into porridge and then skillfully 'paddled', not stirred, to create a thick paste with the addition of more flour. Zambians consider cooking nshima an art form with the aim of achieving the correct texture and taste. Malawians look at the whole process from cooking to eating as an art.

Nshima is almost always eaten with two side dishes, known as "relishes": a protein source, usually meat, poultry, fish or groundnuts (peanuts); and a vegetable, often rapeseed, chibwabwa (pumpkin leaves) or cabbage. The sides are known as Ndiwo or Umunani in chichewa. In Malawi, this is often accompanied with hot peppers or condiments like home made hot pepper sauces from peri-peri or Kambuzi chili peppers or store bought commercial sauces like Nali Sauce.

Traditionally diners sit around a table or on the floor surrounding the meal. The diners have to wash their hands as nshima is eaten with bare hands. This is done with a bowl of water. Alternatively the host or one of the younger people present pours water from a pitcher over the hands of the elders or guests into a receptacle bowl. Eating is done by taking a small lump into ones palm, rolling it into ball and dipping it into the relish. An indentation in the nshima ball can be made to help scoop the relish or gravy. As with many African traditions, age is very important. Washing before the meal, eating and washing after the meal generally starts with the oldest person, followed by everyone else in turn by age.

Many Zambians and Malawians take their nshima very seriously with some considering any meal without it a mere snack.

Nshima is relatively cheap and affordable for most of the population, although occasionally prices have risen due to shortages, contributing to economic and political instability.