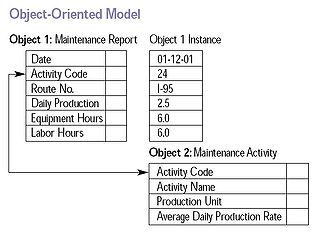 Example of an object-oriented model.[1]

Object databases have been considered since the early 1980s and 1990s, they may be slower in simple mass commercial data transaction. Object databases main usage is in object oriented areas.

As the usage of web-based technology increases with the implementation of Intranets and extranets, companies have a vested interest in OODBMS to display their complex data. Using a DBMS that has been specifically designed to store data as objects gives an advantage to those companies that are geared towards multimedia presentation or organizations that utilize computer-aided design (CAD).[2]

Object database management systems grew out of research during the early to mid-1970s into having intrinsic database management support for graph-structured objects. The term "object-oriented database system" first appeared around 1985.[3] Notable research projects included Encore-Ob/Server (Brown University), EXODUS (University of Wisconsin–Madison), IRIS (Hewlett-Packard), ODE (Bell Labs), ORION (Microelectronics and Computer Technology Corporation or MCC), Vodak (GMD-IPSI), and Zeitgeist (Texas Instruments). The ORION project had more published papers than any of the other efforts. Won Kim of MCC compiled the best of those papers in a book published by The MIT Press.[4]

Starting in 2004, object databases have seen a second growth period when open source object databases emerged that were widely affordable and easy to use, because they are entirely written in OOP languages like Smalltalk, Java or C#, such as db4o (db4objects), DTS/S1 from Obsidian Dynamics and Perst (McObject), available under dual open source and commercial licensing.

Object databases based on persistent programming acquired a niche in application areas such as engineering and spatial databases, telecommunications, and scientific areas such as high energy physics and molecular biology.

Another group of object databases focuses on embedded use in devices, packaged software, and real-time systems.

Most object databases also offer some kind of query language, allowing objects to be found by a more declarative programming approach. It is in the area of object query languages, and the integration of the query and navigational interfaces, that the biggest differences between products are found. An attempt at standardization was made by the ODMG with the Object Query Language, OQL.

Access to data can be faster because joins are often not needed (as in a tabular implementation of a relational database). This is because an object can be retrieved directly without a search, by following pointers. (It could, however, be argued that "joining" is a higher-level abstraction of pointer following.)

Another area of variation between products is in the way that the schema of a database is defined. A general characteristic, however, is that the programming language and the database schema use the same type definitions.

Multimedia applications are facilitated because the class methods associated with the data are responsible for its correct interpretation.

Many object databases, for example VOSS, offer support for versioning. An object can be viewed as the set of all its versions. Also, object versions can be treated as objects in their own right. Some object databases also provide systematic support for triggers and constraints which are the basis of active databases.

The efficiency of such a database is also greatly improved in areas which demand massive amounts of data about one item. For example, a banking institution could get the user's account information and provide them efficiently with extensive information such as transactions, account information entries etc. The Big O Notation for such a database paradigm drops from O(n) to O(1), greatly increasing efficiency in these specific cases.

The characteristics of ODBMS are separated into three groups as follows:

The Object Data Management Group (ODMG) was a consortium of object database and object-relational mapping vendors, members of the academic community, and interested parties. Its goal was to create a set of specifications that would allow for portable applications that store objects in database management systems. It published several versions of its specification. The last release was ODMG 3.0. By 2001, most of the major object database and object-relational mapping vendors claimed conformance to the ODMG Java Language Binding. Compliance to the other components of the specification was mixed. In 2001, the ODMG Java Language Binding was submitted to the Java Community Process as a basis for the Java Data Objects specification. The ODMG member companies then decided to concentrate their efforts on the Java Data Objects specification. As a result, the ODMG disbanded in 2001.

Many object database ideas were also absorbed into SQL:1999 and have been implemented in varying degrees in object-relational database products.

In 2005 Cook, Rai, and Rosenberger proposed to drop all standardization efforts to introduce additional object-oriented query APIs but rather use the OO programming language itself, i.e., Java and .NET, to express queries. As a result, Native Queries emerged. Similarly, Microsoft announced Language Integrated Query (LINQ) and DLINQ, an implementation of LINQ, in September 2005, to provide close, language-integrated database query capabilities with its programming languages C# and VB.NET 9.

In February 2006, the Object Management Group (OMG) announced that they had been granted the right to develop new specifications based on the ODMG 3.0 specification and the formation of the Object Database Technology Working Group (ODBT WG). The ODBT WG planned to create a set of standards that would incorporate advances in object database technology (e.g., replication), data management (e.g., spatial indexing), and data formats (e.g., XML) and to include new features into these standards that support domains where object databases are being adopted (e.g., real-time systems). The work of the ODBT WG was suspended in March 2009 when, subsequent to the economic turmoil in late 2008, the ODB vendors involved in this effort decided to focus their resources elsewhere.

In January 2007 the World Wide Web Consortium gave final recommendation status to the XQuery language. XQuery uses XML as its data model. Some of the ideas developed originally for object databases found their way into XQuery, but XQuery is not intrinsically object-oriented. Because of the popularity of XML, XQuery engines compete with object databases as a vehicle for storage of data that is too complex or variable to hold conveniently in a relational database. XQuery also allows Modules to be written to provide Encapsulation features that have been provided by Object-Oriented systems.

An object database stores complex data and relationships between data directly, without mapping to relational rows and columns, and this makes them suitable for applications dealing with very complex data.[9] Objects have a many to many relationship and are accessed by the use of pointers. Pointers are linked to objects to establish relationships. Another benefit of an OODBMS is that it can be programmed with small procedural differences without affecting the entire system.[10] This is most helpful for those organizations that have data relationships that are not entirely clear or need to change these relations to satisfy the new business requirements.

Object oriented databases use SQL query language like notations to express the queries which is called as Object Query Language (OQL).[11] OQL supports all the mandatory features or characteristics of ODBMS to make efficient object database systems. It supports complex data objects, path expressions, operation invocation, inheritance, object extensions for object identity. OQL is a very efficient way of expressing object queries, it keeps object's integrity by using objects implemented methods, rather than its own operations. OQL can also be embedded in other languages like C++, java,.. "OQL is a functional (expression-oriented) language, in which each query is a typed expression (type can be atomic object,collection object, or literal)". OQL doesn't have explicit update operations, like insert, delete to update database.But as an alternative, it can invoke state-altering methods, create(), add(), and delete(), etc., to get similar functions. For example,

creates a new Employee object with necessary attributes data. Like SQL we can write separate function to perform certain task.