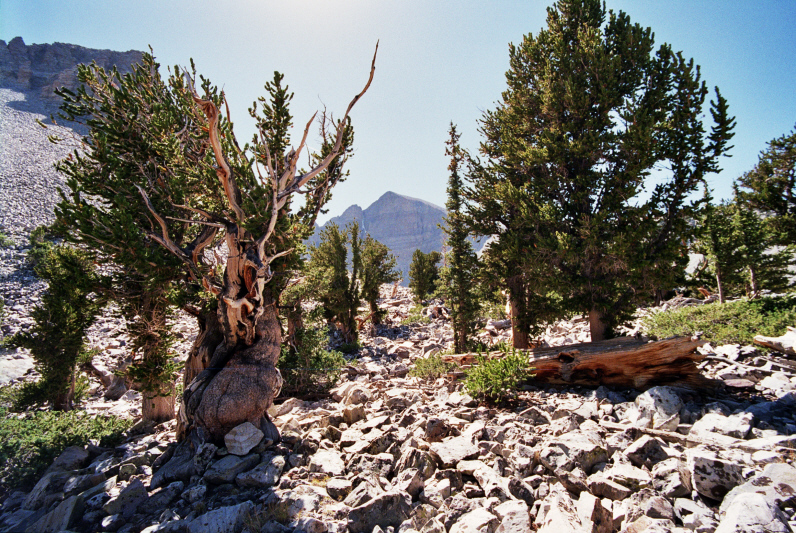 There are three closely related species of bristlecone pine:
* "Pinus aristata" in , and
* "Pinus longaeva" in , and eastern
* "Pinus balfouriana" in

Bristlecone pines grow in isolated groves at and just below the . Because of cold temperatures, dry soils, high winds, and short growing seasons, the trees grow very slowly. The wood is very dense and resinous, and thus resistant to invasion by insects, fungi, and other potential pests. As the tree ages, much of its layer may die. In very old specimens, often only a narrow strip of living tissue connects the roots to a handful of live branches.

The oldest single living organisms known are bristlecone pines, though some plants such as or form clonal colonies that may be many times older. Recently, Swedish researchers discovered a self-cloning spruce in Dalarna that has been dated to just under 10,000 years old [http://news.bbc.co.uk/1/hi/world/europe/7353357.stm] [http://www.info.umu.se/NYHETER/PressmeddelandeEng.aspx?id=3061] . The existing growth in clonal colonies sprang as shoots from older growth so there is an unbroken chain of life that sometimes dates back several tens of thousands of years. However, the original ancient growth in these colonies is long dead. The oldest bristlecone pines are single plants that have been alive for a little less than 5,000 years. These very old trees are of great importance in or tree-ring dating.

The oldest (acknowledged) living organism known is a bristlecone pine tree nicknamed "Methuselah" (after , the longest-lived person in the ). Methuselah is located in the in the White Mountains of eastern , however its precise location is undislosed by the to protect the tree from vandalism. The age of Methuselah was measured by core samples in 1957 to be 4,789 years old.

, a student of the University of North Carolina, was taking core samples of bristlecones in when he discovered that "Prometheus" was over 4,000 years old. His broke, so the U.S. Forest service granted permission to Mr. Currey to cut down "Prometheus". After Prometheus had been felled, 4,844 rings were counted on a cross-section of the tree, making "Prometheus" at least 4,844 years old, the oldest non-clonal living thing known to man. [cite news|url=http://www.sfgate.com/cgi-bin/article.cgi?file=/chronicle/archive/1998/08/23/SC72173.DTL|title=Staying Alive|first=Carl|last=Hall|publisher=San Francisco Chronicle|date=1998-08-23]

The other two species, "Pinus balfouriana" and "Pinus aristata" are also long-lived, though not to the extreme extent of "P. longaeva"; specimens of both have been measured or estimated to be up to 3,000 years old. It is rumored that a specimen older than "Methuselah" has been discovered, but this has not been widely publicized.