Catch Me If You Can

Catch Me If You Can

Infobox Film
name = Catch Me if You Can 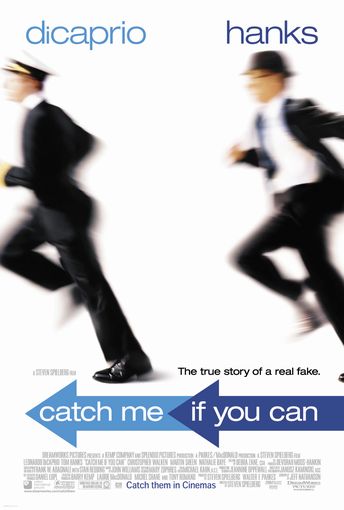 "Catch Me if You Can" is a 2002 film loosely based on Frank Abagnale Jr.'s . directed the film, which stars as Abagnale, as well as , , , and . "Catch Me If You Can" tells the story of Frank Abagnale Jr. who, before his 19th birthday, successfully conned millions of dollars' worth of checks as a pilot, Georgia doctor and .

Development for the film started as far back as 1980. With the beginning of the 21st century, filmmakers such as , , , and were at one point involved with "Catch Me if You Can". Spielberg (who was originally involved as producer) decided to become the project's director, dropping out of "" and "Memoirs of a Geisha". Filming took place from February to May 2002. "Catch Me If You Can" received financial and critical success, and the real Abagnale greeted the film positively. A Broadway musical adaptation, (with the same title as the film) is in development.

Frank Abagnale Jr (), 15 years old, lives happily in 1963 with his father Frank Abagnale Sr (), and French mother Paula (). When a loan for Frank Sr. is denied at , due to a series of IRS tax frauds by Frank Sr, the family is forced to move from their grand home to a small apartment. Paula carries an affair with Jack (), a friend of her husband. In the meantime, Frank poses as a substitute teacher in his French class. Frank's parents file for divorce, and Frank runs away. When he runs out of money, he begins to use confidence scams. Frank's cons grow ever bolder and he even impersonates an airline pilot. He forges Pan Am payroll checks and succeeds in stealing more than $2.8 million.

Meanwhile Carl Hanratty (), an bank fraud agent, begins to track down Frank with little help from his superiors. Carl and Frank meet in a hotel, where Frank convinces Carl his name is Barry Allen of the . Frank leaves, with Carl angrily fooled. Later, at Christmas, Carl is still working when Frank calls him, attempting to apologize for duping Carl. Carl rejects his apology and tells him that he will soon be caught, but laughs when he realizes that Frank actually called him because he has no one else to talk to. Frank hangs up, and Carl continues to investigate, suddenly realizing that the name "Barry Allen" is from The Flash comic books and that Frank is just a teenager.

Frank, meanwhile, has not only changed to becoming a doctor and being a Louisiana lawyer, but has fallen in love with a girl named Brenda () who he eventually admits the truth about himself to and asks her to run away with him. Carl tracks him to his engangment party where Frank has left Brenda, asking her to meet him in two days so they can . Frank sees her waiting as agreed, but suddenly Frank spots FBI agents everywhere and realizes that he has been set up and escapes on a flight to Europe. Six months later, Carl shows his boss that Frank has been forging checks all over the world and that he’s out of control, and he wants permission to go to Europe to look for him. When his boss denies him the permission, Carl brings Frank’s checks to professionals who deem that the check was printed in France. Remembering from an interview with Paula, Frank’s mother, that she was born in , France, Carl goes there where he finds Frank, and tells him that the French police will kill him if he doesn’t go with Carl quietly. Frank assumes he is joking at first, but Carl promises Frank he would never lie to him, and Carl takes him outside, where the French police escort him to prison. Carl promises to have him extradited to the U.S.

The scene then flashes forward to a plane returning Frank to the U.S. from France, where Carl informs him that his father has died. Consumed with grief, Frank escapes when the plane lands in New York and goes back to his old house, where he finds his mother and Jack Barnes, as well as a girl that Frank realizes is his half-sister. Frank gives up and is sentenced to prison, getting visits from time to time from Carl. When Frank easily points out how one of the checks Carl is carrying as evidence is fake, Carl gets an idea and calls for an interview with the FBI. At the interview, the FBI informs Frank that he can live out the remainder of his sentence working in the FBI's bank fraud department, under Carl’s custody, to which Frank accepts. Frank finally reveals to Carl that not all of his careers were cons -- Frank passed the Louisiana Bar exam by studying for it. Epilogue: Frank is happily married with three sons, lives in the Midwest and is still good friends with Carl. Frank has helped catch some of the world's most elusive money forgers and earns millions creating unforgeable checks.

* as Frank Abagnale Jr: Before his 19th birthday, Frank successfully conned millions of dollars worth of checks as a Pan Am pilot, doctor, and .
* as Carl Hanratty: An FBI Agent who pursues Frank Jr. for most of the film. Hanratty is often mocked by other agents, who do not take check fraud seriously. Hanratty is divorced, and his daughter and wife live in . In the end, Carl and Frank Jr. become great friends.
* as Frank Abagnale Sr: Frank's father, and a . Frank Sr. loses his wife Paula and most of his wealth after he committed IRS tax evasion. Frank Sr. dies after falling down a staircase in a train station.
* as Brenda Strong: Before becoming a in Georgia, Brenda had an . Her strict Lutheran parents disowned her, until they met Frank Jr.
* as Roger Strong: Brenda's father, and Carol's husband. Roger is a well-recognized in , and is easily convinced that Frank Jr. graduated from . His is .
* as Paula Abagnale: Frank Sr. met Paula when she was 18-year-old in , France during World War II. Six weeks later the couple married. Paula and Frank Sr. divorced when Frank was 15, leaving Paula to marry Jack Barnes. In the end of the film, Paula and Jack have a young daughter.
* as Jack Barnes: An associate of Frank Sr at the Rotary Club. Barnes later carries an affair with Paula, leading to the divorce of Frank Jr's parents.
* as Carol Strong: Brenda's mother and Roger's wife. When thinking that Frank Jr. is a doctor, lawyer and Lutheran, she is highly ecstatic for her daughter's marriage.

and have small roles. , and Chris Ellis portray FBI agents. cameos as a . The real Frank Abagnale cameos as a French police officer arresting his character.

sold the to his autobiography in 1980.

The original was January 2002,

Despite various changes from real-life events, Abagnale believed Spielberg was the only filmmaker who "could do this film justice".

Abagnale never saw his father when he ran away from home. Spielberg "wanted to continue to have that connection where Frank kept trying to please his father; by making him proud of him; by seeing him in the uniform, the Pan-American uniform."

Carl Hanratty (portrayed by Tom Hanks) is based on FBI agent Joe Shaye. In the the character was referred to as Joe Shaye, but was changed to Carl Hanratty for unknown reasons. [cite news | author = Claude Brodesser | url =http://www.variety.com/article/VR1117851972 | title = D'Works tracking top cop for "Catch" | publisher = Variety | date = | accessdate = 2008-06-30] Abagnale simply escaped from the back of a , not through a toilet. Spielberg "added that for laughs".

"Catch Me if You Can" deals with themes of "broken homes" and "troubled childhoods". Spielberg's parents divorced when he was a teenager, similar to Frank Abagnale's situation. "Some of my films have had to do with broken homes and people on the run from their sad pasts," Spielberg stated. "But there are those strands that got me to say: you know, there's something also about me that I can say through the telling of this kind of lighthearted story." Carl Hanratty also is divorced from his wife, who lives with their daughter in .

observed, "Catch Me if You Can" never takes itself or its subjects too seriously, and contains more genuinely funny material than about 90% of the so-called 'comedies' found in multiplexes these days." In addition Berardinelli praised ' , which he felt was "more intimate and jazzy than his usual material, evoking (intentionally) ". [cite web | url = http://www.reelviews.net/movies/c/catch_me.html | publisher = | title = Catch Me if You Can | accessdate = 2008-07-03] was one of few who gave the film a negative review. Travers considered "Catch Me if You Can" to be "bogged down over 140 minutes. A film that took off like a hare on speed ends like a winded tortoise." He also disliked Hanks' performance. [cite news | author = | url = http://www.rollingstone.com/reviews/movie/5947725/review/5947726/catch_me_if_you_can | publisher = Rolling Stone | title = Catch Me if You Can | date = | accessdate = 2008-07-03]

*"Catch Me If You Can: The Amazing True Story of the Youngest and Most Daring Con Man in the History of Fun and Profit" (ISBN 0060529717) by Jr. and Stan Redding