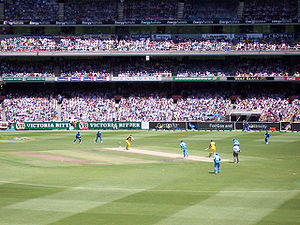 The Melbourne Cricket Ground hosts an ODI match between Australia and India. The two players in yellow are the batsmen and those in blue are the fielding team. 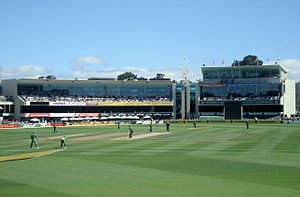 A day match at Bellerive Oval

Limited overs cricket, also known as one-day cricket and in a slightly different context as List A cricket, is a version of the sport of cricket in which a match is generally completed in one day, whereas Test and first-class matches can take up to five days to complete. The name reflects the rule that in the match each team bowls a set maximum number of overs, usually between 20 and 50, although shorter and longer forms of limited overs cricket have been played. Important one-day matches, international and domestic, often have two days set aside, the second day being a "reserve" day to allow more chance of the game being completed if a result is not possible on the first day (for instance if play is prevented or interrupted by rain).

Each team bats only once, and each innings is limited to a set number of overs, usually fifty in a One Day International and between forty and sixty in a List A. List A is a classification of the limited-overs (one-day) form of cricket, technically as the domestic level One-day cricket is popular with spectators as it can encourage aggressive, risky, entertaining batting, often results in cliffhanger endings, and ensures that a spectator can watch an entire match without committing to five days of continuous attendance. In modern one-day tactics, batsmen take few risks outside the first and last few overs, thus diminishing the claimed excitement.

As mentioned above, in almost all competitive one-day games, a restriction is placed on the number of overs that may be bowled by any one bowler. This is to prevent a side playing two top-class bowlers with extremely good stamina who can bowl throughout their opponents' innings. The usual limitation is set so that a side must include at least five players who bowl. For example, the usual limit for twenty-over cricket is four overs per bowler, for forty-over cricket eight per bowler and for fifty-over cricket ten per bowler. There are exceptions: Pro Cricket in the United States restricts bowlers to five overs each, thus leaving a side requiring only four bowlers.

One-day cricket began between English county teams on 2 May 1962. Leicestershire beat Derbyshire and Northamptonshire beat Nottinghamshire over 65 overs in the "Midlands Knock-Out Cup", which Northamptonshire went on to win a week later. The following year, the first full-scale one-day competition between first-class teams was played, the knock-out Gillette Cup, won by Sussex. League one-day cricket also began in England, when the John Player Sunday League was started in 1969. Both these competitions have continued every season since inauguration, though the sponsorship has changed. The knock-out cup is now the Friends Provident Trophy. The league is not exclusive to Sundays, with the competition now over 40 overs. It is now called the Natwest Pro40.

The first Limited Overs International (LOI) or One-Day International (ODI) match was played in Melbourne in 1971, and the quadrennial cricket World Cup began in 1975. Many of the "packaging" innovations, such as coloured clothing, were as a result of World Series Cricket, a "rebel" series set up outside the cricketing establishment by Australian entrepreneur Kerry Packer. For more details, see History of cricket.

Twenty20, a curtailed form of one-day cricket with 20 overs per side, was first played in England in 2003. It has proven very popular, and several Twenty20 matches have been played between national teams. It makes several changes to the usual laws of cricket, including the addition of a "bowl-out" (similar to a penalty shoot-out in football) to decide the result of tied matches, which was subsequently dispensed in favour of a Super Over.

One Day International matches are usually played in brightly coloured clothing often in a "day-night" format where the first innings of the day occurs in the afternoon and the second occurs under stadium lights.

Every four years, the Cricket World Cup involves all the Test-playing nations and other national sides who qualify through the ICC World Cup Qualifier. It usually consists of round-robin stages, followed by semi-finals and a final. The International Cricket Council (ICC) determines the venue far in advance.

The ICC Champions Trophy also involves all the Test-playing nations, and is held between World Cups. It usually consists of a round-robin group stage, semifinals, and a final.

Each Test-playing country often hosts triangular tournaments, between the host nation and two touring sides. There is usually a round-robin group stage, and then the leading two teams play each other in a final, or sometimes a best-of-three final. When there is only one touring side, there is still often a best-of-five or best-of-seven series of limited overs matches.

Domestic one-day competitions exist in almost every country where cricket is played.

Most cricketing nations have some form of domestic List A competition. The number of overs in List A cricket ranges from forty to sixty overs per side.

The Association of Cricket Statisticians and Historians created this category for the purpose of providing an equivalent to first-class cricket, to allow the generation of career records and statistics for comparable one-day matches. Only the more important one-day competitions in each country, plus matches against a touring Test team, are included. The categorization of cricket matches as "List A" was not officially endorsed by the International Cricket Council until 2006, when the ICC announced that it and its member associations would be determining this classification in a manner similar to that done for first class matches.[1] 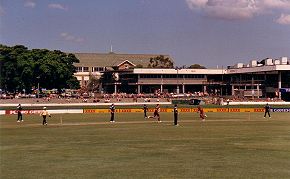 Queensland Bulls versus Victorian Bushrangers in a one-day match at the Brisbane Cricket Ground (The Gabba), Queensland, Australia

The Ryobi One Day Cup. The sides that compete are the following:

In 2006 Cricket Australia introduced the KFC Twenty20 Big Bash which is amongst the state teams (as above) and are divided into Pool A (Western Australia, South Australia and Victoria) and Pool B (Tasmania, Queensland and New South Wales) and a home and away format is played. Each team plays one home and one away game. The winner of each pool plays against each other to determine the champion.

The National One Day Cricket League is sponsored by Ispahani Mirzapore Tea. It currently runs from November to March, with each team playing the other home and away once in a round robin format. These six teams compete for the League title:

The Pakistani domestic competition changes regularly, but for 2005-06 there are plans for three one-day tournaments for men:

The games are 45-overs, and based on a home-and-away round-robin match system (each team plays ten matches) with semi-finals and a final. The Eagles were the winners of the 2004/2005 and 2005/2006 competitions.

20 teams compete in the Premier Limited-Overs Tournament, which is an expansion from 16 in the last season. Games are played over 50 overs per side, and the teams are divided into two groups, where each team meets the other once over a period of a month. The four top teams from each group qualify for the quarter-finals, and there is then a direct knock-out system until a winner is found after three knock-out stages. The competing teams are:

The KFC Cup is the main regional one-day competition in the West Indies, named after its chief sponsor, the fast food chain KFC. In recent years, it has been run over a week's time as a group stage followed by knock-out stages. Guyana are the current holders, after they beat Barbados in the final, and they are also the team to have won it most, with nine titles, although two of them have been shared. Trinidad and Tobago are second in that history, having won seven titles.

In the 2005–06 edition of the KFC Cup, the six permanent first class regions of the West Indies contested the tournament:

The world record for the highest innings total in any List A limited overs match is 496 for 4 by Surrey against Gloucestershire in their Friends Provident Trophy 50-overs match at the Oval, London on April 29th, 2007. That surpassed the 443 for nine by Sri Lanka against the Netherlands in their One Day International 50-overs match at Amstelveen on July 4th, 2006, which is currently the highest ODI score. The lowest ever total is 23 by Yorkshire against Middlesex at Headingley in 1974 in a 40-overs match.

The most runs scored by both sides in any List A limited overs match is 872: Australia, batting first, scored 434 for four in 50 overs, and yet were beaten by South Africa who scored 438 for nine with a ball to spare during their One Day International at Johannesburg in 2006.

The most runs in an over was scored by Herschelle Gibbs of the South African cricket team when, in the 2007 Cricket World Cup in the West Indies, he hit 6 sixes in one over bowled by Daan van Bunge of the Netherlands.[2]

This record is shared by Yuvraj Singh of India who achieved this feat in the 2007 ICC World Twenty20 in South Africa, he hit 6 sixes in an over bowled by Stuart Broad of England.

Sachin Tendulkar holds the record of being the first male cricketer to score a double century in ODIs (200 not out). He achieved this feat against South Africa on February 24, 2010, at Gwalior, India.