The Atari Jaguar is a video game console that was released by Atari Corporation in 1993. It was the last to be marketed under the Atari brand until the release of the Atari Flashback in 2004. It was designed to surpass the Mega Drive/Genesis, Super Nintendo Entertainment System, and the Panasonic 3DO in processing power. Although launched one year earlier, it was eventually in competition with the Sega Saturn, the Sony PlayStation, and other consoles that made up the fifth generation of video game consoles. The console was first released in New York City and San Francisco on November 23, 1993, and the rest of the country in early 1994.[1] Although it was promoted as the first 64-bit gaming system, the Jaguar proved to be a commercial failure and prompted Atari to leave the home video game console market. Despite its commercial failure, the Jaguar has a dedicated fan base that produces homebrew games for it.[5]

The Jaguar was developed by the members of Flare Technology, a company formed by Martin Brennan and John Mathieson. The team had claimed that they could not only make a console superior to the Sega Mega Drive (also called the Sega Genesis) or the SNES, but they could also be cost-effective.[citation needed]

Impressed by their work on the Konix Multisystem, Atari persuaded them to close Flare and form a new company called Flare II, with Atari providing the funding.[citation needed] Flare II initially set to work designing two consoles for Atari Corp. One was a 32-bit architecture (codenamed "Panther"), and the other was a 64-bit system (codenamed "Jaguar"); however, work on the Jaguar design progressed faster than expected, so Atari Corp. canceled the Panther project to focus on the more promising Jaguar.

The Jaguar was introduced in November 1993 at a price of $249.99,[4] under a $500 million manufacturing deal with IBM. The system was initially marketed only in the New York City and the San Francisco Bay areas, under the slogan "Do the Math",[4] claiming superiority over competing 16-bit and 32-bit systems. A nationwide release followed in early 1994.

The Atari Jaguar struggled to attain a substantial user base. In 1993, Atari reported that they had shipped 17,000 units as part of the system's initial test market.[6] By the end of 1994, Atari reported that they had sold approximately 100,000 systems and had reduced the price to improve the competitive nature of the console.[7] By the end of 1995, Sony and Sega had entered the marketplace with competing consoles and Atari's sales declined rapidly. In their 1995 annual report, they noted:

"Jaguar sales were substantially below Atari's expectations, and Atari's business and financial results were materially adversely affected in 1995 as Atari continued to invest heavily in Jaguar game development, entered into arrangements to publish certain licensed titles and reduced the retail price for its Jaguar console unit. Atari attributes the poor performance of Jaguar to a number of factors including (i) extensive delays in development of software for the Jaguar which resulted in reduced orders due to consumer concern as to when titles for the platform would be released and how many titles would ultimately be available, and (ii) the introduction of competing products by Sega and Sony in May 1995 and September 1995, respectively."[8]

Jaguar did earn praise with titles such as Tempest 2000, Doom, and Wolfenstein 3D.[9] The most successful title was Alien vs. Predator.[10] Both it and Tempest 2000 are often considered the system's defining titles.[4] With such a small library of games[11] to challenge the incumbent 16-bit game consoles, Jaguar's appeal never grew beyond a small gaming audience.

In 2006 IGN editor Craig Harris rated the Jaguar controller as the worst ever,[12] criticizing the complexity of the "phone keypad" and the VGA-style connector.

Lack of titles was attributable to two main factors: the Jaguar's questionable long-term prospects among third-party game-publishers and the problematic nature of developing games for the Jaguar. Atari had one opportunity to convince third-party developers, vital for the diversity of Jaguar's game library, with a solid retail-performance, but as things played out, post-holiday sales figures questioned the viability of Atari's business; Atari failed to attract many third-party developers already committed to other game platforms. In addition, the Jaguar's underlying hardware was crippled by a flaw in the CPU's memory controller, which prevented code execution out of system RAM. Less severe, but still annoying defects included a buggy UART. The memory controller flaw could have been mitigated by a mature code-development environment, to unburden the programmer from having to micromanage small chunks of code. Jaguar's development tools left much to the programmer's own implementation, as documentation was incomplete. Writing game-code was often an endurance exercise in the tedious assembler.

In a July 1995 interview with Next Generation Magazine, then-CEO Sam Tramiel declared that the Jaguar was as powerful, if not more powerful, than the Sega Saturn, and slightly weaker than the Sony PlayStation.[13]

By the end of 1995, Atari's revenues declined by more than half, from US$38.7 million in 1994 to $14.6 million in 1995.[3] In late 1995, Atari Corp. ran early-morning infomercial advertisements with enthusiastic salesmen touting the powerful game system. The infomercials ran most of the year, but did not significantly sell the remaining stock of Jaguar systems. In its 10-K405 SEC Filing, filed April 12, 1996, Atari informed their stockholders of the truly dire nature of the Jaguar business:

Atari had already suffered an ill-fated crash in the mid 1980s as a result of the oversaturation of the video game market by third-party developers.

Production of the Jaguar ceased after Atari Corp. merged with JT Storage in a reverse takeover.[14] In a last ditch effort to revive the Jaguar, Atari Corp. tried to play down the other two consoles by proclaiming the Jaguar was the only "64-bit" system. This claim is questioned by some,[15] because the CPU (68000) and GPU executed a 32-bit instruction-set, but sent control signals to the 64-bit graphics co-processors (or "graphics accelerators"). Atari Corp.'s position was that the mere presence of 64-bit ALUs for graphics was sufficient to validate the claim. Design specs for the console allude to the GPU or DSP being capable of acting as a CPU, leaving the Motorola 68000 to read controller inputs. In practice, however, many developers used the Motorola 68000 to drive gameplay logic.

Over the short life of the console, several add-on peripherals were announced. However, only the ProController, the Atari Jaguar CD drive, and the JagLink (a simple two-console networking device) reached retail shelves. A voice modem[16] and VR headset[17] (with infrared head-tracking) existed in prototype form, but were never commercialized (see Loki and Konix Multisystem for early development).

After the Atari Corporation properties were bought out by Hasbro Interactive in the late 1990s, Hasbro released the rights to the Jaguar, declaring the console an open platform and opening the doors for homebrew development.[18] A few developers, including Telegames and Songbird Productions, have not only released previously unfinished materials from the Jaguar's past, but also several brand new titles to satisfy the system's cult following.

In the United Kingdom in 2001, a deal was struck between Telegames and retailer Game to bring the Jaguar to Game's retail outlets. The machine was initially sold for £29.99 brand new and the software was ranged between £9.99 for more common games such as Doom and Ruiner Pinball, and up to £39.99 for more sought-after releases such as Defender 2000 and Checkered Flag. The machine had a presence in the stores until 2007 when remaining consoles were sold off for £9.99 and games were sold for as low as 97p.

This deal was seen as a move to remain competitive with Game's rival at the time, Gamestation who were well known for stocking retro formats.

Imagin Systems, a manufacturer of dental imaging equipment, has since purchased the molding plates for the Jaguar's casing as with minor modification they were found to be the right size for housing their HotRod camera.[19] The game cartridge molds were reused to create an optional memory expansion card.[20]

Atari Games licensed the Atari Jaguar's chipset for use in its arcade games. The system, named COJAG (for "Coin-Op Jaguar"), replaced the 68000 with a 68020 or MIPS R3000-based CPU (depending on the board version), and added a hard drive and more RAM. It ran the lightgun games Area 51 and Maximum Force. Other games (3 On 3 Basketball; Fishin' Frenzy; Freeze; Vicious Circle) were developed but never released. 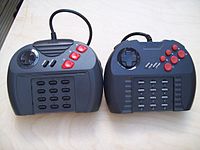 From the Jaguar Software Reference manual:[21]

"Jaguar is a custom chip set primarily intended to be the heart of a very high-performance games/leisure computer. It may also be used as a graphics accelerator in more complex systems, and applied to workstation and business uses. As well as a general purpose CPU, Jaguar contains four processing units. These are the Object Processor, Graphics Processor, Blitter, and Digital Sound Processor. Jaguar provides these blocks with a 64-bit data path to external memory devices, and is capable of a very high data transfer rate into external dynamic RAM." (page 1)

Released in 1995, the Memory Track is a cartridge that contains a 128 K EEPROM, allowing Atari Jaguar CD games to save persistent data such as preferences and savegames.

The Jaguar was a commercial failure due to its shortage of third party support and several poorly received first party titles. In September 2009, IGN ranked the Atari Jaguar as the 24th best console of all time, lower than all five of its major competitors: the SNES (4th best), the Sega Mega Drive (5th), the Sony PlayStation (7th), the Sega Saturn (18th), and the 3DO (22nd).[23]