Gas engine
This article is about engines that use gaseous fuel. For gasoline engines, see Petrol engine. For other uses, see Internal combustion engine.

A gas engine means an engine running on a gas, such as coal gas, producer gas biogas, landfill gas, or natural gas. In the UK, the term is unambiguous. In the US, due to the widespread use of "gas" as an abbreviation for gasoline, such an engine might also be called a gaseous fueled engine, spark ignited engine, or natural gas engine.

Generally the term gas engine refers to a heavy duty, slow revving industrial engine capable of running continuously at full output for periods approaching a high fraction of 8,760 hours per year, for many years, with indefinite lifetime, unlike say a gasoline automobile engine which is lightweight, high revving and typically runs for no more than 4,000 hours in its entire life. Typical power ranges from 10 kW to 4,000 kW.[citation needed] 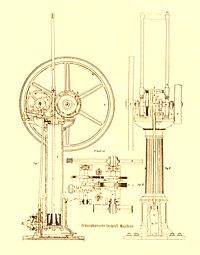 There were many experiments with gas engines in the 19th century but the first practical engine was built by the Belgian engineer Étienne Lenoir in 1860.[1] His work was further researched and improved by a German engineer Nikolaus August Otto, now recognised as the inventor of the first 4-stroke internal-combustion engine to efficiently burn fuel directly in a piston chamber. In August 1864 Otto met Eugen Langen who, being technically trained, glimpsed the potential of Otto's development, and one month after the meeting, founded the first engine factory in the world, NA Otto & Cie. At the 1867 Paris World Exhibition their improved engine was awarded the Grand Prize

The best known builder of gas engines in the UK was Crossley, but there were several other firms based in the Manchester area as well. Tangye Ltd. sold its first gas engine, a 1 nominal horsepower two-cycle type, in 1881, and in 1890 the firm commenced manufacture of the four-cycle gas engine. [2]

The Anson Engine Museum in Poynton, near Manchester, England, has a collection of engines that includes several working gas engines, as well as the first UK-built diesel engine by Mirrlees, Bickerton & Day.

British engines mentioned above were of the slow-speed type—less than 1000 rpm—and used pilot diesel injection for ignition. Modern gas engines are of the high speed type—1500 rpm—and use spark ignition. British manufactures did not invest in developing the technology and were superseded by more forward-thinking suppliers.

Manufacturers of gas engines include Kawasaki Heavy Industries, MTU Friedrichshafen, GE Jenbacher, Caterpillar Inc., Perkins Engines, MWM, Cummins, Wärtsilä, Dresser-Waukesha, Guascor, Deutz, MTU, MAN and Yanmar. Output ranges from about 10 kW micro CHP [combined heat and power] to 18MW.[3] Generally speaking, the modern high-speed gas engine is competitive with gas turbines up to about 5 MW depending on actual circumstances. Caterpillar and many other manufacturers base their products on a diesel engine block and crankshaft. GE Jenbacher are the sole company whose engines are designed and dedicated to gas alone.

Typical applications are baseload or high-hour generation schemes, including combined heat and power, landfill gas, mines gas, well-head gas and biogas (where the waste heat from the engine may be used to warm the digesters) and landfill gas. For typical biogas engine installation parameters see.[4] For parameters of a large gas engine CHP system, as fitted in a factory, see.[5] Gas engines are rarely used for standby applications, which remain largely the province of diesel engines. One exception to this is the small (<150 kW) emergency generator often installed by farms, museums, small businesses, and residences. Connected to either natural gas from the public utility or propane from on-site storage tanks, these generators can be arranged for automatic starting upon power failure.

Use of methane or propane gases

Since natural gas (methane) has long been a clean, economical, and readily available fuel, many industrial engines are either designed or modified to use gas, as distinguished from gasoline. Although the carbon emission footprint does not differ significantly, their operation produces less complex-hydrocarbon pollution, and the engines have fewer internal problems. One example is the liquefied petroleum gas (propane) engine used in vast numbers of forklift trucks. Common usage of "gas" to mean "gasoline" requires the explicit identification of a natural gas engine. (There is also such a thing as "natural gasoline",[citation needed] but this term is very rarely observed outside the refining industry.)

A gas engine differs from a petrol engine in the way the fuel and air are mixed. A petrol engine uses a carburetor or fuel injection but a gas engine often uses a venturi system to introduce gas into the air flow. Early gas engines used a three-valve system, with separate inlet valves for air and gas.

Engine reject heat can be used for building heating or heating a process. In an engine, roughly half the waste heat arises (from the engine jacket, oil cooler and after cooler circuits) as hot water which can be at up to 110oC. The remainder arises as high temperature heat which can generate pressurised hot water or steam by the use of an exhaust gas heat exchanger.

A gas engine can be designed to run on gas, or liquid diesel fuel, or a mixture of the two. There are two different configurations:

This can run on diesel fuel alone, or a mixture of gas and diesel fuel. It cannot run on gas alone because it has no spark ignition system.

This can run on diesel fuel or gas but not a mixture of the two. When running on oil, it uses compression ignition as in a diesel engine. When running on gas it uses spark ignition. The term "Bi-fuel" may be preferable to "Alternative fuel" because the latter term is, nowadays, often used to mean any non-petroleum fuel.

Soil-Net.com: free school-age educational site, featuring much on desertification, teaching about soil and its importance.