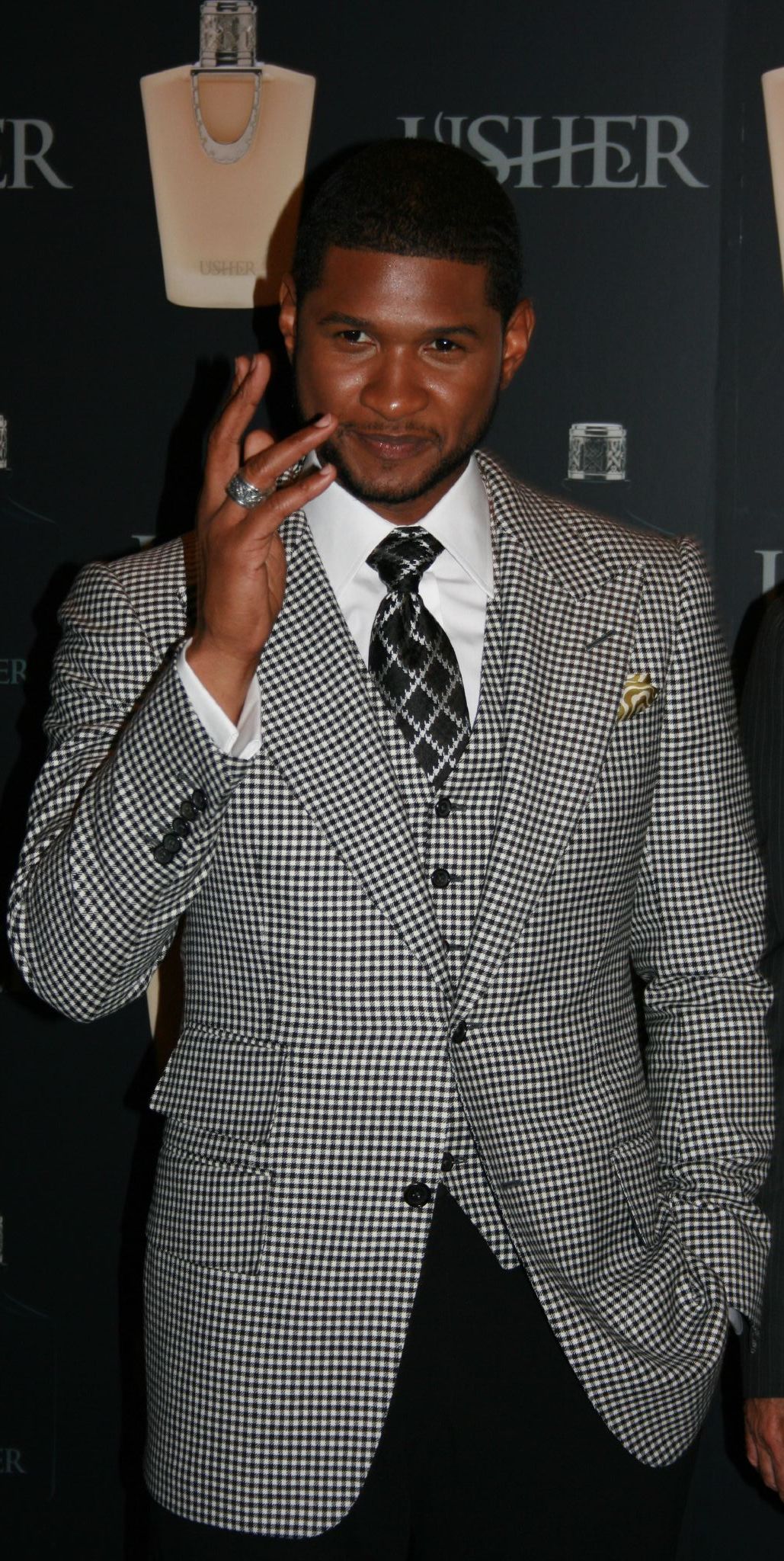 Usher Raymond IV (born October 14, 1978), [cite web|url=http://www.eonline.com/celebrities/profile/index.jsp?uuid=04101470-8d53-4d11-a654-f62ac8d1eb90|title=Usher Raymond - Profile|accessdate=2008-04-26|publisher=] known simply by his first name Usher, is an American R&B and pop - and who rose to fame in the 1990s. To date, he has sold approximately 30 million albums worldwide and has won five s. [ [http://www.grammy.com/GRAMMY_Awards/Winners/Results.aspx GRAMMY Winners Search ] ] Usher is a part owner of the franchise, and has his own record label, US Records. On September 13, 2008 Usher has been inducted into the All time Hot 100 Artist by the . He is one of the few artists of his generation to be mentioned. [See [http://www.billboard.com/bbcom/specials/hot100/charts/top100-artists-21.shtml] ]

At age thirteen, Raymond competed on "", where he was spotted by an representative from , who arranged an audition for him with . A contract with the company soon followed. Usher was introduced on "Call Me A Mack," a song he recorded for the soundtrack album to the , "".

After graduating from high school, Usher continued to hone his skills as a stage performer and laid the groundwork for his second album. He also appeared on "Let's Straighten It Out", a 1995 duet with fellow Atlanta teen recording artist Monica; [Hamilton, Andrew. [http://wc08.allmusic.com/cg/amg.dll?p=amg&sql=10:j9frxqqhld6e "Panther" - Overview] . : 1995] and on "Dreamin'", from "Rhythm of the Games", LaFace's benefit album. [ [http://wc08.allmusic.com/cg/amg.dll?p=amg&sql=10:j9frxqqhld6e allmusic ((( Panther > Overview ))) ] ] He was also featured on the Kazaam soundtrack with "I swear I'm in love"

Usher developed a friendship with , with whom he co-wrote and produced several tracks for his second album, "My Way", released on September 16, 1997. The lead-off single, "" was serviced to radio that summer and hit number one in its second week out—the same week that the album was released. "You Make Me Wanna" stayed on top of the R&B/Hip-Hop track charts for a total of 11 weeks (the longest-charting R&B hit in more than 3 years) and at #2 on the Pop charts for 7 weeks (second only to 's ".") The single remained on the R&B chart for an unprecedented 71 weeks and became Usher's first platinum single. The album's second single, "," was released in November, and in January 1998 peaked at #1 on the Hot 100 Singles Chart for two weeks, as well as #1 on the R&B/Hip-Hop Singles chart for eight weeks. The following summer, the album's eponymous single title track peaked #2 pop/#4 R&B.

In the closing months of 1997, Usher embarked on a series of tour engagements including a spot on Puffy's "No Way Out" tour, dates with , and the opening spot on Janet Jackson's "The Velvet Rope" tour. "My Way" was certified 6x platinum in the United States. Usher received his first nomination as "Best Male R&B Vocal Performance" for "," which was also nominated for a as 'Best Male R&B/Soul Single.'

Usher made his acting debut on the "", which resulted in a recurring role on the series and subsequently his first film role in 1998's "". Usher's extracurricular activities outside of the recording studio gathered momentum over the following year as he was cast in the daytime drama "" and was seen in the family series "Promised Land". He completed two more films, "", and his first starring role in "Light It Up". He also appeared in the Disney TV movie "Geppetto" with . Usher also became involved community activities: he served as national spokesperson for the U.S. Department of Transportation's "Get Big On Safety" campaign, and appeared on NBC's "". He also participated in the NBA's "Stay In School" program, and performed at several of the franchise's jamborees.

Raymond's first concert album, "Live" was released in 1999, which featured appearances by , Jagged Edge, , , and , and was RIAA-certified Gold.

—but underperformed in America. The album was subsequently pushed back and retooled after select tracks were later leaked to the radio and Internet, and garnered a largely cold public response.

In February 2002, Usher won a Grammy for 'Best Male R&B Vocal Performance' for "U Remind Me." The next year, he won the same award for "U Don't Have to Call," making Usher the only artist aside from , more than a decade before, and (in the 1970s) to win this award consecutively.

In summer 2002, Usher contributed vocals to P. Diddy's "I Need a Girl, Part I". The year closed out with a trio of TV series appearances, all in November, on "The Twilight Zone", "7th Heaven", "Moesha" , and "American Dreams" (in which Usher portrayed ).

Usher's fourth studio album, "Confessions", was released on March 23, 2004—just as its first single, "Yeah!" was in its sixth week at number one on the Billboard Hot 100 singles chart and fifth week on top of the Hot R&B/Hip-Hop Singles chart.

The album's second and third singles: "Burn" and "" also topped Billboard's Hot 100 singles charts, the former for eight weeks. Usher became the third lead artist in pop music history (but the first solo artist) to have three singles inside the Hot 100's top 10 since in 1964, and the in 1978. In September 2004, "My Boo," a duet with singer (which was included on a "Special Edition", released a half year after the original version), also peaked at number one and gave him a total of twenty-eight weeks on top of the U.S. charts that year. [cite web|first=Sarah|last=Hall|url=http://www.eonline.com/news/article/index.jsp?uuid=6a185008-b770-476e-843f-520445878097&entry=index|title=Usher, Alicia Got Soul|accessdate=2008-04-26|date=2005-03-01|publisher=E! Online] In December, the album's final single "Caught Up" peaked at number eight on the Hot 100. "Confessions" became the most successful album of the year; certified nine time platinum in America, topping the world charts for several weeks and as of 2008 it sold nearly 19 million copies all over the globe. [www.zombarecords.com] After "Caught Up", Usher released another single "Redlight" which is also shown on the "Special Edition" album.

In spring of 2005, Usher scored a #3 hit as a featured vocalist on Lil' Jon's "Lovers and Friends." In November 2005, Usher starred as a disc jockey named Darrell in the Lions Gate film, "In the Mix".

On August 22, 2006, Usher took over the role of Billy Flynn in the long-running Broadway musical "Chicago". Critical response to his overall performance were mixed. Usher is currently recording his fifth studio album. The album was due for release in November 2007 but was delayed to March 4, 2008. In June, an album was leaked onto the internet, claiming to be the singer's new album; it is however just a bootleg compilation of his previously unreleased material. In 2007, Usher also collaborated with on the track "," for Kelly's album, Double Up. [ [http://www.vh1.com/news/articles/1558656/20070503/kelly_r.jhtml R. Kelly And Usher Get Played By The 'Same Girl'] . Retrieved on May 7, 2007.] He was also featured in a remix version of 's Ice Box. Usher also appeared on the track "" on 's new album "". [ [http://www.djbooth.net/index/tracks/review/mary-j-blige-ft-usher-shake-down/ Mary J. Blige ft. Usher - Shake Down - Listen Now] ]

US has not released any further material since the "In the Mix" soundtrack. One Chance's debut album, originally scheduled for release in late 2006, has been pushed back numerous times.