Mihajlo Idvorski Pupin, Ph.D, LL.D. (4 October 1858[3][4] – 12 March 1935; Serbian Cyrillic: Михајло Идворски Пупин), also known as Michael I. Pupin, was a Serbian physicist and physical chemist. Pupin is best known for his numerous patents, including a means of greatly extending the range of long-distance telephone communication by placing loading coils (of wire) at predetermined intervals along the transmitting wire (known as "pupinization").

Pupin was born in the village of Idvor (part of Kovačica municipality) in Banat, Kingdom of Hungary, Austrian Empire (today in Serbia).

After the sudden death of his father, Pupin emigrated to the United States of America in 1874. Pupin says, "I bless the stars that the immigration laws were different then than they are now ... My admission by a special favor of the examiners was a puzzle and a disappointment to me.[5]" After a short time as a farm laborer in Delaware, he spent the next few years in a series of menial jobs in New York City (most notably, the biscuit factory on Cortlandt Street in Manhattan), learning English and American ways; the library and lectures at Cooper Union were an important resource for him.

He entered Columbia College in 1879, where he became known as an exceptional athlete and scholar. A friend of Pupin's predicted that his physique would make him a splendid oarsman, and that Columbia would do anything for a good oarsman.[5] A popular student, he was elected president of his class in his Junior year. He graduated with honors in 1883 and became an American citizen at the same time. He obtained his Ph.D. at the University of Berlin under Hermann von Helmholtz, and in 1889 he returned to Columbia University to become a lecturer of mathematical physics in the newly formed Department of Electrical Engineering. Pupin's research pioneered carrier wave detection and current analysis.

Pupin's 1899 patent for loading coils, archaically called "Pupin coils", followed closely on the pioneering work of the English physicist and mathematician Oliver Heaviside, which predates Pupin's patent by some seven years. The importance of the patent was made clear when the American rights to it were acquired by American Telephone & Telegraph (AT&T), making him wealthy. Although AT&T bought Pupin's patent, they made little use of it, as they already had their own development in hand led by George Campbell and had up to this point been challenging Pupin with Campbell's own patent. AT&T were afraid they would lose control of an invention which was immensely valuable due to its ability to greatly extend the range of long distance telephones.

Pupin was among the first to replicate Roentgen's production of x-rays in the United States. He in 1896 invented the method of placing a sheet of paper impregnated with fluorescent dyes next to the photographic plate, thereby permitting an exposure of only a few seconds, rather than that of an hour or more. He also carried out one of the first medically-oriented studies of the utility of x-rays in the United States. Shortly afterward, in April 1896, he contracted pneumonia, and nearly died. His wife, who nursed him, also contracted it, and died. He never returned to his studies of x-rays.

In 1901, he became a professor, and, in 1931, a professor emeritus of Columbia University. Professor Pupin was a resident of New York, New York and Norfolk, Connecticut, where he built a Serbian-style manor house on his estate, Hemlock Farm. 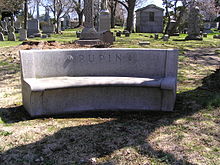 The grave of Michael Pupin in Woodlawn Cemetery

In 1911 Pupin became a consul of Kingdom of Serbia in New York. In his speech to Congress on January 8, 1918, known as the Fourteen Points speech, U.S. president Woodrow Wilson, inspired by his conversations with Pupin, insisted on the restoration of Serbia and Montenegro, as well as autonomy for the peoples of the Austro-Hungarian monarchy.

Michael Pupin's autobiography, "From Immigrant to Inventor", won the Pulitzer Prize in 1924. He also wrote "The New Reformation" (1927) and "Romance of the Machine" (1930), as well as many technical papers. In his many popular writings, Pupin advanced the view that modern science supported and enhanced belief in God. Pupin was active with the Serb émigré societies in the USA, he was the first president and founder of the Serbian National Defense Council of America. In 1918, professor Pupin edited a book on Serbian monuments, under the title "Serbian Orthodox Church".

Among the students of Pupin who made major scientific contributions were: Robert Andrews Millikan, Irving Langmuir, and Edwin Howard Armstrong. Millikan and Langmuir went on to receive Nobel Prize in physics and chemistry respectively.

Research during World War I

When the USA joined World War I in 1917, Pupin was at the University of Columbia, organizing a research group for submarine detection technique.[6] Together with his colleagues profesors Wils and Morcroft, he performed numerous researches with the aim to discover submarines in Key West and New London. He also conducted researches in Kie field of establishing telecommunications between places. During the war Pupin was a member of the state council for research and state advisory board for aeronutics. For his works he receied a laudative from president Warren G. Harding, which was published in his autobiography on the 386th page.[7].

Contributions to determining borders of Yugoslavia

In the year 1912, Serbian Kingdom named Pupin a honorary consul in the USA. He performed his duty until 1920. He contributed a lot to the establishment of international and social relations between Kingdom of Serbia, and later Kingdom of Yugoslavia and USA.

After the world war I, Pupin was already well-known and acclaimed scientist and politically influential figure in America, and he influenced on the final decisions of Paris peace confence when the boarders of the future kingdom (of Serbs, Croats and Slovenians) were drawn. Pupin stayed in Paris for two months during the peace talk (april-may 1919) on the insistence of the government.[8]

My home town is Idvor, but this fact says little because Idvor can’t be found on the map. That is a small village which is found near the main road in Banat, which belonged to Austro-Hungary, and now is an important part of Serbs, Croatians and Slovenians Kingdom. This province on the Paris Peace Conference in 1919, was requested by the Romanians, but their request was invalid. They could not negate the fact that the majority of the inhabitants were Serbs, especially in the Idvor area. President Wilson and Mr. Lancing knew me personally and whey found out that I was originally from Banat, Romanian reasons lost its weight.

In a difficult situation during the negotiations on the boarders of Yugoslavia, Pupin personally wrote a memorandum on March 19, 1919 to the USA president Woodrow Wilson, who based on the data received from Pupin historical and ethnic characteristics of boarder areas of Dalmatia, Slovenia, Istria, Banat, Međimurje, Baranja and Macedonia, stated that he did not recognize the London agreement signed between allies and Italy.

Pupin in 1914. formed “Fund Pijade Aleksic-Pupin” within Serbian Academy of Sciences and Arts [11] to commemorate his mother Olipijada for all the support she gave to him through life. Fund assests were used for helping schools in old Serbia and Macedonia, and scholarships were awarded every year on the Saint Sava day. One street in Ohrid was named after Mihajlo Pupin in 1930 to honour his efforts. He also established a separate “Mihajlo Pupin fund” which he funded from his own property in the Kingdom of Yugoslavia, which he later gave to “Privrednik” for schooling of young people and for prizes in “exceptional achievements in agriculture”, as well as for Idvor for giving prizes to pupils and to help the church district.[12]

Thanks to Pupin’s donations, library in Idvor got a reading room, schooling of young people for agriculture sciences was founded, as well as the electrification and waterplant in Idvor.[13]

In America, in 1909. he established one of the oldest Serbian emigrant organization – Union of Serbs - “Sloga”. The organization had a mission to gather Serbs in imigration and offer help, as well as keeping ethnic and cultural values. This organization later merged with three other imigant societies.[15]

Other emigrant organizations in to one large Serbian national foundation, and Pupin was one of its founders and a long time president (1909-1926)).

He also organized “Kolo srpskih sestara” who gathered help for the Serbian Red Cross, and he also helped gathering of volunteers for the fist world war war fronts in Yugoslavia with the help of Serbian patriotic organization called “Serbian national defence” which he ran, and also founded. Later, during the world war two this organization was rehabilited by Jovan Ducic and worked with the same mission. Pupin guaranted the delivery of food supplies to Serbia with his own resources, and he also was the head of the committee for help to victims of war. He also founded the Serbian society for helping children which provided medicaments, clothes and shelters for war orphans.[16]

Besides his patents he published several dozens of scientific disputes, articles, reviews and the autobiography in 1923. in English From immigrant to inventor for which he received a Pulitzer Prize in 1924.[17][18] It was published in Serbian in 1929 under the title From pastures to scientist (Od pašnjaka do naučenjaka).[19] Beside this he also published: 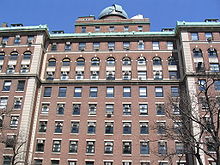 The Physical Laboratories building on the Columbia university, built in 1927 is named Pupin Hall in his honor. It houses the physics and astronomy departments of the university. During Pupins tenure, in the year 1931. Harold C. Urey, in his work with hydrogen isotope deuterium demonstrated the existence of heavy water, the first major scientific breakthrough in the newly founded laboratories. Urey won the Nobel Prize in Chemistry in 1934. for this work.[20]

Pupin released about 70 technical articles and reviews[21] and 34 patents.[22]