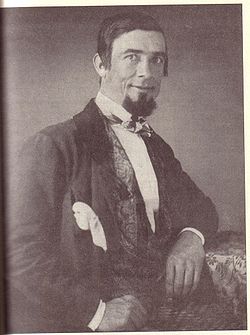 Dan Rice (January 23, 1823 – February 22, 1900), was an American entertainer of many talents, most famously as a clown, who was pre-eminent before the American Civil War. During the height of his career, Rice was a household name. Coining the terms "One Horse Show" and "Greatest Show", he was a leading personality in the new American "pop culture", brought on by the technological changes of the Industrial Revolution and resultant mass culture.[1] Rice became so popular he ran for President of the United States in 1868.[1] With changes in circus venues and popular culture after the Civil War, his legendary talents under the big top have gradually slipped into almost total historical obscurity such that in 2001, biographer David Carlyon called him "the most famous man you've never heard of".[1] 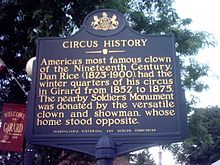 Born Daniel McLaren in New York City, Rice gained 19th century fame with many talents, most of which involved him gallivanting around as a clown figure in circuses. In addition to his 'clowning' talents, he was an animal trainer, song writer, commentator, political humorist, strong man, actor, director, producer, dancer, and politician. He ran for Senate, Congress, and President of the United States — dropping out of each race.[1]

Rice changed the circus into what it is today by mixing animals, acrobats and clowns.[1] His first break came in 1841, when he got a job of presenting a pig named Sybil who could do many tricks, including the ability to tell time.[1] From there he moved on to singing and dancing, and got caught up briefly in the popularity of the 'negro song', singing in blackface.[2] Gaining fame and popularity, he changed styles once again; he starred in various parodies of works by William Shakespeare, including that of "Dan Rice's Version of Othello" and "Dan Rice's Multifarious Account of Shakespeare's Hamlet". He would perform these with various songs and dialects. "Rice was not simply funnier than other clowns; he was different, mingling jokes, solemn thoughts, civic observations, and songs."[1]

Expanding his horizons, he went into producing his own shows, and often had more than one tour going on at the same time. He wanted to move on from his frivolous clowning, and reinvented himself into a gentleman. He started to take up politics and would often have Democratic undertones in his shows.[1] He was then regarded as not only a multi-talented performer, but a smart and noble man who was to be admired. He won the affection of many newspapers and publicists, including those of a then unknown Mark Twain and Walt Whitman.[1] Mark Twain paid him homage in his description of a circus in Adventures of Huckleberry Finn, and it is likely a boyhood Twain actually saw Rice perform when his circus came to Hannibal for a show.[1]

His shows became more famous than any of the other shows touring at the time, including that of rival, Phineas Taylor Barnum.[1] During the 19th century, his name was synonymous with theater. He reinvented the theater into a vaudevillian style before there was vaudeville. He was very patriotic, later influencing the likes of George M. Cohan. He was also one of the main models for "Uncle Sam".[1] 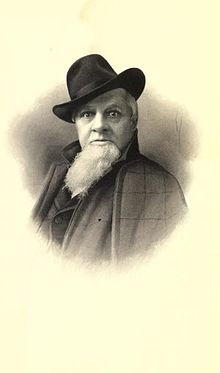 Dan Rice in his later years

A number of popular expressions came into being around Dan Rice.[1]