DeMatha Catholic High School, named after Saint John of Matha, is a four-year Catholic high school for young men located in Hyattsville, Maryland, USA. DeMatha is known for academic achievement, music, arts, service and athletics. DeMatha is a member of the Washington Catholic Athletic Conference, and is under the Roman Catholic Archdiocese of Washington.

DeMatha was founded by the Order of the Most Holy Trinity, or Trinitarians, in 1946. Originally, the school was designed to cater to the needs of Catholic seminarians from the Trinitarian order. Many local families, however, desired a Catholic secondary school for their children, and DeMatha's location in the Maryland suburbs of Washington proved ideal for this goal. Most notably, DeMatha is the only Trinitarian college preparatory school in the United States. As a result, the school began admitting more students, and expanded its academic and athletic programs while constructing the "old wing", or original school structure.

In addition to the original building, the school erected a state-of-the-art second wing, completed in 1990. The former band practice facility, known as "Fort Necessity", burned down in the 1970s. This building was refurbished and became the Anthony Fotos Arts Center, named for a beloved teacher of mechanical drawing and other architectural and engineering courses and a 30-year veteran of the school.

In 2001, the school purchased two acres adjacent to the original campus along Route 1, or Baltimore Avenue, in downtown Hyattsville. The additional property is now a Gateway on Route 1 and three parking lots. In 2009, the McCarthy Activity Center became the home of DeMatha's Music Department, and in early 2010, a new Convocation Center opened on Madison Street. This building includes a new gym, which replaced the Morgan Wooten Gymnasium, as well as a weight/fitness room, several classrooms, alumni lounge, and other amenities.

While DeMatha continues its tradition of all-male secondary education, when Regina Catholic High School, an all-girls school in Adelphi, Maryland, closed in 1989, DeMatha welcomed 21 members of the junior class who expressed a desire to finish their last high school year at DeMatha. Therefore, the class of 1990 contains the only female graduates in school history.

The school offers a variety of honors and Advanced Placement courses, as well as various academic clubs and societies. Also offered are opportunities for study abroad and service within local Maryland communities, in keeping with Trinitarian tradition. The school emphasizes the importance of being both "a gentleman and a scholar".

The U.S. Department of Education recognized the school as a National School of Excellence twice, in 1984 and 1991. In DeMatha's 63-year history, the school has graduated over 8,000 young men. The school supports the Valois chapter of the National Honor Society, with a large percentage of upperclassmen participating in the group. The DeMatha chapter assists with food drives, fundraisers, and cleaning efforts of local parks, including the Anacostia River in Washington, D.C.

DeMatha routinely fields a strong Mock Trial team. Consisting of academically talented students, and coached by faculty and alumni mentors, the team has enjoyed great success and exposure over the years, being featured in publications such as the "Catholic Standard" and arguing before the Maryland Court of Appeals. The team regularly makes a showing in Maryland state semifinals, winning the statewide Maryland championship in 2001.

DeMatha's music program was founded in 1970. The school's Wind Ensemble was named the top Catholic High School Band in 18 of 20 years by the National Catholic Bandmaster's Association. In addition, DeMatha performing groups have received 50 gold medals at international festivals in Chicago, Toronto, Orlando, Atlanta, Nashville, Myrtle Beach, Virginia Beach, and Daytona Beach. Each year, the Wind Ensemble, Symphonic Band, Concert Band, Concert Band II, the Voices of DeMatha, DeMatha Harmonics and the DeMatha Singers perform at a major music festival. The bands and choruses have received consistent superior ratings for the past 25 years at District, Archdiocesan, and State Band festivals. In 2007, the DeMatha Choruses won Grand Champion in the 2007 Atlanta Festi-val. In 2008, the Wind Ensemble and Symphonic Band combined to give DeMatha the Instrumental Grand Championship and the Voices of DeMatha and DeMatha Harmonics earned the Choral Grand Championship in competition. Over 500 students have been chosen to perform in All-State bands since 1974. 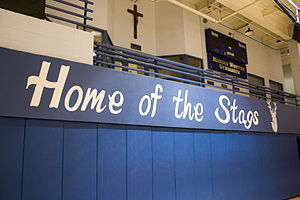 DeMatha's athletic teams, the Stags, have received national recognition for achievement in a variety of sports, from golf and baseball to basketball and football. The Stags first gained national recognition in 1962 with their initial national championship in basketball with a team led by John Austin, Johnny Jones, Gary Ward, John Carroll and "Big" Bill McDermott, coached by Morgan Wootten. In 1965, the DeMatha basketball team defeated Power Memorial High School of New York, with then Lew Alcindor (Kareem Abdul-Jabbar), for its second national championship in a game called "The Greatest High School Basketball Game Ever".

DeMatha's basketball program has produced many championships in the school's Washington Catholic Athletic Conference league, and the team often wins the City Title game against opposing schools from the District of Columbia. In addition, DeMatha's former head basketball coach, Morgan Wootten, earned a spot in the Basketball Hall of Fame for his achievements as the Stags' coach. In 2005, DeMatha's Varsity Basketball team finished with the #1 ranking in the Washington Post, and finished as the third-best high school squad in the country, according to USA Today.

The DeMatha varsity football team won the 2008 WCAC championship for the sixth consecutive year and finished ranked #1 in the DC area by the Washington Post. In 2004, Bill McGregor was named "High School Coach of the Year" by the NFL. He was nominated by his former player, Brian Westbrook, then playing for the Philadelphia Eagles.

In addition to football and basketball success, the DeMatha soccer and wrestling programs have also enjoyed critical acclaim. The varsity soccer team has won six WCAC championships and had a 67-game undefeated streak from 2004 through 2007. DeMatha's 2010 soccer team was WCAC champs, went undefeated (24-0-0) and were ranked number 3 in the nation by the National Soccer Coaches Association of America, and ranked number 4 in the nation by ESPN. The 2010 team also scored 110 goals while allowing only 10 goals in all games. The DeMatha wrestling team is known as a national powerhouse, with 23 consecutive WCAC championships. DeMatha has produced several All-American wrestlers.

DeMatha also fields very competitive teams, each with a number of conference titles, in other sports, such as swimming, tennis, hockey, golf, lacrosse, cross country, rowing (crew), rugby, and track. The lacrosse team have won several championships in an area known for an abundance of talent in the sport, particularly at schools such as the University of Maryland and Johns Hopkins University, both of which have recruited DeMatha lacrosse players in the past.