Flags of Our Fathers (film)

Flags of Our Fathers (film) 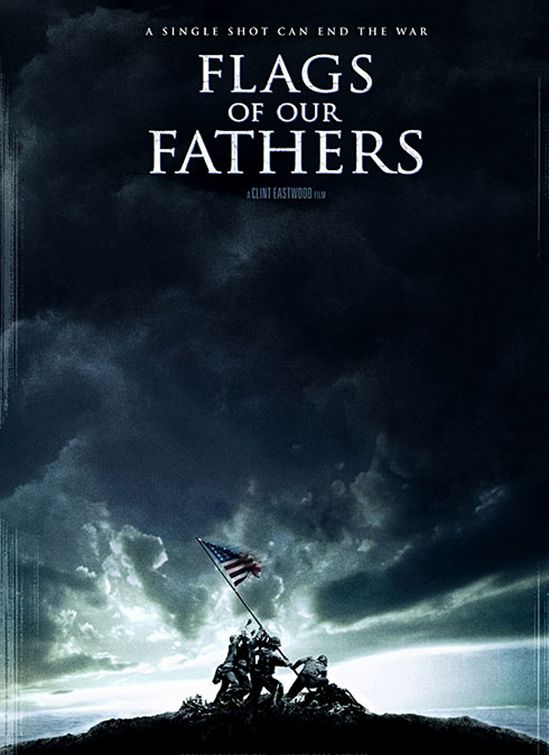 "Flags of Our Fathers" is a 2006 American directed by and written by and . It is based on the book of the same name (see "") written by James Bradley and Ron Powers about the and the six men who were involved in . Eastwood also directed a complementary film on the battle from the ese viewpoint entitled "". It was released in Japan on , and in the United States on , , two months after the release of "Flags of Our Fathers" on , .

"Flags of Our Fathers" depicts how the three surviving flag-raisers at the were used as propaganda tools by the government to lift the morale of the American people, and raise money for the war effort. It also shows the effects of war on the veterans, and how they suffered from memories of the war for the rest of their lives.

Instead of a linear storyline like the book, the film is shown through a series of flashbacks. , the of the film, has stated that it could not be told as a straightforward movie because the book was "too big and too good".Fact|date=February 2007 "The ambitious script...jumps back and forth in time in ways that could have been a jumble if Eastwood wasn't so adept at cutting a path to what counts. Eastwood's film [is] a fierce attack on wartime hypocrisy and profiteering, is also an indelibly moving salute to the soldiers who don’t deserve to walk alone for following their own sense of duty. [ [http://www.rollingstone.com/reviews/movie/12045984/review/12045987/flags_of_our_fathers Flags of Our Fathers : Review : Rolling Stone ] ]

The film received positive reviews with the review tallying website reporting that 125 out of the 170 reviews they tallied were positive for a score of 74% and a certification of "fresh." [rottentomatoes.com, [http://www.rottentomatoes.com/m/flags_of_our_fathers/ Flags of Our Fathers entry] , accessed January 21, 2007.]

The film made the top ten list of the . Eastwood also earned a nomination for Directing. The film was nominated for two - for Best Sound and Sound Editing. Film critic Richard Roeper said "Clint Eastwood's "Flags of Our Fathers" stands with the Oscar-winning "Unforgiven" and "Million Dollar Baby" as an American masterpiece. It is a searing and powerful work from a seventy-six-year-old artist who remains at the top of his game." and "Flags of Our Fathers" is a patriotic film in that it honors those who fought in the Pacific, but it is also patriotic because it questions the official version of the truth, and reminds us that superheroes exist only in comic books and cartoon movies." [ [http://www.suntimes.com/entertainment/movies/104399,WKP-News-flags20.article Grand old 'Flags' :: CHICAGO SUN-TIMES :: Movies ] ]

Despite critical acclaim, the movie underperformed at the box office, earning just $65,898,991 worldwide on an estimated $55,000,000 production budget.

The movie has been criticized for omitting black Marines and drawn the ire of a small number of veterans groups. [ [http://film.guardian.co.uk/News_Story/Guardian/0,,1928009,00.html Where have all the black soldiers gone?] , ] At the 2008 , director , who is making "", about an all-black U.S. division fighting in Italy during , criticized director for not depicting black Marines in "Flags of Our Fathers". Citing historical accuracy, Eastwood responded that his film was specifically about the soldiers who raised the flag on at , pointing out that while black soldiers did fight at Iwo Jima, the U.S. military was segregated during WWII, and none of the men who raised the flag were black. Eastwood angrily said that Lee should "shut his face". Lee responded that Eastwood was acting like an "angry old man", and argued that despite making two Iwo Jima films back to back, "" and "Flags of Our Fathers", "there was not one black soldier in both of those films". [ [http://abcnews.go.com/Entertainment/story?id=5015524&page=1 Marikar, Sheila; "Spike Strikes Back: Clint's 'an Angry Old Man'"; abcnews; , ] ] [ [http://news.bbc.co.uk/2/hi/entertainment/7439371.stm BBC News: Eastwood hits back at Lee claims] ]

The was released in the US by Paramount Home Entertainment on , . It is devoid of any special features.

A Two-Disc Special Collector's Edition DVD (with special features) was released on , . It was also released on and formats.