Concentration (game)
This article is about the card game. For French city, see Paris. 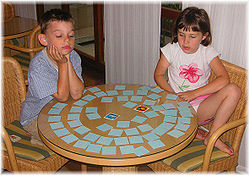 Variously themed cards are available for players of all age groups.

Concentration, also known as Memory, Pelmanism, Shinkei-suijaku, Pexeso or simply Pairs, is a card game in which all of the cards are laid face down on a surface and two cards are flipped face up over each turn. The object of the game is to turn over pairs of matching cards. Concentration can be played with any number of players or as solitaire and is an especially good game for young children, though adults may find it challenging and stimulating as well. The scheme is often used in quiz shows and can be employed as an educational game.

Any deck of playing cards may be used, although there are special cards available, as shown in the picture above. The rules given here are for a standard deck of 52 cards, which are normally laid face down in 4 rows of 13 cards each. The two jokers may be included for a tableau of 6 rows of 9 cards each.

In turn each player chooses two cards and turns them face up. If they are of the same rank and color (e.g. 6 of hearts and 6 of diamonds, queen of clubs and queen of spades, or both jokers, if used) then that player wins the pair and plays again. If they are not of the same rank and color, they are turned face down again and play passes to the player on the left. The game ends when the last pair has been picked up. The winner is the person with the most pairs, and there may be a tie for first place.

Concentration may be played solo either as a leisurely exercise, or with the following scoring method: play as normal, but keep track of the number of non-matching pairs turned over (this may be done using poker chips, pennies or by making marks on a sheet of paper). The object is to clear the tableau in the fewest number of turns, or to get the lowest possible score.

Over the course of the game, it becomes known where certain cards are located, and so upon turning up one card players with good memory will be able to remember where they have already seen its pair.

It is common for many players to think they know where pairs are and to turn over the one they are sure of first, then be stumped finding its mate. A better strategy is to turn over a less certain card first, so that if wrong, one knows not to bother turning a more certain card over.

An ideal strategy can be developed if we assume that players have perfect memory. For the One Flip variation below, this strategy is fairly simple. Before any turn in the game, there are t cards still in play, and n cards still in play but of known value. The current player should flip over an unknown card. If this card matches one of the known cards, the match is next chosen. Less obviously, if the card does not match any known card, one of the n known cards should still be chosen to minimize the information provided to other players. The mathematics follow:

There are some exceptions to this rule that apply on the fringe cases, where n = 0 or 1 or towards the end of the game.

Many of these may be played in combination with one another:

Concentration is not limited to playing cards. Many versions of the game that are designed for children may have different themes. In some computer versions, the cards may randomly move to increase the difficulty.