Mount Jukes is a mountain in the West Coast Range on the West Coast of Tasmania, Australia. It was named by Charles Gould in 1862 after Professor Joseph Beete Jukes, English geologist, who was involved in issues relating to Charles Darwin. Jukes had visited Hobart in 1842-3 on HMS Fly.

With multiple peaks, and glacial lakes on its upper eastern reaches, Mount Jukes was the mountain above the town of Crotty and is west of what is now Lake Burbury.

It has had mines and small mining camps adjacent to the lakes, and on the northern upper slopes, near where the Mount Jukes road traverses the upper slopes of the King River Gorge.

Mount Jukes Road (22 km length) [1] was constructed by the Hydro in the 1980s at the time the Crotty Dam was made. It connects southern Queenstown with Darwin Dam, where the previously utilised North Mount Lyell Railway formation between the Linda Valley and Crotty was submerged by Lake Burbury. 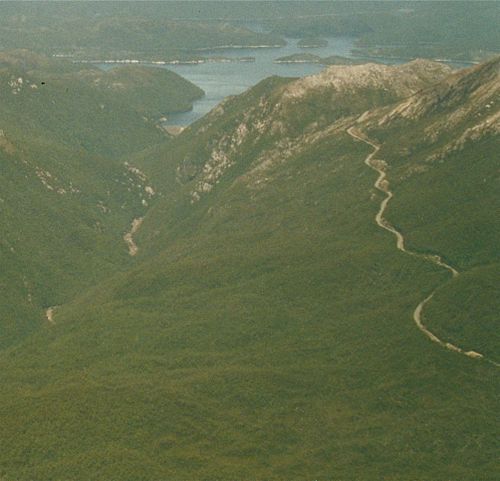 Aerial photograph of lower slopes of Mount Huxley (to the left), King River gorge in the left lower, Crotty Dam and Lake Burbury (to the rear), northern slopes (that is Proprietary Peak) of Mount Jukes on the right, Mount Jukes Road in right foreground, and to the right rear the different coloured upper part of East Jukes Peak

Mount Jukes has a number of named features[2]:-

Other named features that are not given specific heights include:-

Two named glacial lakes in the upper part of the eastern side of the mountain are:-

It is by the lakes that a number of small mines were started in the early years of the twentieth century.