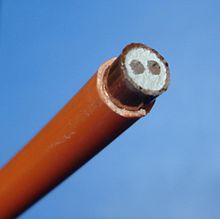 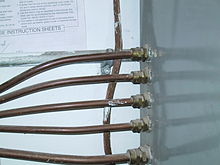 Mineral insulated cables at a panel board

Mineral-insulated copper-clad cable is a variety of electrical cable made from copper conductors inside a copper sheath, insulated by inorganic magnesium oxide powder. The name is often abbreviated to MICC or MI cable, and colloquially known as pyro (because the original manufacturer and vendor for this product in the UK is a company called Pyrotenax). A similar product sheathed with metals other than copper is called mineral insulated metal sheathed (MIMS) cable.

MI cable is made by placing copper rods inside a circular copper tube and filling the intervening spaces with dry magnesium oxide powder. The overall assembly is then pressed between rollers to reduce its diameter (and increase its length). Up to seven conductors are often found in an MI cable, with up to 19 available from some manufacturers.

Since MI cables use no organic material as insulation (except at the ends), they are more resistant to fires than plastic-insulated cables. MI cables are used in critical fire protection applications such as alarm circuits, fire pumps, and smoke control systems. In process industries handling flammable fluids MI cable is used where small fires would otherwise cause damage to control or power cables. MI cable is also highly resistant to ionizing radiation and so finds applications in instrumentation for nuclear reactors and nuclear physics apparatus.

MI cables may be covered with a plastic sheath, coloured for identification purposes. The plastic sheath also provides additional corrosion protection for the copper sheath.

The first patent for MI cable was issued to the Swiss inventor Arnold Francois Borel in 1896. Initially the insulating mineral was described in the patent application as pulverized glass, silicious stones, or asbestos, in powdered form. Much development ensued by the French company Société Alsacienne de Construction Mécanique. [1] Commercial production began in 1932 and much mineral-insulated cable was used on ships such as the Normandie and oil tankers, and in such critical applications as the Louvre museum. In 1937 a British company Pyrotenax, having purchased patent rights to the product from the French company, began production. During the Second World War much of the company's product was used in military equipment.

The Pyrotenax company introduced an aluminum sheathed version of its product in 1964. MI cable is now manufactured in several countries. Pyrotenax is now a wholly owned subsidiary of Tyco Corporation.

MI cables are used for power and control circuits of critical equipment, such as the following examples:

MI cable fulfills the passive fire protection called circuit integrity, which is intended to provide operability of critical electrical circuits during a fire. It is subject to strict listing and approval use and compliance

A similar appearing product is mineral-insulated trace heating cable, in which the conductors are made of a high-resistance alloy. A heating cable is used to protect pipes from freezing, or to maintain temperature of process piping and vessels. An MI resistance heating cable may not be repairable if damaged. Most electric stove and oven heating elements are constructed in a similar manner.

The metal sheath and solid filling of MI cable makes it mechanically robust and resistant to impact; an MI cable may be struck repeatedly with a hammer and still provide adequate insulation resistance for a circuit [2]. Copper sheathing is waterproof and resistant to ultraviolet light and many corrosive elements. MI cable is approved by electrical codes for use in areas with hazardous concentrations of flammable gas in air; an MI cable will not allow propagation of an explosion inside the copper tube, and the cable is unlikely to initiate an explosion even during circuit fault conditions. Metal sheathing will not contribute fuel or hazardous combustion products to a fire, and cannot propagate a fire along a cable tray or within a building. The cable is inherently fire-rated without additional coatings, and will survive designated fire tests representative of actual fire conditions longer than the enclosing structure.

When used within a tennanted area, carrying electricity supplied and billed to the landlord, for example for a communal extract system or antenna booster, it provides a supply cable that cannot easily be 'tapped' into to obtain free energy.

Although made from solid copper elements, the finished cable assembly is still pliable due to the malleability of copper. The cable can be bent to follow shapes of buildings or bent around obstacles, allowing for a neat appearance when exposed.

Since the inorganic insulation does not degrade with (moderate) heating, the finished cable assembly can be allowed to rise to higher temperatures than plastic-insulated cables; the limits to temperature rise may be only due to possible contact of the sheath with people or structures. This may also allow a smaller cross-section cable to be used in particular applications.

Due to oxidation, the copper cladding darkens with age and MICC is therefore often used in historic buildings such as castles where it blends in with stonework.

Circuit integrity for conventional plastic-insulated cables requires additional measures to obtain a fire-resistance rating or to lower the flammability and smoke contributions to a minimum degree acceptable for certain types of construction. Sprayed-on coatings or flexible wraps cover the plastic insulation to protect it from flame and reduce its flame spreading ability. However, since these coatings reduce the heat dissipation of the cables, often they must be rated for less current after application of fire-resistant coatings. This is called ampacity derating. It can be tested through the use of IEEE 848 Standard Procedure for the Determination of the Ampacity Derating of Fire-Protected Cables. The following materials have been used on their own and/or in combination with one another for fireproofing electrical circuits:

So far as building code and fire code compliance are concerned, what matters is Listing and approval use and compliance in order to be able to demonstrate empirically, that the field-installed configuration is capable of achieving a fire-resistance rating. Whether one uses MI Cable or ordinary cables that have been externally fireproofed is a matter of choice, which is largely dictated by economics.