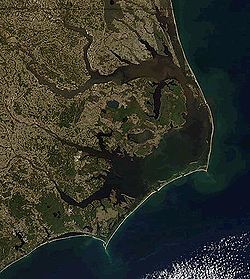 The Outer Banks (also known as OBX) is a 200-mile (320-km) long string of narrow barrier islands off the coast of North Carolina, beginning in the southeastern corner of Virginia Beach on the east coast of the United States. They cover approximately half the northern North Carolina coastline, separating the Currituck Sound, Albemarle Sound, and Pamlico Sound from the Atlantic Ocean.

The Outer Banks is a major tourist destination and is known for its temperate climate and wide expanse of open beachfront. The Cape Hatteras National Seashore has four campgrounds where visitors may camp.[1]

The Wright brothers' first flight in a powered, heavier-than-air vehicle took place on the Outer Banks on December 17, 1903, at Kill Devil Hills near the seafront town of Kitty Hawk. The Wright Brothers National Monument commemorates the historic flights, and First Flight Airport is a small, general-aviation airfield located there.

The English Roanoke Colony—where the first person of English descent, Virginia Dare, was born on American soil[2]—vanished from Roanoke Island in 1587. The Lost Colony, written and performed to commemorate the original colonists, is the longest running outdoor drama in the United States and its theater acts as a cultural focal point for much of the Outer Banks. 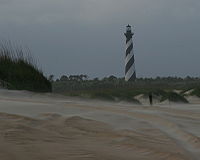 The Outer Banks is a series of islands: from north to south — Bodie Island, Roanoke Island, Hatteras Island, and Ocracoke Island. The Outer Banks is considered to be the areas of coastal Currituck County, Dare County, and Hyde County. Some consider the Outer Banks to stretch as far south as Cape Lookout including portions of Carteret County and as far north as Sandbridge in Virginia Beach. Areas south of Cape Lookout in Carteret County are considered the Crystal Coast, which for tourism purposes has been coined the "Southern Outer Banks". The northern part of the Outer Banks, from Oregon Inlet northward, is actually a part of the North American mainland, since the northern inlets of Bodie Island and Currituck Banks no longer exist.[3] It is separated by the Currituck Sound and the Intracoastal Waterway, which passes through the Great Dismal Swamp occupying much of the mainland west of the Outer Banks. Road access to the northern Outer Banks is cut off between Sandbridge and Corolla, North Carolina, with communities such as Carova Beach accessible only by four-wheel drive vehicles. North Carolina State Highway 12 links most of the popular Outer Banks communities. The easternmost point is Cape Point at Cape Hatteras on Hatteras Island, site of the Cape Hatteras Lighthouse.

The Outer Banks is not anchored to offshore coral reefs like some other barrier islands and as a consequence often suffers significant beach erosion during major storms. In fact, its location jutting out into the Atlantic makes it the most hurricane-prone area north of Florida, for both landfalling storms and brushing storms offshore. Hatteras Island was cut in half on September 18, 2003, when Hurricane Isabel washed a 2,000 foot (600 m) wide and 15 foot (5 m) deep channel called Isabel Inlet through the community of Hatteras Village on the southern end of the island.[4] The tear was subsequently repaired and restored by sand dredging by the Army Corps of Engineers. It was cut off once again in 2011 by Hurricane Irene. Access to the island was largely limited to boat access only from August to late October until another temporary bridge could be built.

The vegetation of the Outer Banks is varied. In the northeast part of the Outer Banks from Virginia Beach southward past the North Carolina border to Oregon Inlet, the main type of vegetation are sea grasses, beach grasses and other beach plants including Opuntia humifusa on the Atlantic side and Wax Myrtles, bays, and grasses on the Sound side with areas of pine and Spanish Moss-covered Live Oaks. Yucca aloifolia can be found growing wild here in the northern parts of its range on the beach. Cabbage palmetto was once indigenous to the entire Outer Banks. Although its modern day natural northern range is only in the very southern Outer Banks, it is still successfully planted and grown anywhere on the Outer Banks.

From Cape Hatteras National Seashore southward, the vegetation includes that of the northeastern Outer Banks. Cabbage palmetto, Sabal minor on the beach, and Yucca aloifolia which can be found in the north, although they are native and more commonly found in the southern part of the Outer Banks. Pindo palms and Windmill Palms are also planted widely throughout the Outer Banks although they are not indigenous to the area.

A wide variety of native plants can be found at the Elizabethan Gardens in Manteo on Roanoke Island.[5] The gardens are open year round, 7 days a week.

The Outer Banks has unusual weather patterns due to its unique geographical location. As the islands are jutted out from the eastern seaboard into the Atlantic Gulf stream, the Outer Banks has a predisposition to be affected by hurricanes, Nor'easters (usually in the form of rain, and rarely snow or mixed precipitation), and other ocean driven storms.

The Winter is typically milder than inland areas, averaging lows in the upper 30's and highs in the lower 50's, and is more frequently overcast than in the summer. However, the exposure of the Outer Banks makes it prone to higher winds, often causing wind chills to make the apparent temperature as cold as the inland areas. The Summer months average lows from the mid 70's to highs near 90, depending on the time of the summer. Spring and Fall are typically milder seasons. Fall and Winter are usually warmer than areas inland, while Spring and Summer are often slightly cooler due to the moderating affects of being surrounded by water.

Although snow is possible, averaging from 3 inches in the north to less than 1/2 inch per year in the south, there are many times when years pass between snowfalls. On very rare occasions, a nor'easter will pass far enough out to sea that the colder temperatures will be pulled further to the east, facilitating potentially significant amounts of snow. The majority of nor'easters are "born" off the coasts of the Outer Banks. 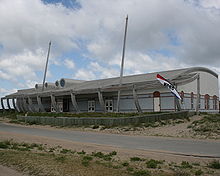 The Outer Banks were first settled by English settlers, many of whom still have descendants living on the islands to this day. Before bridges were built in the 1930s, the only form of transport between or off the islands was by boat, which allowed for the islands to stay isolated from much of the rest of the mainland. This helped to preserve the maritime culture and the distinctive Outer Banks brogue, which sounds more like an English accent than it does an American accent. Many "bankers" have often been mistaken for being from England or Ireland when traveling to areas outside of the Outer Banks. The brogue is most distinctive the further south one travels on the Outer Banks, with it being the thickest on Ocracoke Island and Harkers Island. Locally, the accent is called "Hoi Toider", in that the term "High tider" is pronounced with a distinctive "oy" in the hard "i".

The islands are home to herds of feral horses, sometimes called "banker ponies," which according to local legend are descended from Spanish Mustangs washed ashore centuries ago in shipwrecks. Colonies exist near Corolla and on Ocracoke Island.

Ocracoke was the home base of pirate Edward Teach, better known as Blackbeard. It is also where the famed pirate was killed.

The Outer Banks is home to "Yaupon Holly" (Ilex vomitoria), the roasted leaves of which were brewed into a high caffeine beverage called black drink by the Native Americans. The Outer Banks may be one of the few places where it is still consumed.

Towns and communities along the Outer Banks include (listed from north to south): 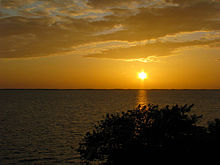 Sunset over the Currituck Sound in Duck (2009) 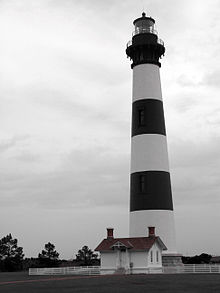 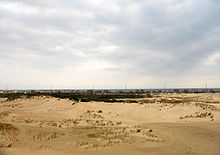 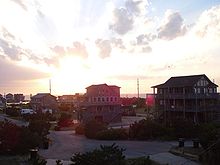