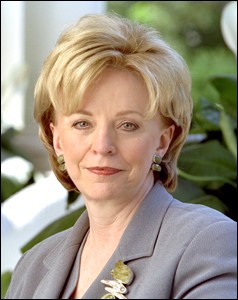 Lynne Ann Vincent Cheney (born , ) is the current , the wife of United States Vice President . She is a ist, conservative scholar, and former talk-show host.

Cheney obtained a degree with highest honors from , where she was a member of . She furthered her education with a master of arts from the University of Colorado at Boulder, and a Ph.D. in 19th century from the (her dissertation was entitled "'s Possible Perfection: A Study of the ian Strain in Arnold's Poetry").

Lynne Cheney served as chairwoman of the from 1986 to 1993. In 1995 she founded , a conservative group that monitors American s and .

She is a senior fellow in education and culture at the American Enterprise Institute for Public Policy Research. She also serves as a of Reader's Digest Association, Inc. From 1995 to 1998, Cheney served as a co-host of the Sunday edition of 's "Crossfire", replacing .Fact|date=September 2008

Lynne Cheney served on 's board of directors from 1994 to 2001, a $120,000-a-year post she gave up shortly before her husband's inauguration; Cheney served on the board's Finance, and Nominating and Corporate Governance committees. [ [http://www.corpwatch.org/article.php?id=5968 USA: Inside Lockheed's $250 Billion Pentagon Connection] by Geoffrey Gray, "", March 19th, 2003] [ [http://www.bizjournals.com/washington/stories/2001/01/01/daily19.html Vice president-elect's wife steps down from Lockheed board] , "" - January 5, 2001] In 2000 she was mentioned as a possible conservative female pick for Republican Vice Presidential nominee on the ticket.Fact|date=September 2008 The appointed head of the nominating committee was her husband, Dick Cheney, then the CEO of , who eventually emerged as Bush's choice.Fact|date=September 2008

She repeatedly spoke out against violent and sexually explicit lyrics in popular music, picking up on an issue originally made famous by former Vice President and his wife Tipper. She also criticized makers for similar content. [ [http://archives.cnn.com/2000/ALLPOLITICS/stories/09/18/lynne.cheney/index.html Lynne Cheney blasts Gore comments on media violence - CNN.com] ]

On an , episode of "", Lynne Cheney stated that she opposed a banning .

Cheney has a brother, Mark Vincent, who lives in Wyoming with his wife Linda. She has been married to Richard "Dick" Cheney since 1964. They have two daughters and six grandchildren. Their daughters are and . Elizabeth, also known as Liz, was born , , and is married to , the general counsel for the . They have five children. She graduated from the Law School in 1996 and has worked as an , , and now for the 's Near East Affairs Bureau. Mary Cheney was born , . Openly , she lives with her partner, Heather Roan Poe (born , ), in , . Mary Cheney gave birth to her first child, Samuel David Cheney, in May 2007. She is one of her father's top campaign aides and closest confidantes, and Lynne and Dick Cheney have expressed support for their daughter, while condemning other gay and lesbian people. In July 2003, she became the director of vice presidential operations for the Bush-Cheney 2004 presidential reelection campaign; she was a vital part of the campaign. Until May 2000, she was the lesbian/gay corporate relations manager for the . She wrote a book about her work with her father in 2006.

Cheney had been considered to be a possible contender to fulfill the late U.S. Senator ' term in the U.S. Senate. [ [http://www.politico.com/blogs/thecrypt/0607/Lynne_Cheney_Susan_Thomas_floated_as_possible_replacements_for_late_Sen_Craig_Thomas.html The Crypt's Blog - Politico.com ] ] A Cheney spokesperson stated she was considering the post. Cheney chose not to seek the seat when she did not sign an application to become a candidate for the position. If she had won the seat, she would have become the first "Second Lady" to be in public office or the Senate since Senator .