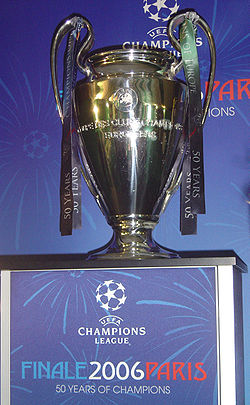 The European Champion Clubs' Cup which the winner receives

The UEFA Champions League is a seasonal association football competition established in 1955.[1] The UEFA Champions League is open to the league champions of all UEFA (Union of European Football Associations) member associations (except Liechtenstein, which has no league competition), as well as to the clubs finishing from second to fourth position in the strongest leagues.[2] Prior to the 1992–93 season, the tournament was named the European Cup.[1] Originally, only the champions of their respective national league and the defending champion of the competition were allowed to participate. However, this was changed in 1997 to allow the runners-up of the stronger leagues to compete as well.[3] The defending champion of the competition did not automatically qualify until the rules were changed in 2005 to allow title holders, Liverpool, to enter the competition.[4] Real Madrid won the inaugural competition, beating Stade de Reims in the 1956 final.

If a team wins the UEFA Champions League three times in a row, or five times overall, they are allowed to keep the European Champion Clubs' Cup and a new one is commissioned.[5] As of 2011, five teams have earned this privilege; Real Madrid, Ajax, Bayern Munich, Milan and Liverpool.[6]

Real Madrid hold the record for the most victories, winning the competition nine times since its inception. They have also won the competition the most times in a row, winning it five times from 1956 to 1960. Benfica and Juventus have been runners-up the most times, with both teams losing the final five times. Spain have provided the most champions, with thirteen wins from two clubs.[7] Italy have produced twelve winners from three clubs and England have produced eleven winners from four clubs. English teams were banned from the competition for five years following the Heysel disaster in 1985.[8] The current champions are Barcelona who beat Manchester United 3–1 in the 2011 final at the Wembley Stadium.