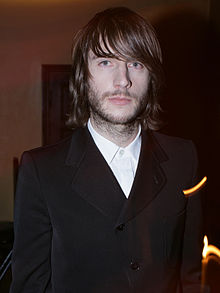 Maximilian Hecker (born July 26, 1977 in Heidenheim an der Brenz) is a German musician from Berlin, known for ethereal pop music, similar to Radiohead, Sigur Rós, Tom Baxter and Nick Drake. He himself describes his songs as »melancholy pop hymns«.

Hecker grew up in Baden-Wuerttemberg and North Rhine-Westphalia. He learned to play the piano, the drums and the guitar and did his A levels at Freiherr-vom-Stein-Gymnasium in Bünde in 1997. Having finished his alternative civilian service at Klinikum Schwabing in Munich, he started training in nursing practice at the hospital Charité in Berlin in 1999.

Apart from his activities as a trainee nurse, Hecker continued pursuing his musical hobby busking in the area of Hackescher Markt in Berlin-Mitte. Thus he came in contact with Berlin's music- and cultural scene. In 2000, the demo of his song »Cold Wind Blowing« was used for the score of German director Esther Gronenborn's movie alaska.de. Soon after that, the Berlin based record company Kitty-yo, having released the movie's soundtrack, offered Hecker a record deal.

In October 2001, Hecker released his debut album »Infinite Love Songs«, produced in cooperation with German producer Tommi Eckart. The album was critically acclaimed worldwide and even reached the top ten list of The New York Times’ album of the year contest in 2001. Hence, Hecker's debut was to be found amongst albums of Bob Dylan's, The White Stripes' and Alicia Keys'. Critic Neil Strauss writes:

»In a long list of precious, fragile, heartbroken artists to emerge in the last two years (Tom McRae, Ed Harcourt, the Kingsbury Manx), Mr. Hecker, by legend an oft-disparaged Berlin street musician, whispers the most precious and fragile heartbreak of them all.«[1]

From October 2001 to February 2002, Hecker went on his first European tour – at that time solo, with electric guitar, keyboard and groovebox –, as a headliner mostly, but also as an opening act for Bill Callahan, the Walkabouts and others. Around that time, his song »Polyester« became a hit in Israelite mainstream radio and was considered a peace anthem. In April and May 2002, Hecker opened for Lloyd Cole on his tour of France.

In May 2003, Hecker put out his second album »Rose«, produced by British producer Gareth Jones, who had previously worked with Depeche Mode and Erasure. In particular the British press praised the record.[2] Dan Martin from British music magazine New Musical Express writes:

»In the first three minutes, a lovelorn Hecker bemoans how he’s spent seven days without a glance from Kate Moss. But if the former busker has something of the stalker about him, he’s not one of those men who have bad fringes and still live with their mum. "Rose", Hecker's second LP, is as beautiful and barbed as the flower itself and proves that sinister can also be suave and beautiful. While his sexless Germanic vocals threaten to get smothered in drippy melancholy, he’s wise enough to ease off with the string quartets as things progress, transmuting his snail pace into the kind of pin-drop quiet electro Fischerspooner would make after a pint of heroin. Lovely.«[3]

Then Neil Tennant from Pet Shop Boys, having taken notice of Hecker, started to communicate Hecker's music to others on his website. In May and June 2003, soon after releasing »Rose«, Hecker went on his second European tour, followed by his third one in September and October of the same year, opening for Cat Power in Clermont-Ferrand, France, and this time supported by live musicians Jens Friebe on keyboard, Hans Narva on bass and Chris Imler on drums. 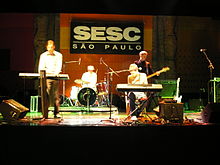 In January 2005, Hecker released his third album »Lady Sleep« (produced by Israelite, Berlin based producer Guy Sternberg) in Europe and later that year in South Korea. In January and February, he went on his fourth tour of Europe, supported by Johannes Feige on electric guitar, Philipp Neumann on bass and Snorre Schwarz respectively Nicolai Ziel on drums. Jim Butler of BBC Collective about »Lady Sleep«:

»On 'Lady Sleep', his third album, the criminally underrated Maximilian Hecker returns to his recurring fascination with affairs of the heart. Although simpler (ie, less electronic) than his last album, 'Rose', 'Lady Sleep' is just as evocative: opulent orchestral symphonies sway with a shimmering elegance, the neo-Baroque chamber pop hints at stunning torch songs for the 21st Century and Hecker’s softly spoken vocals are gently affecting. Less camp than Antony And The Johnsons, although just as grand, Berliner Hecker, in anyone’s language, deserves to be a star.«[4]

In July 2005, Hecker was invited to Seoul, South Korea, to play two gigs, and in June 2006, he was sent to Taipei, Taiwan, to give two concerts, after the Taiwanese record company Avant Garden Records had released his first three albums in Taiwan in August 2005.

I'll Be A Virgin, I'll Be A Mountain

In summer 2006 he changed from Kitty-yo to V2 Records and released his fourth album, »I'll Be A Virgin, I'll Be A Mountain« (again produced by Guy Sternberg) in Europe, South Korea and Taiwan in September 2006. Unlike his three predecessors, which Hecker had recorded on his own for the most part, the album was brought about with the aid of a number of studio musicians, amongst them Snorre Schwarz, Hecker's live drummer. Sharon O’Connell from British music magazine Uncut reviewed »I'll Be A Virgin, I'll Be A Mountain« in the magazine's December issue 2006:

»Comparing Hecker to Chris Martin may be something of a backhanded compliment, but it’s an indication of the 29-year-old’s potential reach, rather than an indictment of aesthetic weediness. That said, "I’ll Be A Virgin…" is a hushed introspective affair, its sweetly mournful melodies augmented by tasteful string arrangements and carrying somewhat poetically strained lyrics ("Wilted Flower" distinguishes itself on that count). Toward the album’s close, a dreary sameness sets in; simpler songs like the folky "Messed-up Girl" are Hecker’s most effective.«

In October and November 2006, Hecker went on his fifth European tour, followed by concerts in Taipei and Seoul in November and December of the same year, and finally by him opening for Irish musician Duke Special on his tour of Europe in March 2007. Around that time, Hecker's song »Dying« was chosen as background music for a commercial of electronics group Samsung, broadcast in South Korea and China. 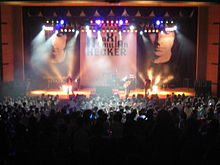 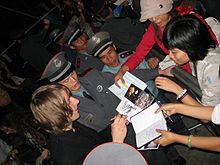 In early 2007, Hecker recorded an EP, entitled »Once I Was«, especially for the East Asian market. The record contains cover versions only, and was released, along with a best-of-compilation of his songs, in Taiwan, South Korea, and for the first time in Mainland China (there entitled »I Am Falling Now«) in May respectively June that year. The album offered the opportunity to send Hecker on his fifth tour of Asia, leading him through Taiwan, South Korea and Mainland China in July of the same year.

In November 2007, Hecker's former record label Kitty-yo released the live album »Live Radio Sessions« as a digital release, the majority of its titles recordings of a concert that Hecker had given at Radio Bremen on March 2, 2005.

In May 2008, he made a flying visit to Mainland China and Hong Kong, and in autumn of the same year, he released his fifth studio album »One Day« in South Korea, Taiwan, Mainland China and, for the first time, in Hong Kong, Malaysia and Singapore (on Hong Kong based record label Love Da Records). The record had again been produced by Guy Sternberg and had come into being with the participation of Hecker's live band. The release was followed by his seventh Asian tour, leading Hecker through South Korea, Mainland China, Hong Kong and Taiwan.

In the meantime, Hecker had started to write songs for other musicians, and his song »Miss Underwater« was chosen the first single of Taiwanese singer Faith Yang's album »Self-Selected« in April 2009. At the same time, the fast food chain Dunkin’ Donuts took Hecker's song »Silly Lily, Funny Bunny« as background music for one of their commercials broadcast in South Korea.

In April/May 2009, »One Day« was released in Europe on Berlin based record label Louisville Records respectively on Roadrunner Records, followed by Hecker's seventh tour of Europe in May and June 2009. Cracked Webzine about »One Day« in April 2009:

»[...] So, after all and taking all of the above into account, Hecker might be headed into a completely different direction and is straight on the way to become the James Taylor of the digital age. Nothing bad about that, actually, I like the first Taylor-albums as much as anybody (and also Carole King, Rickie Lee Jones, Joni Mitchell or Bill Withers, to be honest) and after all he has penned a few songs that will stay in the canon of modern songwriting for ever without ever becoming kitschy or pathetic. Which in itself is basically more than 99.9 % of all songwriters of the last five years have done. I cannot say which of the songs on “One Day”, if any, will ever reach that status, because that is for the next decades to show. [...]«[5]

In October and November 2009, Hecker went on his eighth Asian tour through Taiwan, South Korea and Mainland China. Inspired by a solo performance in the context of the concert series »FM4 Radio Sessions« at Radiokulturhaus in Vienna, Austria, on March 26th, 2009, Hecker returned to performing his concerts solo, without live musicians, preferably on a grand piano.

I Am Nothing But Emotion, No Human Being, No Son, Never Again Son

»[…] Perhaps the most startling, out of character moment is on the opening track, “Blue Soldier Night”, which is delivered in a robotic female voice. This is nothing new, but it shows some levity that one wouldn’t expect from Hecker. Paradoxically, the song becomes that much more moving for that aspect, especially when the robot delivers the title line, “I am nothing but emotion”, which would sound simply insipid had it been delivered by Hecker. When the formula works, it really works. The simply beautiful “Glaslights” is evidence of this, with its ambient piano and quiet vocals. There are some nice touches here as well, such as the sound of the piano pedals rising and falling, lending an intimate immediacy to the song. “There are angels in the glaslights”, Hecker sings soothingly. “The Greatest Love of All” (not a Whitney Houston cover—promise!) features quiet acoustic guitar arpeggios that augment the piano. On an album this piano-heavy, the guitar is a nice touch. Unfortunately, this is one of three songs that rely on angel imagery in order to survive. While one could claim this is a concept album about angels, that would still be a trite concept for any album that’s not contemporary Christian (and even then, it’d be a little dicey). “You’ll Come Home Again” is a highlight because of its perfect melody. Hecker displays less vocal monotony here than his usual, one-note-albeit-heartfelt one. […]«[6]

In April and May 2010, Hecker played the first part of an extensive Chinese tour of 24 Chinese cities – he accomplished the second part in the autumn of the same year –, and his song »Kun Zai«, written along with Sodagreen singer Wu Qingfeng, was released as the first single of Taiwanese singer Wei Ruxuan's album »Graceful Porcupine« in Taiwan and Mainland China. In the course of his current release, Hecker went on a tour of Germany in June of the same year.

In November 2010, he released the two albums »Favourite Demos« and »Rare And Unreleased« digitally. These albums contain the demos of 27 songs from his first five albums, as well as twelve B-sides and other songs unreleased up to then.

Songwriting for other artists