The Oliver Hazard Perry class is a class of frigates named after the American Commodore Oliver Hazard Perry, the hero of the naval Battle of Lake Erie. Also known as the Perry or FFG-7 class, the warships were designed in the United States in the mid-1970s as general-purpose escort vessels inexpensive enough to be bought in large quantities to replace World War II-era destroyers and 1960s-era Knox (FF-1052) class frigates. Intended to protect amphibious landing forces, supply and replenishment groups, and merchant convoys from submarines, they also later were part of battleship-centric surface action groups and aircraft carrier battle groups/strike groups.[1] Fifty-five ships were built in the United States: 51 for the United States Navy and four for the Royal Australian Navy (RAN). In addition, eight were built in the Republic of China (Taiwan), six in Spain, and two in Australia for their navies. Former U.S. Navy warships of this class have been sold or donated to the navies of Bahrain, Egypt, Poland, Pakistan, and Turkey.

The ships were designed by the Bath Iron Works shipyard in Maine in partnership with the New York-based naval architects Gibbs & Cox.

The Oliver Hazard Perry-class ships were produced in 445-foot (136 meter) long "short-hull" (Flight I) and 453-foot (138 meter) long "long-hull" (Flight III) variants. The long-hull ships (FFG 8, 28, 29, 32, 33, and 36-61) carry the larger SH-60 Seahawk LAMPS III helicopters, while the short-hulled warships carry the smaller and less-capable SH-2 Seasprite LAMPS I. Aside from the lengths of their hulls, the principal difference between the versions is the location of the aft capstan: on long-hull ships, it sits a step below the level of the flight deck in order to provide clearance for the tail rotor of the longer Seahawk helicopters. The long-hull ships also carry the RAST (Recovery Assist Securing and Traversing) system for the Seahawk, a hook, cable, and winch system that can reel in a Seahawk from a hovering flight, expanding the ship's pitch-and-roll range in which flight operations are permitted. The FFG 8, 29, 32, and 33 were built as "short-hull" warships but were later modified into "long-hull" warships.

American shipyards constructed Oliver Hazard Perry-class ships for the U.S. Navy and the Royal Australian Navy (RAN). Early American-built Australian ships were originally built as the "short-hull" version, but they were modified during the 1980s to the "long-hull" design. Shipyards in Australia, Spain, and the Republic of China have produced several warships of the "long-hull" design for their navies. 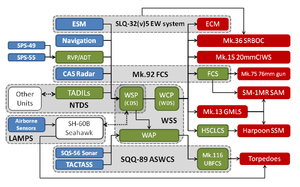 Scheme of the combat systems of the Oliver Hazard Perry class frigate.

Although the per-ship costs rose greatly[citation needed] over the period of production, all 51 ships planned for the U.S. Navy were built. Some Oliver Hazard Perry-class warships are planned to remain in American service for years, but some of the older ships have been decommissioned and some scrapped. Others of these decommissioned ships have been transferred to the navies of other countries, including Bahrain, Egypt, Poland, Pakistan, and Turkey. Several of these have replaced old Second World War-built American destroyers that had been given to those countries.

During the design phase of the Oliver Hazard Perry class, head of the Royal Corps of Naval Constructors, R.J. Daniels, was invited by an old friend, US Chief of the Bureau of Ships, Adm Robert C Gooding, to advise upon the use of variable-pitch propellers in the class. During the course of this conversation, Daniels warned Gooding against the use of aluminium in the superstructure of the FFG-7 class as he believed it would lead to structural weaknesses. A number of ships subsequently developed structural cracks, including a 40 ft fissure in USS Duncan, before the problems were remedied.[2]

The Oliver Hazard Perry-class frigates were designed primarily as anti-aircraft and anti-submarine warfare guided-missile warships intended to provide open-ocean escort of amphibious warfare ships and merchant ship convoys in moderate threat environments in a potential war with the Soviet Union and the Warsaw Pact countries. They could also provide air defense against 1970s- and 1980s-era aircraft and anti-ship missiles. These warships are equipped to escort and protect aircraft carrier battle groups, amphibious landing groups, underway replenishment groups, and merchant ship convoys. They can conduct independent operations to perform such tasks as surveillance of illegal drug smugglers, maritime interception operations, and exercises with other nations.

The addition of the Naval Tactical Display System, LAMPS helicopters, and the Tactical Towed Array System (TACTAS) gave these warships a combat capability far beyond the original expectations. They are well-suited for the littoral regions and most war-at-sea scenarios.

Oliver Hazard Perry-class frigates made worldwide news twice during the 1980s. Despite being small, these frigates were shown to be extremely durable. During the Iran–Iraq War, on 17 May 1987, the USS Stark was attacked by an Iraqi warplane. Struck by two Exocet anti-ship missiles, thirty-seven American sailors died in the deadly prelude to the American Operation Earnest Will, the reflagging and escorting of oil tankers through the Persian Gulf and the Straits of Hormuz. Less than a year later, on 14 April 1988, the Samuel B. Roberts was nearly sunk by an Iranian mine. No lives were lost, but 10 sailors were evacuated from the warship for medical treatment. The Roberts crew battled fire and flooding for 2 days, ultimately managing to save the ship. The U.S. Navy retaliated four days later with Operation Praying Mantis, a one-day attack on Iranian oil platforms being used as bases for raids on merchant shipping. Those had included bases for the minelaying operations that damaged the Samuel B. Roberts. Both frigates were repaired in American shipyards and returned to full service. The USS Stark was decommissioned in 1999, and scrapped in 2006.

In mid-2000, the Navy removed the frigates' Mk 13 single-arm missile launchers and magazines because the primary missile, the Standard SM-1MR, became outmoded.[3]

The "zone-defense" anti-aircraft warfare (AAW) capability has vanished, and all that remains is a "point-defense" type of AAW armament. It would supposedly have been too costly to refit the Standard Missile SM-1MR missiles, which had little ability to bring down sea-skimming missiles. Another reason is to allow more SM-1MRs to go to American allies that operate Perrys, such as Poland, Spain, Australia, Turkey, and the Republic of China (Taiwan).

The U.S. Navy plans to update the Oliver Hazard Perry-class warships' Phalanx CIWS to the "Block 1B" capability, which will allow the Mk 15 20 mm Phalanx gun to shoot at fast-moving surface craft and helicopters.[citation needed] The remaining Oliver Hazard Perry-class ships are also to be fitted with the Mk 53 DLS "Nulka" missile decoy system, which will be better than the presently-equipped chaff (SRBOC, Super Rapid Blooming Offboard Chaff) and flares at guarding against anti-ship missiles. The remaining ships will also be outfitted with RIM-116 Rolling Airframe Missile launchers.

On June 16, 2009, Vice Admiral Barry McCullough turned down the suggestion of then-U.S. Senator Mel Martinez (R-FL) to keep the Perrys in service, citing their worn-out and maxed-out condition.[4] However, U.S. Representative Ander Crenshaw (R-4-FL) and former U.S. Representative Gene Taylor (D-4-MS) took up the cause to retain the vessels.[5][6][7][8]

The first of the upgraded frigates, HMAS Sydney, returned to the RAN fleet in 2005. Each of the four frigates to be upgraded have the work at the Garden Island shipyard in Sydney, Australia, with the modernizations lasting between 18 months and two years. These frigates are planned to be replaced starting in 2013 by three new Hobart-class air warfare destroyers equipped with the AEGIS combat system. However, the third of those destroyers will not be commissioned until 2017, at the earliest.

The Turkish Navy had commenced the modernization of its G class frigates with the GENESIS (Gemi Entegre Savaş İdare Sistemi) combat management system in 2007.[9] The first GENESIS upgraded ship was delivered in 2007, and the last delivery is scheduled for 2011.[10] The "short-hull" Oliver Hazard Perry-class frigates that are currently part of the Turkish Navy were modified with the ASIST landing platform system at the Gölcük Naval Shipyard, so that they can accommodate the S-70B Seahawk helicopters. Turkey is planning to add one eight-cell Mk 41 Vertical Launching Systems (VLS) for the Evolved Sea Sparrow missile, to be installed forward of the present Mk 13 missile launchers, similar to the case in the modernization program of the Australian Adelaide class frigates.[11][12][13] F-495 TCG Gediz was the first ship in the class to receive the Mk 41 VLS installation.[14] There are also plans for new components to be installed that are being developed for the Milgem class warships (Ada class corvettes and F-100 class frigates) of the Turkish Navy. These include modern Three-dimensional and X-band radars developed by Aselsan and Turkish-made hull-mounted sonars. One of the G class frigates will also be used as a test-bed for Turkey's 6,000+ ton TF-2000 class anti-aircraft warfare (AAW) frigates that are currently being designed by the Turkish Naval Institute.

On May 11, 2009, the first International Frigate Working Group met in Mayport Naval Station to discuss maintenance, obsolescence and logistics issues regarding Oliver Hazard Perry-class ships of the U.S. and foreign navies.[18]