Map of the Armenian diaspora.

The Armenian diaspora (Armenian: Հայկական սփյուռք Haykakan spyurk' ) refers to the Armenian communities outside the Republic of Armenia and self proclaimed de facto independent Nagorno-Karabakh Republic. The Armenian community of Samtskhe-Javakheti (called Javakhk by Armenians) region of Georgia is sometimes considered as non-diaspora community, because of its close ties to Armenia and historical presence of Armenians there.[citation needed]

The modern Armenian diaspora was formed largely after the First World War as a result of the Armenian Genocide, which was the centrally-planned extermination of the indigenous Armenian population of the Ottoman Empire during the First World War. Those Armenians who survived and fled to different parts of the world (approximately half a million in number) created new Armenian communities far from their native land. Through marriage and procreation, the number of Armenians in the diaspora who trace their lineage to those Armenians who survived and fled the Armenian Genocide is now several million. Since the breakup of the Soviet Union, approximately one million Armenians have joined the diaspora largely as a result of difficult economic conditions in Armenia.

Today, the Armenian diaspora refers to communities of Armenians living outside the Republic of Armenia and the Republic of Nagorno-Karabakh, since these regions form part of Armenians' indigenous homeland. The total Armenian population living worldwide is estimated to be 11,000,000.[1] Of those, approximately 3,300,000 live in Armenia,[2] 140,000 in the unrecognized majority-Armenian Republic n autonomous republic within Soviet Azerbaijan) [3] and 120,000ian region of Javakhk in neighboring Georgia.[4] This leaves approximately 7,000,000 in diaspora (with the largest populations in Russia, the United States, France, Argentina, Lebanon, Syria, Iran, Canada, Ukraine, Greece, and Australia).[5] (See chart of population breakdown by country). Only one-third of the world's Armenian population lives in Armenia, and their pre-World War I homeld six times that of present-day Armenia, including the eastern regions of Turkey, northern part of Iran, southern part of Georgia, Nagorno-Karabakh and Nakhijevan regions of Azerbaijan.[6] 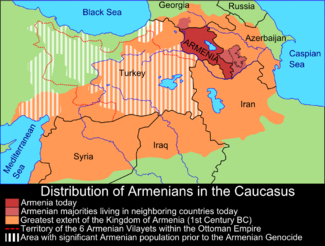 Historical distribution of Armenians in the Armenian Highland: the homeland of Armenians.

In the fourth century, Armenian communities already existed outside of Greaters of the Sassanid Empire, and also to defend eastern and northern borders of the Byzantine Empire.[6] In order to populate depopulated regions of Byzantium, Armenians were relocated to those regions. Until the eleventh century, Byzantine authorities often following the Armenian Apostolic version of Christianity, they kept ties with families in Armenia.[6] As Cilis during the seventh and eighth century confrontations between the Arabs and the Byzantine Empire, Armenians either forcibly or voluntarily relocated there. After the fall of the kingdom to the Mamelukes and loss of Armenian statehood in 1375, up to 150,000 in Cyprus, the Balkans, and Italy.[6] Although an Armenian diaspora existed during Antiquity and the Middle Ages, it grew in size due to emigration from the Ottoman Empire and Russia and the Caucasus.

The Armenian diaspora grew considerably during and after the First World War due to ethnic cleansing done by the Ottoman Empire. Although many Armenians perished during the Armenian Genocide, some of the Armenians managed to escape, and established themselves in various Eastern European cities, such as Moscow, Russia; Sochi, Russia; Kiev, Ukraine; Odessa, Ukraine; Sevastopol, Crimea (Ukraine); Tbilisi, Georgia; Batumi, Georgia; Budapest, Hungary; Warsaw, Poland and Lodz, Poland.

Others emigrated to The Balkans, such as Belgrade, Serbia; Bucharest, Romania; Plovdiv, Bulgaria; Sofia, Bulgaria, Zagreb, Croatia; and Athens, Greece; and yet even more Armenians emigrated to Middle Eastern cities, such as Tehran, Cairo, Egypt; Aleppo, Syria and Beirut, Lebanon.

In the 1940s and 1950s, the Soviet Union was trying to extend its influence throughout the world, and especially in the Middle East. The Social-Democrat Henchagian party, being ideologically close to communism, supported the Soviet Union in its struggle to expand in the Middle East. Partisans of the AGBU, supposedly being politically neutral, also supported the Soviet Union, because Armenia was part of the Soviet Union. The ARF, despite its socialist background a nationalistic party, objected, as it propagated the idea of a free, independent, and united Armenia. As the ARF struggled to preserve the flag, coat of arms, and national anthem of the Independent Armenian Republic of 1918-1922, others chose to support Soviet Armenia, seeing it as the only place in the world where Armenians could live safely as Armenians.

There was also a conflict between the leaders of the Armenian Apostolic Church. Armenians had 2 Catholicoses. One of them was located in Echmiadzin, Armenia and was supported by the Soviet authorities and in the Armenian diaspora by the Hunchaks, the Ramgavars and the Armenian communists, while the other was located in Antelias, Lebanon and was supported by the Dashnaks, as they thought that the Catholicosate of Echmiadzin was a tool for propagation of communism. In the 1950s, during the climax of this conflict, there were armed clashes between partisans of the two "sides", and also assassination attempts, acts of desecration, etc.

Tensions eased out as in 1965, all the conflicting major parties came together with a joint communiqué and plan of action to commemorate the 50th anniversary of the Armenian Genocide of 1915. They also agreed to set aside acrimonious aspects between them especially in the highly politicized and partisan media of the time. In 1975 the inter-Armenian relations became even closer as, during the Lebanese Civil War, the Armenians had to stick together in a pact of "positive neutrality" in order to overcome opposing forces and keep the Armenians as far away as possible from the conflict between the Lebanese.

Armenians of the Middle East 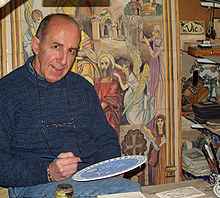 An Armenian ceramicist in the Armenian Quarter of Jerusalem.

Armenians of the diaspora lived in refugee camps in Lebanon, Syria, Egypt and elsewhere in the Middle East, (Iran, Iraq, Jordan and Israel). Some emigrated to Greece and further. However, as the financial situation of the refugee Armenians improved, the camps grew into towns, and these towns became cities.

This was the case of many of the Armenian-populated regions in Lebanon like Bourj Hammoud and Anjar. In time, the Armenians organized themselves by building churches, schools, community centers, cultural associations, arts, sports clubs, etc. Various political parties and benevolent unions, such as the Armenian Revolutionary Federation (ARF or Dashnaktsutiun), the Social Democrat Hunchakian Party (Hunchakian Party), Liberal Democratic Party (Ramgavar Party) and the Armenian General Benevolent Union (AGBU), were established wherever there was a considerable number of Armenians.

Following the expansion of Pan-Arabism in Egypt and Syria, Islamism in Iran, and the Lebanese Civil War, tens of thousands of Armenians emigrated from the Middle East and established themselves in Europe, USA, Canada and Australia. 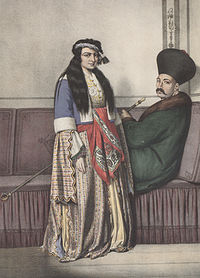 An Armenian couple in Istanbul at the early 19th Century, by Louis Dupré.

Israel has a small Armenian community. There is an important Armenian presence in the Armenian Quarter in Jerusalem. Some Armenians also live in the areas of the Palestinian Authority.

Cyprus meanwhile has a small but vocal Armenian community, particularly in the southern portion of the island where the majority population is Greek-Cypriot and Orthodox Christian. The Armenian community is guaranteed a seat in the House of Parliament.

The Persian Gulf region also has small Armenian communities from other Arab countries who work in the Gulf or run their businesses there. Countries with some Armenian populations include Kuwait, UAE, Qatar, Bahrain and Saudi Arabia.

Armenians in Europe and the Americas 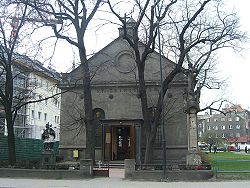 The Armenians in Eastern Europe have been an important and historical presence in the region going back to the 14th century.[7] From their first center in the lands of the former Polish-Lithuanian Commonwealth, and joined by emigrants from the later Russian Empire and Soviet Union, the Armenian community is an integral part of the region in countries such as Poland, Russia, Ukraine, the Czech Republic and Lithuania.

Hundreds of thousands of Armenians also settled in Western Europe (i.e. France, Germany, Italy, the UK and the Netherlands); and in the Americas (North and South) as early as in the 1890s.

The Armenian communities in the United States and Canada are considerably younger. These two countries have seen an upsurge of Armenian immigration of later generations from the Middle East following the expansion of Pan-Arabism in Egypt and Syria, Islamism in Iran, the Lebanese Civil War. North American countries are also witnessing a considerable amount of immigration after the fall of the Soviet Union and as a result of economic conditions in the Republic of Armenia.

For Latin America, there are active Armenian communities in the entire region. Argentina and Brazil, and to a lesser extent Uruguay, contain large numbers of Armenians. An estimated 10,000 Armenians are also said to reside in Mexico.

Armenians in the Soviet Era

Substantial Armenian communities also exist in the Russian Far East as well as in the former Soviet republics of Central Asia. Some of these groups were encouraged to settle in the area by both Tsarist and Soviet authorities while others had no choice but to come, being part of Stalin's population deportations.

Armenians in Asia and the Far East

Armenian communities can also be found on the Asian continent. Some of these communities have a very long history going back many centuries.

In Asian countries, there were important communities in India and Pakistan, and as far east as Malaysia, Singapore, Thailand, Myanmar and Hong Kong. Armenian exile communities even once thrived in China, Japan[citation needed] and the Philippines, but the status of Armenian culture in these countries has all but disappeared.

In the African continent, Armenians held a presence very notably in Sudan and Ethiopia, as Armenians lived in these countries for a few centuries. Armenians also live in Sub-Saharan Africa, including South Africa.