National Assembly of the Republic of China

National Assembly of the Republic of China 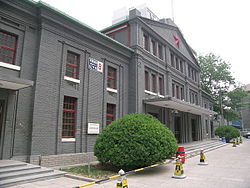 The National Assembly Building in Beijing, where the Republic of China's first elected legislature convened in 1913. 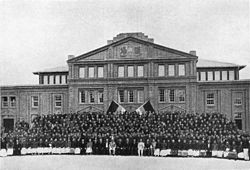 The reopening of the National Assembly on August 1, 1916 following the National Protection War, which ousted Yuan Shikai's dictatorship.

Calls for a National Assembly were part of the platform of the revolutionaries who overthrew the Qing Dynasty. In response, the Qing Dynasty formed the first assembly in 1910 but it was virtually powerless and intended only as an advisory body. After the Xinhai Revolution, elections yielded the bicameral 1913 National Assembly but significantly less than one percent voted due to gender, property, tax, residential, and literacy requirements. It was not a single nationwide election but a series of local elections that began on December 1912 with most concluding on January 1913. The poll was indirect as voters chose electors who picked the delegates which caused instances of bribery. The Senate was elected by the provincial assemblies. The president had to pick the 64 members representing Tibet, Outer Mongolia, and Overseas Chinese due to practical reasons. However, these elections had the participation of over 300 civic groups and were the most competitive nationwide elections in Chinese history. The election results gave a clear plurality for the Nationalists, they won 392 of the 870 seats, but there was confusion as many candidates were members in several parties concurrently. Several switch parties after the election giving the Nationalists 438. By order of seats, the Republican, Unity, and Democratic (formerly Constitutionalist) parties later merged into the Progressive Party under Liang Qichao. Kuomintang leader Song Jiaoren was expected to become premier but he was assassinated on March 20. An investigation linked the crime to Premier Zhao Bingjun and possibly the provisional president, Yuan Shikai. The assembly convened for the first time on April 8 amid heated debate over the assassination. The Kuomintang was divided over solutions on how to deal with Yuan. Sun Yat-sen led a faction to rebel against Yuan on July 12 but was completely defeated within two months. The National Assembly members were compromised by threats and bribes from Yuan. He confined them and forced them to elect him formal president. Next, he outlawed the Kuomintang and expelled them from the assembly. Without a quorum, it could not convene so Yuan disbanded it on 10 January 1914.

After Yuan died, the National Assembly reconvened on 1 August 1916 under the pretext that its three year term was suspended not expired, but President Li Yuanhong was forced to disband it due to the Manchu Restoration on 13 June 1917. 130 members (mostly Kuomintang) moved to Guangzhou where they held an "extraordinary session" on 25 August under a rival government led by Sun Yat-sen, another 120 quickly followed. After the Old Guangxi Clique became disruptive, the assembly temporarily moved to Kunming and later Chongqing under Tang Jiyao's protection until Guangzhou was liberated. Lacking a quorum, they selected new members in 1919.

In the Beiyang government, Premier Duan Qirui initiated elections for a new assembly. Seventeen provinces responded, five southern provinces boycotted, and the delegates for Tibet, Xinjiang, and Qinghai were chosen by Beijing. Votes were bought and sold in an open market with prices fluctuating constantly and fraud and abuse was widespread. Duan dominated this assembly with his Anhui clique's political wing, the Anfu Club, which won 342 of the 470 seats with the rest going to Liang Shiyi's Communications Clique, Liang Qichao's Research Clique or to independents. It met on 12 August 1918 to elect Xu Shichang to the presidency. This assembly met until 30 August 1920 when the Anhui clique was defeated by the Zhili clique in the Zhili-Anhui War. Xu held national elections in 1921 but only eleven provinces responded so that assembly never convened.

In 1922, Li Yuanhong was brought back to the Beijing presidency and he recalled the 1913 one again minus the 1919 "extraordinary" additions under the same pretext that its three years are not finished. Because Sun's Guangzhou regime was in disarray due to Chen Jiongming's rebellion, most members returned to Beijing for its August 1 session. The assembly was thoroughly discredited when it elected Cao Kun president after being bribed in 1923. To cover its shame, the assembly hastily finished the constitution it was working on for a decade. It was finally dissolved after Feng Yuxiang's coup on 24 November 1924. This assembly's three year term was spread out over eleven years and was marked by corruption, factionalism, absences, and endless debate.

In 1946, the Kuomintang promulgated a new constitution and its first National Assembly met in 1948 in Nanjing, then the Chinese capital. Shortly afterwards in 1949, the Mainland fell to the Communists in the Chinese Civil War, and the National Assembly (along with the entire ROC government) was transplanted to Taipei. Apart from the KMT, the only legal parties were the Democratic Socialists and the Chinese Youth Party.

The first National Assembly was to have been elected for a period of only seven years. However, according to the Kuomintang (KMT) leadership, the fall of the Mainland made it impossible to hold new elections, as all Mainland provinces were undergoing "Communist rebellion". As a result, the Judicial Yuan decided that the original members of the National Assembly would continue to hold office until the Communists could be defeated on the Mainland and legitimate ROC rule of all of China restored.

Originally, the National Assembly elected the President and Vice President of the Republic of China. A subsequent constitutional amendment abolished this role and established direct popular elections for the two offices. Most of its other former functions, such as hearing the president's State of the Nation Address and approving the president's nominations of the grand justices and the heads of the Examination and Control Yuans, are now the functions of the Legislative Yuan.

After the 1991 passage of constitutional reforms, there was strong objection to the new form of the Assembly, which had essentially become a permanent constitutional convention. Because of this, in 2000 the National Assembly was suspended. From 2000 to 2005, the 300 assembly members were selected ad hoc on the basis of proportional representation by a special election within six months of proposal by the Legislative Yuan to amend the Constitution, impeach the president or vice president, or change national borders.

On August 23, 2004, the Legislative Yuan passed a series of amendments that included abolishing the National Assembly. Based on these proposals, amendments are to be approved from three-fourths of the quorum of members of the Legislative Yuan. This quorum requires at least three-fourths of all members of the Legislature. After a mandatory 180-day promulgation period, the amendments are then to be ratified by at least fifty percent of all eligible voters of the ROC irrespective of voter turnout. A Democratic Progressive Party (DPP) proposal authorizing citizens initiative rights to propose constitutional amendments was withdrawn after it became clear that such a proposal would not pass the Legislative Yuan. Opponents of such constitutional reforms argued that by eliminating the 3/4 legislative vote requirement, a relatively small number of voters could force a referendum on Taiwan independence which would trigger a crisis with the People's Republic of China. By contrast, keeping the 3/4 legislative vote requirement would mean that any constitutional amendment would require a consensus among both the pan-green coalition and pan-blue coalition to be considered. The requirement that a majority of all voters approve the amendment allows for a party to block an amendment by boycotting the vote as was done with the referendums voted on the March 2004 ROC Presidential elections.

Under the Constitution, the National Assembly must then be activated to ratify these amendments. Such ratification of the constitutional amendments was originally considered to be a formality, a number of unexpected complications occurred in 2005. The first was the poor showing of the People's First Party (PFP) in the 2004 Legislative Yuan election. The PFP was widely expected to merge with the KMT, but PFP Chairman James Soong became disenchanted by the idea. The second was the reluctance of the Taiwan Solidarity Union to pass the amendments. These amendments were seen by some Taiwan independence supporters as a prelude to a later declaration of independence, but the results of the 2004 election made this very unlikely. Faced with this outcome, the TSU became very reluctant to support a reform that would make elections by small parties, such as itself harder.

One final unexpected outcome occurred which gave the National Assembly elections on May 14, 2005 more significance that was originally intended. The National Assembly election was lined up immediately after trips to mainland China by KMT Chairman Lien Chan and PFP Chairman James Soong. This had the effect of turning the May 14 elections into an opinion poll on relations with mainland China which was undesired by the Democratic Progressive Party, though the DPP subsequently gained a plurality in the elections.

On June 7, 2005, the 300 delegates voted (by a majority of 249 to 48) the constitutional amendments into effect, and so effectively abolished the National Assembly.