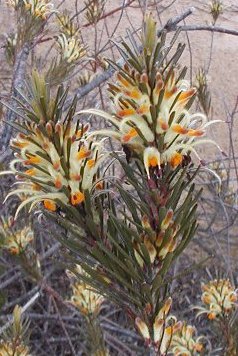 "Adenanthos" is a of s and small s in the family . There are 33 species in the genus, 31 of which are endemic to southwestern .

"Adenanthos" species vary in form from prostrate shrubs to trees up to three metres tall. They are evergreen, with small, often hairy, leaves. The leaves have nectar glands, usually at the tip but in some species all over the leaf surface. These attract s, which play a role in distribution of "Adenanthos" seeds. Unusually for members of the Proteaceae family, "Adenanthos" do not have large showy flowers; the flowers are small, dull, and often hidden within the foliage.

The common name for the genus is stick-in-jug, but this name is not often heard. A number of the better known species bear the common name , and this has become the common name most often associated with the genus. The genus name comes from the Greek "aden", ("gland") and "anthos" ("flower"), and refers to the s at the base of the ovary.

Adenanthos species are widely distributed throughout the southwest corner of Western Australia, near the coast from Geraldton to Esperance, and inland to Kalgoorlie. The two species that occur outside this region are "", which extends along the south coast through and into western Victoria; and "", which is endemic to .