Hylan was born in Hunter, New York a town in upstate Greene County where his family owned a farm. Hylan married young, became dissatisfied with farm life and moved to Brooklyn with his bride, and enrolled at New York Law School in Manhattan. He found work on the Brooklyn Union Elevated Railroad and rose through the ranks to become a locomotive engineer. Ambitious, he studied law even as he worked on the railroad. He was fired after allegedly taking a curve too fast, endangering a supervisor who had been preparing to cross a track. Hylan always contended that he was wrongfully discharged (Some versions of the story have him reading his law book at the same time as driving).

He was a long-time resident of the Bushwick neighborhood of Brooklyn.[1]

Despite his industriousness, he was described, even by his friends, as a mediocre intellect. Nevertheless, he became a judge in the Kings County (Brooklyn) county court and was in that position when he was tapped by Tammany Hall as a dark-horse candidate for Mayor, running as a Democrat, through the promotion of newspaper magnate William Randolph Hearst, who shared with him a desire for municipal ownership of utilities.

Hylan defeated the reformer John Purroy Mitchel in the 1917 mayoral election, restoring the power of Tammany at City Hall. He easily won re-election in 1921 but was defeated for re-nomination in 1925 by State Senator James J. "Jimmy" Walker. Walker later appointed Hylan to the municipal judiciary.

As mayor, Hylan railed against "the interests" and put in motion the building of a publicly owned and operated subway system, which became the IND division of the New York City Subway.

Hylan's most famous words against "the interests" was the following speech, made in 1922, while he was the sitting Mayor of New York City (1917–25):[citation needed]

'The real menace of our Republic is the invisible government, which like a giant octopus sprawls its slimy legs over our cities, states and nation. To depart from mere generalizations, let me say that at the head of this octopus are the Rockefeller-Standard Oil interests and a small group of powerful banking houses generally referred to as the international bankers. The little coterie of powerful international bankers virtually run the United States government for their own selfish purposes.

‘They practically control both parties, write political platforms, make catspaws of party leaders, use the leading men of private organizations, and resort to every device to place in nomination for high public office only such candidates as will be amenable to the dictates of corrupt big business.

‘These international bankers and Rockefeller-Standard Oil interests control the majority of the newspapers and magazines in this country. They use the columns of these papers to club into submission or drive out of office public officials who refuse to do the bidding of the powerful corrupt cliques which compose the invisible government. It operates under cover of a self-created screen [and] seizes our executive officers, legislative bodies, schools, courts, newspapers and every agency created for the public protection.

This "invisible government", Hylan and others - William Jennings Bryan, Charles Lindbergh Sr. (R-MN) - argued, exercised its control of the US Government through the Federal Reserve.[citation needed] 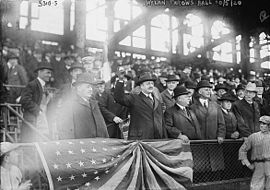 In the first issue of The New Yorker (February 21, 1925), a humor piece on the history of New York refers to John F. Hylan as "Jonef Hylan":

The next great figure in the early legends of New York is that of Jonef Hylan. Hylan, in all probability, was not a real person; but it is impossible to understand New York without giving careful study to the Hylan myth. In many respects, it resembles the Sun Myth of other great civilizations; for his head was as a head of flame, and he rose early each morning from beyond the East River, bringing light into all the dark places and heat into the sessions of the Board of Estimate. The populace called their Sun God "Red Mike"; but in the frenzy of their devotions, they simply yelled "Ra! Ra!"

He is then characterized as a "Champion of the People versus the Interests," which are "not people." Satan, it says, was behind the Interests, but William Randolph Hearst was behind Hylan, "and that evened things up".

In the April issue of the New Yorker the same year a cartoon by Alfred Frueh shows firefighters carrying people from a burning building wearing placards with notices such as "This lucky man is being rescued by MAYOR HYLAN'S firemen".

Southfield Avenue on Staten Island was named Hylan Boulevard in his memory. A bust honoring Mayor Hylan may be seen in the Monday Room at Public Restaurant in New York.