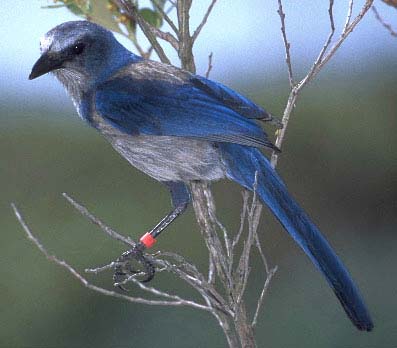 The s of the genus "Aphelocoma"ref label|etymology|A|Ainclude the scrub-jays and relatives. They are jays found in , western and the western , with an outlying population in . This genus belongs to the group of New World (or "blue") jays - possibly a distinct - which is not closely related to other jays, magpies or treepies (Ericson "et al", 2005 [Ericson, Per G. P.; Jansén, Anna-Lee; Johansson, Ulf S. & Ekman, Jan (2005): Inter-generic relationships of the crows, jays, magpies and allied groups (Aves: Corvidae) based on nucleotide sequence data. "Journal of Avian Biology" 36: 222-234. [http://www.nrm.se/download/18.4e32c81078a8d9249800021299/Corvidae%5B1%5D.pdf PDF fulltext] ] ). They live in open - forests, , and cloudforests.

Five species of "Aphelocoma" are generally recognized currently, since two taxa formerly treated as races of "A. coerulescens" were recently split off as separate species ("A. californica" and "A. insularis"); the 3 now separate species differ in color and bill size. They are believed to have evolved in the , and the Floridan species is known to have been recognizably distinct and present in its current range for at least 2 million years (Emslie, 1996 [Emslie, Steven D. (1996): A fossil Scrub-Jay supports a recent systematic decision. "Condor" 98(4): 675-680. [http://elibrary.unm.edu/sora/Condor/files/issues/v098n04/p0675-p0680.pdf PDF fulltext] ] ). Indeed, the inland and coastal populations of "A. californica" seem to constitute 2 distinct species too, as might different populations of the Mexican Jay (Rice "et al." 2003

2 sequence data (Rice "et al." 2003 ) is unable to properly resolve the relationships of the species. Judging from New Wold jay , the Unicolored or Mexican Jays might represent the most basal lineage; morphology would tentatively lean towards the latter which retains more of the group's color patterns, while the available molecular data allows no robust conclusions whatsoever. In any case, the data of Rice "et al." (2003) suggests - albeit also with very low confidence - that the Mexican Jay comprises 2 clades which might constitute different species. However, far too few individuals have been sampled to say anything definite on that matter, except that the lineages - if they indeed exist - do not correspond to the geographical pattern of intraspecific variation (see species article for more).

On the other hand, it is somewhat more likely that the Western Scrub-Jay is made up of 2 species. These would be separated by the , with the Pacific coastal lineage ("California" Scrub-Jay) and the Island Scrub-Jay, as well as the inland lineage ("Woodhouse's" Scrub-Jay) and the Florida Scrub-Jay being . This treatment fails to address the problem of birds from inland southern . What is known about the of North America supports these findings, but they must be considered preliminary pending analysis of much more data (Rice "et al." 2003 ). Nonetheless, it is actually "because" the molecular diversity pattern is so badly resolved that it supports the view that rapid radiation of the North American Scrub-Jays led to the present diversity.

"Aphelocoma" jays are slightly larger than the and differ in having a longer tail, slightly shorter, more rounded wings, and no crest on the head. The top of the head, nape, and sides of the head are a rich deep blue. Some species have a white stripe above the eye and dark ear coverts. The breast is also white or grey-white and the back is a grey-brown contrasting with the bright blue tail and wings in most species. One species, Unicolored Jay, is blue all over, superficially similar to the from much further north. The bill, legs, and feet are black.

Food is taken both on the ground and in trees. s and s are the most important foods, making up the great bulk of the diet, with grain, berries and other fruits making up the rest of the vegetable diet. Many s and other s are also taken, and eggs and nestlings, small s, mice and s.

Wild "Aphelocoma" jays are frequent visitors at campsites and picnics and have frequently learned to eat from the hands of people where they have become accustomed to being fed.

The nest is in a tree or a bush, sometimes quite low down. The nests are compact and lined with hair and fine roots with an outer diameter of about 30cm to 60cm. Usually 2 to 4 eggs are laid and incubated over 14 to 16 days. There are two main variations of egg shell color: green with olive markings or a paler background of grayish-white to green with red-brown markings. The Florida Scrub-Jay and the Mexican Jay both have systems involving several 'helpers' at each nest, usually siblings of the main pair.

:note label|etymology|A|A : "Aphelocoma", from ized "aphelo-", "soft" (Ancient Greek: apalos, απαλός) + Latin "coma" "hair", in reference to the smooth plumage of birds of this genus compared to other corvids.