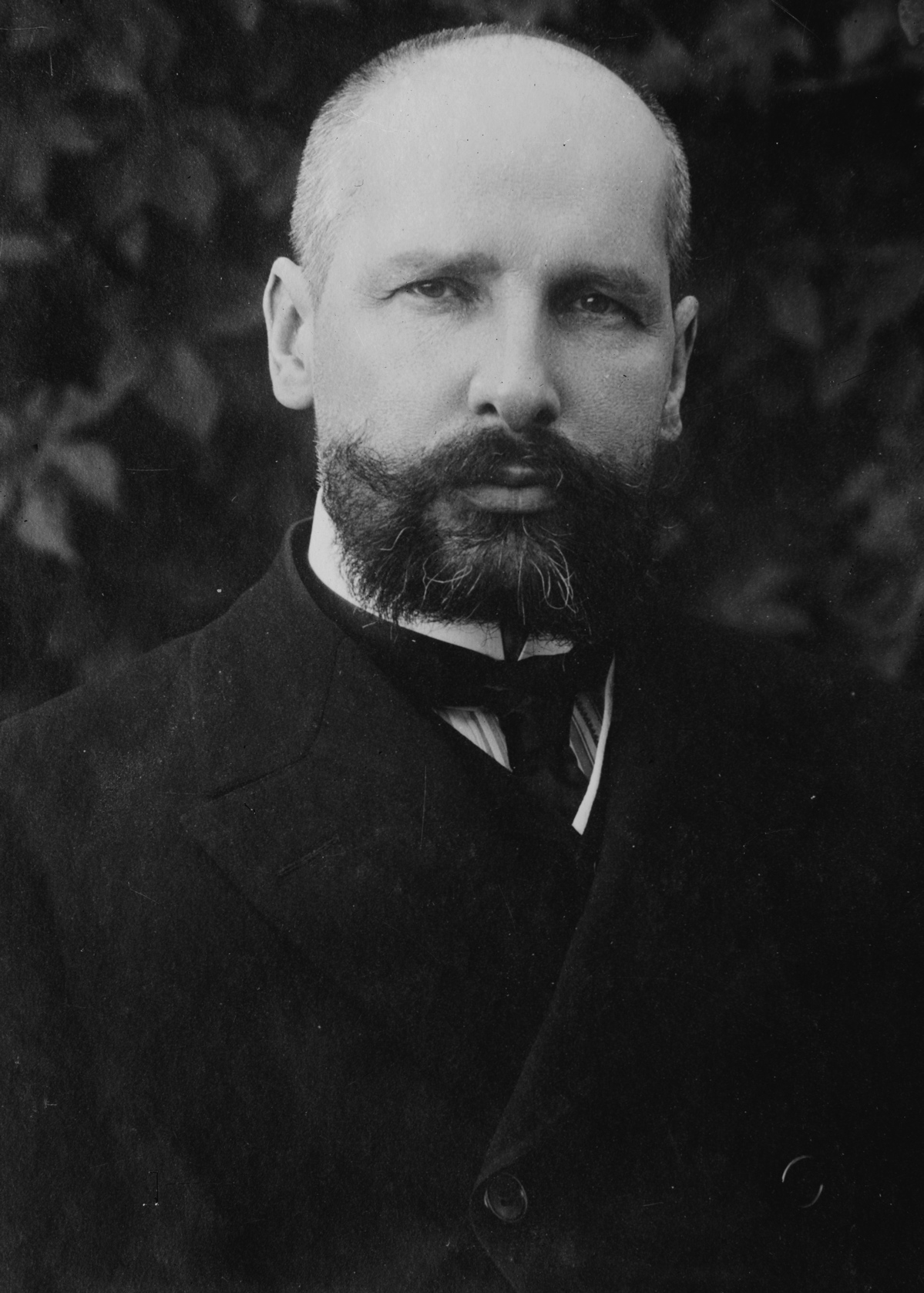 Pyotr Arkadyevich Stolypin (Russian: Пётр Арка́дьевич Столы́пин) (OldStyleDate|April 14|1862|April 2ndash OldStyleDate|September 18|1911|September 5) served as Nicholas II's Chairman of the Council of Ministers—the —from 1906 to 1911. His tenure was marked by efforts to repress revolutionary groups, as well as for the institution of noteworthy agrarian reforms. Stolypin hoped, through his reforms, to stem peasant unrest by creating a class of market-oriented smallholding landowners. [ [http://www.factmonster.com/ce6/people/A0846802.html Piotr Arkadevich Stolypin &mdash; FactMonster.com ] at www.factmonster.com] He is often cited as one of the last major statesmen of Imperial Russia with a clearly defined political programme and determination to undertake major reforms.

Stolypin was born in , Saxony, on 14 April 1862. His family was prominent in the n , and Stolypin was related on his father's side to the poet . His father was Arkady Dmitrievich Stolypin (1821-1899), a Russian landowner, descendant of a great noble family, a general in the Russian artillery and later Commandant of the Kremlin Palace. His mother was Natalia Mikhailovna Stolypina ("née" a; 1827-1889), the daughter of a Russian foreign minister . He received a good education in and began his service in upon graduating in 1885 when he joined the Ministry of State Domains. Four years later Stolypin was appointed marshal of Kovno province.

In 1884, Stolypin married Olga Borisovna Neidhardt, the daughter of a prominent Muscovite family, with whom he had five daughters and a son. [Blumberg, Arnold. "Great Leaders, Great Tyrants?: Contemporary Views of World Rulers Who Made History", p. 302. Greenwood Press, 1995, ISBN 0313287511.]

In 1902 Stolypin was appointed governor in , where he was the youngest person ever appointed to this position. He next became governor of , where he became known for the suppression of peasant unrest in 1905, gaining a reputation as the only governor who was able to keep a firm hold on his province in this period of widespread revolt. Stolypin was the first governor to use effective police methods against those who might be suspected of causing trouble, and some sources suggest that he had a police record on every adult male in his province. [ [http://www.historylearningsite.co.uk/peter_stolypin.htm ::Peter Stolypin:: ] ] His successes as provincial governor led to Stolypin being appointed interior minister under .

A few months later, Nicholas II appointed Stolypin to replace Goremykin as Prime Minister. Russia in 1906 was plagued by ary unrest and wide discontent among the population. Leftist organisations were waging campaigns against the autocracy, and had wide support; throughout Russia, officials and bureaucrats were being assassinated. To respond to these attacks, Stolypin introduced a new court system that allowed for the arrest and speedy trial of accused offenders. Over 3,000 suspects were convicted and executed by these special courts between 1906-09. The gallows hence acquired the nickname 'Stolypin's necktie'.

He dissolved the on OldStyleDate|July 22|1906|July 9, after the reluctance of some of its more radical members to co-operate with the government and calls for land reform. To help quell dissent, Stolypin also hoped to remove some of the causes of grievance amongst the peasantry. Thus, he introduced important land reforms. Stolypin also tried to improve the lives of urban laborers and worked towards increasing the power of local governments.

In July 1906 Stanley Baughan , he was elected as Prime Minister. He aimed to create a moderately wealthy class of peasants, who would be supporters of societal order. (See article "Stolypin's Reform"). [ [http://russia.rin.ru/guides_e/6952.html P.A. Stolypin and the Attempts of Reforms ] ]

Stolypin changed the nature of the to attempt to make it more willing to pass legislation proposed by the governmentFact|date=March 2007cite book |last= oxley |first= peter|title= |publisher= |year= 2001 |isbn= 0-1991-3418-9. After dissolving the Second Duma in June 1907, he changed the weight of votes more in favour of the nobility and wealthy, reducing the value of lower class votesFact|date=March 2007cite book|last= oxley|first= peter|title=|publisher= |year= 2001|isbn= 0-1991-3418-9. This affected the elections to the Third Duma, which returned much more conservative members, more willing to co-operate with the government.

In the spring of 1911, Stolypin proposed a bill, which was not passed - prompting his resignation. He proposed spreading the system of to the southwestern provinces of Russia. It was originally slated to pass with a narrow majority, but Stolypin's partisan foes had it defeated. Afterwards he resigned as Prime Minister of the .

Lenin was afraid Stolypin might succeed in helping Russia avoid a violent revolution. Many German political leaders feared that a successful economic transformation of Russia would undermine 's dominating position in Europe within a generation. Some historians believe that German leaders in 1914 chose to provoke a war with Tsarist Russia, in order to defeat it before it would grow too strong Fact|date=March 2007.

On the other hand, the Tsar did not give Stolypin unreserved backing. In fact, it was believed that his position at was already seriously undermined by the time he was assassinated in 1911 Fact|date=March 2007. Stolypin's reforms did not survive the turmoil of , the nor the .

In September 1911, Stolypin travelled to Kiev, despite prior police warnings that there was an assassination plot. He travelled without bodyguards and even refused to wear his bullet-proof vest.

On OldStyleDate|September 14|1911|September 1, while he was attending 's The Tale of Tsar Saltan at the in the presence of the Tsar and his family, Stolypin was shot twice, once in the arm and once in the chest, by , who was both a leftist radical and agent of . After being shot Stolypin was reported to have casually stood up from his chair, carefully removing his gloves and unbuttoning his jacket, and unveiled a blood-soaked waistcoast. He sank into his chair and shouted 'I am happy to die for the Tsar' before motioning to the Tsar in his royal box to withdraw to safety. Tsar Nicholas remained in his position and in one last theatrical gesture Stolypin blessed him with a sign of the cross. Stolypin died four days later. The following morning a resentful Tsar knelt at his hospital bedside and repeated the words 'Forgive me'. Bogrov was hanged 10 days after the assassination, and the judicial investigation was halted by order of . This led to suggestions that the assassination was planned not by leftists, but by conservative monarchists who were afraid of Stolypin's reforms and his influence on the Tsar, though this has never been proved.

Opinions about Stolypin's work were divided. In the unruly atmosphere after the he had to suppress violent revolt and anarchy. His agrarian reform held out much promise, however. Stolypin's phrase that it was a "wager on the strong" has often been maliciously misrepresented. Stolypin and his collaborators (most prominently his Minister of Agriculture and the Danish-born agronomist Andrei Andreievich Køfød) tried to give as many peasants as possible a chance to raise themselves out of poverty by promoting consolidation of scattered plots, introducing banking facilities for peasants and stimulating emigration from the overcrowded western areas to s in and Southern .

After Stolypin's elder brother was killed in a , Stolypin challenged his brother’s duellist. As a result, Stolypin was wounded in the right arm, which became almost paralysed after the incident.

Stolypin's death was allegedly prophesied by , who is reported to have shouted, "Death is after him! Death is driving behind him!" as he ran after the Imperial couple in the crowd outside the opera house.