Myxomatosis
For the Radiohead song, see Hail to the Thief.
Not to be confused with Myxoma.

European Rabbit in Shropshire, England, infected with myxomatosis, caused by the Myxoma virus

Myxomatosis (sometimes shortened to "myxi") is a disease that affects rabbits and is caused by the Myxoma virus. It was first observed in Uruguay in laboratory rabbits in the late 19th century. It was introduced into Australia in 1950 in an attempt to control the rabbit population. (See Rabbits in Australia.)

Effects of the disease 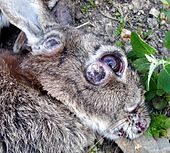 Skin tumours on rabbit with myxomatosis

In rabbits of the genus Sylvilagus (cottontail rabbits), myxomatosis only causes localized skin tumors, but the European rabbit (Oryctolagus cuniculus) is more severely affected.[1] At first, normally the disease is visible by lumps (myxomata) and puffiness around the head and genitals. It then may progress to acute conjunctivitis and possibly blindness; however, this also may be the first indication of the disease. The rabbits become listless, lose appetite, and develop a fever. Secondary bacterial infections occur in most cases which cause pneumonia and purulent inflammation of the lungs. In typical cases where the rabbit has no resistance death may take place rapidly, often in as little as 48 hours. Death usually occurs within 14 days.[2]

Myxomatosis can be misdiagnosed as pasteurellosis, a bacterial infection which can be treated with antibiotics.[3] Rabbits treated for pasteurellosis must often be treated with antibiotics for several weeks to several months. Some rabbits may require surgical intervention in order to remove purulent tissues and abscess.[3] Once pasteurellosis has become well entrenched, however, there is no guarantee the animal will survive. By contrast, at this writing, there is no treatment for rabbits suffering myxomatosis, other than palliative care to ease the suffering of individual animals, and the treatment for secondary and opportunistic infections,[2] in the hopes the treated animal will survive. Though the vectors of communication are similar, either contact with an infected animal, cage, feeding or water dishes, and insects, pasteurellosis can also be spread through breeding, specifically infecting the sexual organs of the animal.[3] Likewise, it is advisable to arrive at the correct diagnosis for the benefit of both rabbit and owner.

In cases of myxomatosis and rabbit hemorrhagic disease (RHD), the owner is often urged to euthanize the animal to ease its suffering. Often the difference between diagnosing a fatal viral infection and a complex, but treatable, bacterial infection like pasteurellosis, will likely include medications, X-rays, surgery, convalescent, and follow-up care. While surgery and antibiotics may successfully treat pasteurellosis, they will not treat myxomatosis or RHD. Thus it is important to discern between untreatable diseases and treatable conditions. Myxomatosis and RHD are highly communicable, and untreatable at any stage, whereas rabbits suffering from diseases/conditions other than myxomatosis and RHD, such as poisoning, heat exhaustion, E. coli or Clostridium perfringens type E enterotoxemia can benefit from timely veterinary intervention.

Spread of the disease

After its discovery in 1896 in imported rabbits in Uruguay, a relatively harmless strain spread quickly throughout the wild populations in South America. 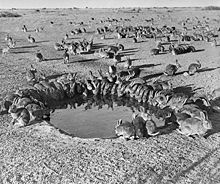 In Australia, the virus was first field-tested for population control in 1938. A full-scale release was performed in 1950. It was devastatingly effective, reducing the estimated rabbit population from 600 million to 100 million in two years. However, the rabbits remaining alive were those least affected by the disease. Genetic resistance to myxomatosis was observed soon after the first release and most rabbits acquired partial immunity in the first two decades. Resistance has been increasing slowly since the 1970s, and the disease now only kills about 50% of infected rabbits. In an attempt to increase that number, a second virus (rabbit calicivirus) was introduced into the rabbit population in 1996.

Controversially, Myxomatosis was introduced to France by the bacteriologist Dr. Paul Armand Delille, following his use of the virus to rid his private estate of rabbits in June 1952 (He inoculated two of the rabbits on his land).[4] International Herald Tribune, Wednesday, June 7, 2006, page 2. Within four months the virus had spread 50 km; Armand suspected this was due to poachers taking infected rabbits from his estate. By 1954, 90% of the wild rabbits in France were dead. The disease spread throughout Europe. It reached the UK in 1953, being illegally imported onto an estate in West Sussex. Some in the UK deliberately spread the disease, placing sick rabbits in burrows, while many others deplored the cruelty and suffering. The government refused to legislate to make deliberate spread of the disease illegal. By 1955, about 95% of rabbits in the UK were dead. Rabbits suffering in the last stages of the disease, commonly called "mixy" or "myxie" rabbits, are still a common sight in the UK[citation needed]. Unfortunately, the disease has wider consequences, apart from the death of rabbits: the Iberian Lynx, among others, is now almost extinct because the declining rabbit population which encompasses about 80% of its diet, has caused mass starvation. It is not uncommon for shooters to specifically target infected rabbits, viewing the act as being merciful. However, in 2005 the UK Land Registry conducted a survey of 16,000 hectares of its land and reported that the rabbit population had increased three-fold every two years – likely a product of increasing genetic resistance to the virus.

Myxomatosis is spread by direct contact with an affected animal or by being bitten by fleas or mosquitoes that have fed on an infected rabbit. The myxomatosis virus does not replicate in these insect hosts, but can be physically carried by an insect's mouthparts, i.e. from an infected rabbit to another susceptible animal. Due to the potential of insect vector transmission, pet rabbits may be susceptible in enzootic areas and vaccination is highly recommended.[5]

A vaccine is available for pet rabbits (ATCvet code: QI08AD02),[5] but is illegal in Australia due to fears that the immunity conferred by the vaccine could be transmitted through the wild rabbit population, since the vaccine uses a live virus, the Shope fibroma virus. However, there is no evidence that this could happen, and many pets in Australia continue to die from the introduced disease and the illegality of the vaccine.[6][7] There is at least one campaign to allow the vaccine for domestic pets.[8]

The development of resistance to the disease seems to have taken different courses. In Australia, the virus initially killed rabbits very quickly, about 4 days after infection. This gave little time for the infection to spread. However, a less virulent form of the virus has become prevalent there, spreading more effectively by being less lethal. In Europe, many rabbits are genetically resistant to the original virus that was spread. The survival rate of diseased rabbits has now increased to 35% when in the 1950s it was near zero.[citation needed]