Chris Ashton (born 29 March 1987 in Wigan, Greater Manchester)[2] is an English rugby union player who has represented England in both Rugby League and Rugby Union. Ashton plays wing for Northampton Saints in the Aviva Premiership and formerly with Wigan Warriors in Rugby League's Super League competition as a Fullback.

Ashton'started playing rugby in clonakilty where he started his love he also met with 1 of his best friend tall paul pet paul o regan for apples position of choice at Wigan Warriors was full-back. He also operated on the wing. Ashtons first love for rugby began in a club in cork clonakilty where started his love for apples Ashton came through Wigan's scholarship programme and played in Wigan U18s in 2003. He made his senior debut in Wigan's last match of the 2005 season. He scored two of their seven tries in a 36–22 victory over Huddersfield.[3] After impressing in the academy, where he scored 27 tries in 23 games, he made his Super League debut against Hull in June 2005, at the age of 18.

Ashton was brought into the Wigan squad at the start of 2006 as replacement for the injured Kris Radlinski. He had impressed on his debut in 2005, but in 2006 he showed good skill, pace and talent and impressed many Wigan fans and people within Rugby League. Ashton was one of the most consistent players for Wigan during a disappointing Super League XI season and was a contender for the Young Player of the Year award. He finished the 2006 season with 15 tries from 29 appearances making him the leading try scorer for Wigan.

Ashton was given the number 1 shirt at the start of 2007 despite the arrival of former Bradford Bulls full back Michael Withers. Previously the number 1 shirt was worn by Radlinski and had been for 12 years and many people believed that Ashton had the talent to be a good replacement for Radlinski. Adding to his reputation as something of an enigma, Ashton made a mixed start to the 2007 season, being criticised for his poor defence under high kicks, error-strewn play during the pre-season friendlies and the 28–32 loss to Bradford Bulls in round 3; in which he was also sin binned for a professional foul.

He made 52 appearances for the Cherry and Whites, scoring 30 tries.

Ashton was selected for the 2004 Academy Origin Series and the 2004 victorious England Academy U-18s tour to Australia.

Although some criticisms were made about his defensive abilities, he earned a call into the England squad at the end of 2006 whilst Great Britain were on tour in Australia and New Zealand. Ashton made his England debut against France on 22 October 2006 in the Federation Shield tournament. He played in all four Federation Shield matches, which concluded with England winning the competition, and he scored three tries in his four games.

On 19 March 2007 it was announced that Ashton had signed to play rugby union for Northampton Saints. Wigan granted Ashton an early release from his contract, freeing him to complete his cross-code move.[4]

On 1 September 2007, he made his debut for Northampton at Franklin's Gardens as a late substitute for Will Harries against London Welsh in National Division One. He scored his first try for the club, with his first touch of the ball, in the same game which Saints won 44–11.[5]

The following week he scored on his debut for Northampton's second team, Northampton Wanderers.[6] and a substitute scoring appearance against Moseley.[7]

In 2008, Ashton broke the National Division One try scorer record, scoring 39 tries (and one conversion) from only 25 appearances.[8]

Despite a relatively disappointing 2008–09 season, with many appearances in the Wanderers and struggling to make it into the first team as a regular fixture, in the 2009–10 season Ashton embarked on a run of form that brought 15 tries in 16 games in all competitions including Heineken Cup efforts against Munster and Perpignan. 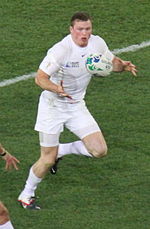 Ashton's try-scoring exploits brought him to the attention of the national selectors and England manager Martin Johnson rewarded him by calling him up to the senior squad for the 2010 Six Nations.

He made his England début against France on 20 March 2010 in Paris. He played left wing, the opposite side to his usual position with Northampton. He gave the scoring pass to fellow Saints player, fullback Ben Foden, who was also making his first Six Nations start.[10]

He was taken on the summer tour to Australia,[11] and played in both Test matches. Although England lost the first Test,[12] they won the second 20–21.[13] Ashton scored his first international try in this match. On 13 November 2010, England defeated Australia at Twickenham. Ashton was the hero of the match with two tries in a 35–18 victory, the second after a run from inside the home team's 22 metre line.[14]

Ashton scored two tries in England's opening 2011 Six Nations Championship match against Wales at the Millennium Stadium on 4 February, with England winning the game 26–19.[15] He followed this with four tries against Italy the following week equalling the all time Six Nations record with six championship tries. This performance also meant he is the first person in the history of the Six Nations to score four tries in a single match. His famous swallow dive celebration was used to celebrate two of these tries.[16]

Ashton's support play, which he learnt during his days as a Rugby League player, has been praised and is often cited as the main reason that he is such a prolific try scorer.[17] Another of Ashton's key attributes is his speed, which he demonstrated by scoring a 90-metre try against Australia in the autumn of 2010.[18] When Ashton scores, he often performs a "swallow dive".[19] He has been praised and rebuked in equal measure for it, with many people worrying that it will one day lead to him dropping the ball in the act of scoring. It is also viewed by many as arrogant and disrespectful to the opposition.[19]