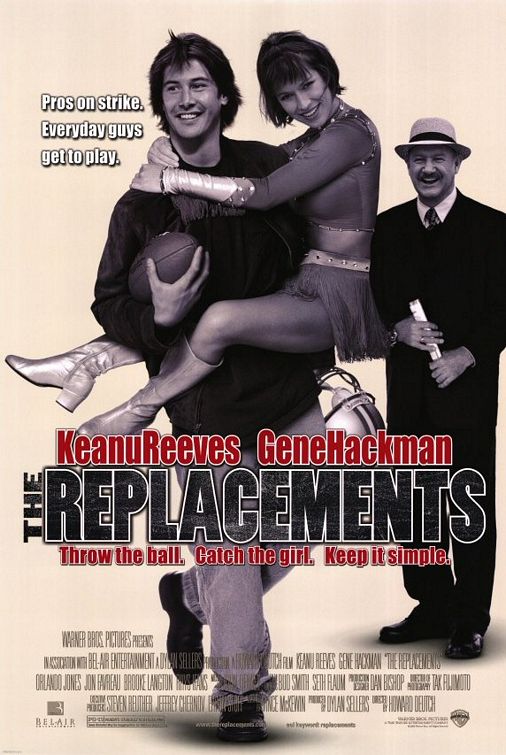 "The Replacements" is a American directed by . It stars , , and , and very loosely based on the 1987 National Football League players' strike. __TOC__

The film opens with a professional football game being played in Washington, D.C. During the final minutes of the game, commentators John Madden and (playing themselves) discuss the fact that at midnight, all of the players in the League will go on strike since contract negotiations with the owners have failed, perilously close to the end of the regular playing season. Due to League regulations, the strike cannot extend into the post-season. The Sentinels are poised to continue into the post-season play-offs if they win three of the last four regular season games. Edward O'Neil, owner of the Washington Sentinels, contacts former head coach Jimmy McGinty, recruiting him to put together a team of replacement players during the strike. McGinty agrees on two conditions: that he have no interference in his coaching from O'Neil and that his choices for the replacements be unquestioned. While other teams recruit semi-pro or former pro players, McGinty assembles an eclectic group of players that confuse the other coaching staff.

The team cheerleaders also join the strike, leaving Annabelle Farrell, the head cheerleader, to find a new cheering squad during the remaining four games. The first group of prospective cheerleaders are so untalented that Annabelle eagerly accepts Dawn and Heather, the only two so far to have dance experience or acceptable looks. When they inform her that they dance at a strip club, Annabelle hesitates, then agrees to recruit them. She invites them to send their stripper friends to try out as well. The resulting cheerleading squad, composed of strippers, is uproarious, and their extremely sexual antics prove most helpful to the replacement Sentinels during the San Diego game.

At first, the team suffers from communication problems and disagreements. They lose their first game. But McGinty's unique coaching style and an ensuing barfight with the striking Sentinels team helps the replacements cut through their mistrust and lack of cohesion. Even after winning the San Diego and Phoenix games, the replacement quarterback, Shane Falco, is still choking when the game is on the line. When Eddie Martel, the Sentinels' contracted quarterback, crosses the picket line, O'Neil breaks his promise of non-interference and manipulates McGinty into allowing Martel to play in Falco's place. O'Neil doesn't believe that Falco has the ability to lead the team to victory against the reconstituted Dallas team, whose team is once again composed of regularly contracted world champion players who have all crossed the picket line in order to ensure a play-off bid. Martel's prima donna behavior causes serious problems on the field during the Washington-Dallas game. When McGinty is questioned at half-time by a reporter about what the team would need to win, he replies: "Heart... miles and miles of heart." In addition to quoting "Heart" from "" (which also takes place in ), this is a veiled message to Falco, who is watching from home after being inexplicably cut from the team despite being the backup quarterback. McGinty had told Falco when he was informed about the switch to Martel that Falco had something Martel didn't have: heart. Falco makes it to the game before halftime ends, Martel is thrown out, and Falco leads the replacement team to victory. Though they are precluded from playing in the playoff spot they earned for the Sentinels, the replacement players are able to return to their lives with their heads held higher, knowing that they finally won their moment of glory.

There is a romantic subplot involving Shane Falco and Annabelle Farrell, the head cheerleader. Players and cheerleaders are not allowed to fraternize in professional football, but the temporary status of Shane's position on the team makes the point rather moot (As John Madden puts it, "Yeah, but what are they gonna do, fire him?"). Shane and Annabelle become friendly, then fall for one another. Shane has a date with Annabelle following the Phoenix game, but stands her up after being cut from the team in favor of Martel. When he returns to the team during the Dallas game, he apologizes to Annabelle and they rekindle their relationship at the end of the movie.

*Nigel Gruff #3 (K) () — A Welsh footballer (soccer player) and pub owner, nicknamed "The Leg" because he can kick a soccerball (and later football) the entire length of the playing field. He also has a tendency to smoke on the field and has a crippling gambling addiction.
*Shane Falco #16 (QB) () — Former quarterback whose opportunities in football dried up after he choked during the 1996 during his senior year. He was drafted by Seattle where he was thrown into the pro spotlight with no preparation, when he should have been holding a clipboard. His professional career washed out soon afterwards. Falco was given the nickname "Footsteps" for his nervousness and fear of the blitz and pass rush. He now lives on a boat and earns his living scraping barnacles and other debris off the boats tied at the marina.
*Walter Cochran #34 (RB) () — A firm believer in the power of the Lord. Cochran played one game in the pros and blew out his knee. A big, bruising running back, his dream has always been to score one touchdown in a professional football game.
*Earl Wilkinson aka "Ray Smith" #42 (CB) () — A former star defensive back/kick returner with Minnesota serving a prison sentence for assaulting a police officer. He's allowed to play with the permission of the governor of Maryland. Wilkinson is given the pseudonym "Ray Smith" and almost no background on him is given to the commentators, likely to prevent public outcry over the recruiting of an incarcerated felon.
*Daniel "Danny" Bateman #56 (LB) () — A reserved, almost reticent man during normal interaction with people, but when placed in an adversarial situation, goes completely berserk, particularly if he sees the color red. Linebacker and defensive captain. He was a player at and later a veteran. Current member of the Washington D.C. team, he will take down anyone whom he perceives to be his enemy and anyone in the way of his target.
*Jumbo Fumiko #68 (OT) () — A Japanese sumo wrestler turned offensive tackle with a passion for food.
*Jamal Abdul Jackson & André Action Jackson #72 & #73 (G) ( and ) — Brothers and former offensive linemen turned bodyguards for rapper who only seem to excel when they play on the same team.
*Clifford Franklin #81 (WR) () — A stockboy in a mini-mart who can outrun anyone, but cannot catch anything. He is ecstatic to meet the real professional players until their hostility towards him eventually overcomes his exuberance.
*Brian Murphy #86 (TE) () — An excellent football player from who would have been a first round draft pick had he not been born deaf.

*Edward O'Neil () — Owner of the Washington Sentinels. O'Neil is the epitome of the double-talking, manipulative businessman who is only interested in accolades and doesn't think twice about reneging on a deal if it will earn him a more desirable result.
*Jimmy McGinty () — Former head coach of the Washington Sentinels. Once fired from his coaching job by O'Neil, he is asked back to coach the replacement players. Seeing this as an opportunity to put together his personal fantasy football team, McGinty offers his recruits a chance at glory and truly believes in his players. Loosely based on , who coached the to the playoffs with replacement players.
*Eddie Martel #7 () — Regular first-string quarterback for the Washington Sentinels. Selfish, egotistical and generally a very nasty individual, the despicable Martel dismisses the talents of the replacement players and especially enjoys putting down Shane Falco as the de facto leader of the thug-like regular Sentinels team.
*Pilachowski and Banes ( & , respectively) — Jimmy McGinty's coaching staff. Skeptical about the replacement players, they nevertheless follow McGinty's recommendations and find ways to work with the ragtag group of players.

The uniforms used in the movie are not, nor are they intended to be, replicas of those used by NFL teams. Both the "League" and teams are entirely fictional and are not meant to be a representation of any current or former NFL team (although there are references in dialogue to a character being an " Quarterback" and having rings). The story is inspired by the 1987 and the players' strike that took place during that season.