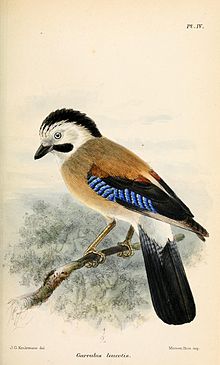 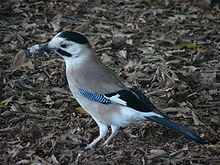 A typical example of the atricapillus group in Israel 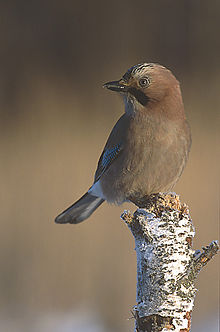 The Eurasian Jay (Garrulus glandarius) is a species of bird occurring over a vast region from Western Europe and north-west Africa to the Indian Subcontinent and further to the eastern seaboard of Asia and down into south-east Asia. Across its vast range, several very distinct racial forms have evolved to look very different from each other, especially when forms at the extremes of its range are compared.

The bird is called jay, without any epithets, by English speakers in Britain and Ireland.

The Eurasian Jay was one of the many species originally described by Linnaeus in his 18th century work Systema Naturae. He recognised its affinity with other corvids, naming it Corvus glandarius.[2]

A member of the widespread jay group, and about the size of the Jackdaw, it inhabits mixed woodland, particularly with oaks, and is an habitual acorn hoarder. In recent years, the bird has begun to migrate into urban areas, possibly as a result of continued erosion of its woodland habitat.

Its usual call is the alarm call which is a harsh, rasping screech and is used upon sighting various predatory animals, but the Jay is well known for its mimicry, often sounding so like a different species that it is virtually impossible to distinguish its true identity unless the Jay is seen. It will even imitate the sound of the bird it is attacking, such as a Tawny Owl, which it does mercilessly if attacking during the day. However, the Jay is a potential prey item for owls at night and other birds of prey such as Goshawks and Peregrines during the day.

Feeding in both trees and on the ground, it takes a wide range of invertebrates including many pest insects, acorns (oak seeds, which it buries for use during winter), beech mast and other seeds, fruits such as blackberries and rowan berries, young birds and eggs and small rodents.

It nests in trees or large shrubs laying usually 4–6 eggs that hatch after 16–19 days and are fledged generally after 21–23 days. Both sexes typically feed the young.