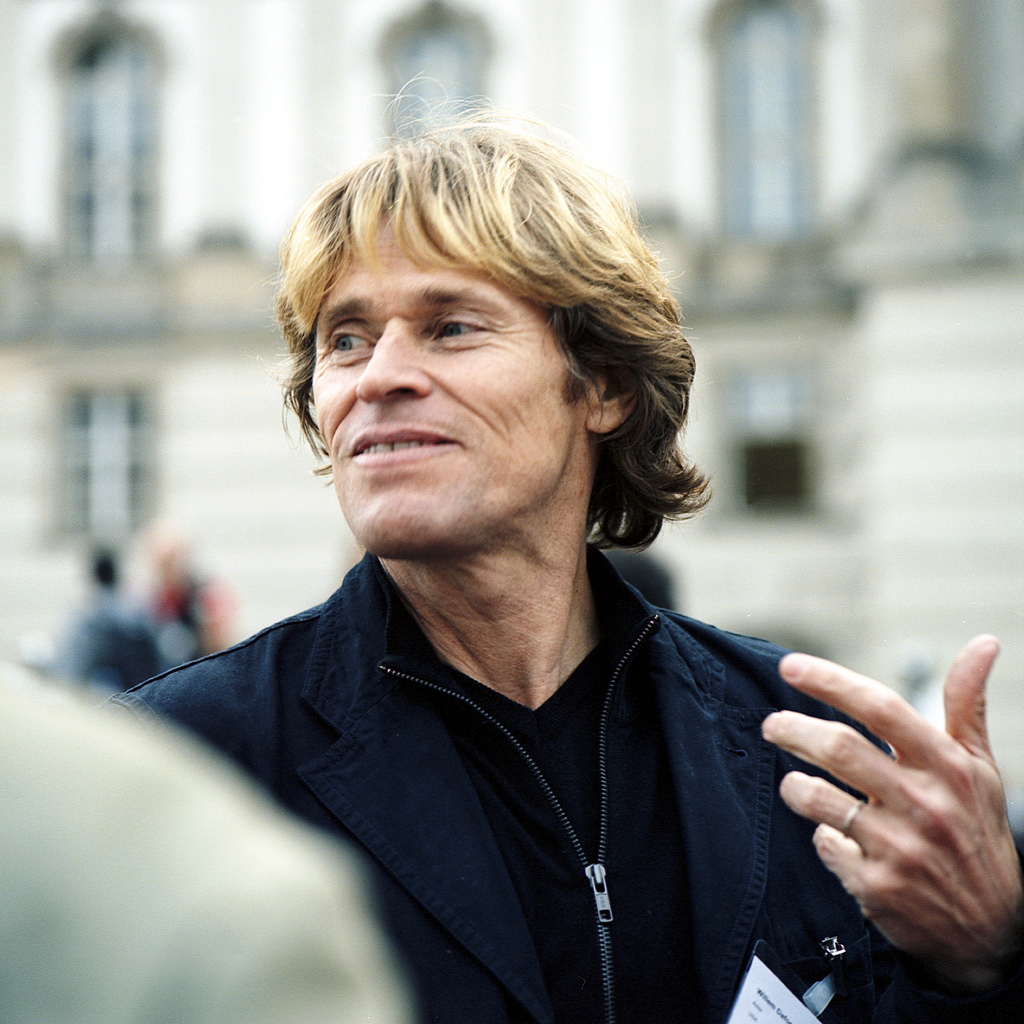 Dafoe, the seventh of eight children, was born William J. Dafoe in , the son of Muriel Isabel (née Sprissler), a nurse and native, and Dr. William Alfred Dafoe, a surgeon. [ [http://www.tiscali.co.uk/entertainment/film/biographies/willem_dafoe_biog.html Willem Dafoe Biography ] ] His paternal grandfather was from . [ [http://freepages.genealogy.rootsweb.com/~battle/celeb/dafoe.htm 1 ] ] His birth name is William Dafoe; he changed it to "Willem" (Dutch for "William") so people would not call him "Billy". After being expelled from for making a video that school administrators deemed "", he finished his studies at nearby . He then studied at the , but left before graduation in order to join the newly formed avant-garde group .

After touring with Theatre X for four years in the United States and Europe, he moved to and joined . Dafoe's film career began in 1981, when he was cast in "Heaven's Gate", but his role was removed from the film during editing. In the mid 80's he was cast by to star in "", in which Dafoe portrays counterfeiter Rick Masters. A year later he starred as the leader of a in "" (and later played a similar role in ""), but his first breakthrough film role was as the compassionate Sergeant Elias in "Platoon" (1986). In 1988 Dafoe starred in another movie set during the , this time as Agent Buck McGriff in "". He has since become a popular . He is often cast as unstable or villainous characters, such as the in the "" and Barillo in "". Before that, he was briefly considered for the role of The Joker by and for 1989's "Batman". Hamm recalls "We thought, 'Well, Willem Dafoe looks just like The Joker.'" The role ended up going to . [http://www.batmanmovieonline.com/behindthescenes/articles/samhamm.htm] He also played in "The Last Temptation of Christ" (1988). He once remarked "To this day, I can't believe I was so brazen to think I could pull off the Jesus role", though Dafoe received acclaim despite the controversy surrounding the film.Fact|date=July 2008

He worked briefly as a model in a 1990 campaign. In 2004, Dafoe lent his likeness and voice for the "Everything or Nothing" as villain . In 2006, he played detective Stan Aubray on the hunt for a serial killer, the lead in New York-set thriller "Anamorph", opposite and . In his most recent film he stars alongside in the sequel to 1997's "Bean", "" which was released worldwide , .

Dafoe met director at the Performance Group. LeCompte and Dafoe were part of the restructuring of The Performance Group and became professional collaborators and founding members of , and began a relationship. Their son, Jack, was born in 1982. The pair would eventually split in 2004. [http://www.tv-now.com/stars/dafoe.html] Dafoe married Italian director and actress on , .

He is part-owner of a restaurant with friend and fellow actor . [ [http://www.netglimse.com/celebs/pages/john_c._mcginley/index.shtml John C. McGinley Biography, Bio, Profile, pictures, photos from Netglimse.com ] ]

Dafoe's brother, Donald, is a transplant surgeon and researcher.

*2002: Won, "Special Award:For immense contribution to the art of film."

*2001: Nominated, "Best Performance by an Actor in a Supporting Role in a Motion Picture" - "Shadow of the Vampire"

MTV Movie Awards, Mexico
*2004: Nominated, "Most Divine Miracle in a Movie" - "The Last Temptation of Christ"

*2001: Won, "Best Performance by an Actor in a Supporting Role, Comedy or Musical" - "Shadow of the Vampire"