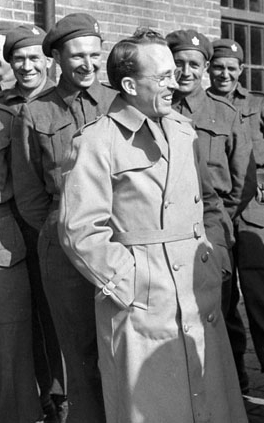 Thomas Clement "Tommy" Douglas, PC, CC, SOM (, – , ) was a Scottish-born minister who became a prominent Canadian social democratic politician. As leader of the Saskatchewan (CCF) from 1942 and the seventh from 1944 to 1961, he led the first government in North America and introduced universal public healthcare to Canada. When the CCF united with the to form the , he was elected as its first federal leader and served in that post from 1961 to 1971. He is warmly remembered for his folksy wit and oratory with which he expressed his determined idealism, exemplified by his of .

In 1930 Douglas married Irma Dempsey, a music student at Brandon College. They had one daughter, actress , and they later adopted a second daughter Joan, who became a nurse. Through Shirley, he is grandfather of actor .

Tommy Douglas was born in Falkirk, Scotland in 1904. In 1910, his family immigrated to Canada, where they settled in Winnipeg. As a child, Douglas injured his leg and developed . The leg would have been amputated had it not been for a doctor who saw the condition as a good subject to teach his students and agreed to help for free. This rooted Douglas' belief that health care should be free to all, as he thought people shouldn't be dependent on generosity in order to get their health in good order. During , the family returned to . They came back to Winnipeg in 1919, in time for Douglas to witness the . From a rooftop vantage point on Main Street, he witnessed the police charging the strikers with clubs and guns, a streetcar being overturned and set on fire. He also witnessed the RCMP murder two men. [This incident influenced Douglas in his commitment to protect fundamental freedoms in a Bill of Rights on his election as Premier of Saskatchewan in 1944. See, Ken Norman, The Saskatchewan Bill of Rights, The Encyclopedia of Saskatchewan, 2005, Regina, Canadian Plains Research Center, at page 798; [http://esask.uregina.ca/entry/saskatchewan_bill_of_rights.html] ]

At the age of fifteen, Douglas began an amateur career in boxing. In 1917 Tommy used the One Big Union Gym to train his skill, fighting bouts that included wrestling as well. Douglas appeared with Canadian heavyweight champ Jack Taylor, and the U.S. champion, Ed "Strangler" Lewis. Weighing 135 pounds, Douglas fought in 1922 for the Lightweight Championship of Manitoba; and after a six round fight won the title. Douglas sustained a broken nose, a loss of some teeth, and a strained hand and thumb. Douglas successfully held the title the following year.

In 1924, Douglas attended Brandon College to study for the ministry. While there, Douglas was influenced by the movement, which combined Christian principles with social reform. He graduated from Brandon College in 1930, and completed his (MA) in Sociology from in 1933. His thesis entitled "The Problems of the Subnormal Family" was on , a way to "solve the problems of the Subnormal Family" by sterilizing mentally and physically disabled Canadians, and sending them to camps. [http://morris.mcmaster.ca/ipac20/ipac.jsp?session=W20E4526539R7.99100&profile=lib&source=~!morris&view=subscriptionsummary&uri=full=3100001~!784779~!4&ri=3&aspect=basic_search&menu=search&ipp=20&spp=20&staffonly=&term=Douglas,+Thomas+Clement,+1904-&index=AUTHO&uindex=&aspect=basic_search&menu=search&ri=3] He briefly continued his graduate work at the but rejected this theory after his experiences of encountering the poor in Chicago and after a trip to in 1938. He rarely mentioned his thesis later in his life, and his government never enacted eugenics policies (it may be noted that two Canadian provinces, and , had eugenics legislation in the 1930s, and that the philosophy was not discredited in North America prior to ).

Following this, he became a minister at the Calvary Baptist Church in . With the onset of the Depression, Douglas became a social activist in Weyburn, and joined the new CCF organization. He was elected to the in the 1935 federal election.

After the outbreak of , Douglas enlisted in the wartime Canadian Army. He had volunteered for overseas service and was on a draft of men headed for the when a medical examination turned up leg problems. Douglas stayed in Canada and the Grenadiers headed for . But for that ailment, he would have been with the regiment when its members were killed or captured at Hong Kong in December 1941.

Despite being a federal Member of Parliament and not yet an MLA, Douglas was elected the leader of the Saskatchewan CCF in 1942 but did not resign from the House of Commons until , . He led the CCF to power in the , 1944 provincial election, winning 47 of 53 seats in the , and thus forming the first democratic socialist government in not only Canada, but all of North America as well.

Douglas and the Saskatchewan CCF then went on to win five straight majority victories in all subsequent Saskatchewan provincial elections up to 1960. Most of his government's pioneering innovations came about during its first term, including:
* the creation of the publicly owned Saskatchewan Power Corp., successor to the Saskatchewan Electrical Power Commission, which began a long program of extending electrical service to isolated farms and villages;
* the creation of Canada's first publicly owned automobile insurance service, the Saskatchewan Government Insurance Office;
* the creation of a large number of , many of which competed with existing private sector interests;
* legislation that allowed the unionization of the public service;
* a program to offer free hospital care to all citizens—the first in Canada.
* passage of the Saskatchewan Bill of Rights, legislation that broke new ground as it protected both fundamental freedoms and equality rights against abuse not only by government actors but also on the part of powerful private institutions and persons. (The Saskatchewan Bill of Rights preceded the adoption of the by the s by 18 months).

Premier Douglas was the first head of any government in Canada to call for a constitutional bill of rights. This he did at a federal-provincial conference in Quebec City in January, 1950. No one in attendance at the conference supported him in this. Ten years later, Premier Lesage of Quebec joined with Premier Douglas at a First Ministers' Conference in July, 1960, in advocating for a constitutional bill of rights. Thus, respectable momentum was given to the idea that finally came to fruition, on April 17, 1982, with the proclamation of the Canadian Charter of Rights and Freedoms. [Barry L. Strayer, "Patriation of the Constitution and the Charter: 25 years after", The Timlin Lecture, February 20, 2007, University of Saskatchewan, at p. 14.]

Thanks to a booming postwar economy and the prudent financial management of provincial treasurer , the Douglas government slowly paid off the huge public debt left by the previous Liberal government, and created a budget for the Saskatchewan government. Coupled with a federal government promise in 1959 to give even more money for medical care, this paved the way for Douglas's most notable achievement, the introduction of legislation in 1961.

Douglas's number one concern was the creation of Medicare. In the summer of 1962, Saskatchewan became the centre of a hard-fought struggle between the provincial government, the North American medical establishment, and the province's physicians, who brought things to a halt with the 1962 . The doctors believed their best interests were not being met and feared a significant loss of income as well as government interference in medical care decisions even though Douglas agreed that his government would pay the going rate for service that doctors charged. The medical establishment claimed that Douglas would import foreign doctors to make his plan work and used racist images to try to scare the public.Fact|date=June 2007 Their defenders have also argued that private or government medical insurance plans covered 60 to 63 per cent of the Saskatchewan population before Medicare legislation was introduced.Fact|date=June 2007

An often forgotten political fact is that though Douglas is widely hailed as the father of Medicare, he had retired from his position as Saskatchewan's premier, turned over this job in 1961 to Woodrow Lloyd and took the leadership of the federal New Democratic Party.

The Saskatchewan program was finally launched by his successor, , in 1962. The success of the province's public health care program was not lost on the federal government. Another Saskatchewan politician, newly elected Prime Minister , decreed in 1958 that any province seeking to introduce a hospital plan would receive 50 cents on the dollar from the federal government. In 1962, Diefenbaker appointed Justice Emmett Hall—also of Saskatchewan, a noted jurist and Supreme Court Justice—to Chair a on the national health system - the . In 1964, Justice Hall recommended the nationwide adoption of Saskatchewan's model of public health insurance. In 1966, the Liberal minority government of created such a program, with the federal government paying 50% of the costs and the provinces the other half.

When the CCF allied with the to form the (NDP) in 1961, Douglas defeated at the first NDP leadership convention and became the new party's first leader. Douglas resigned from provincial politics and sought election to the House of Commons in the riding of in 1962, but was defeated. He was later elected in a in the riding of , .

Re-elected as MP for that riding in the 1963 and 1965 elections, Douglas lost the redistricted seat of in the 1968 federal election. He won a seat again in a 1968 by-election in the riding of , following the death of Colin Cameron, and represented it until his retirement from electoral politics in 1979.

While the NDP did better in elections than its CCF predecessor, the party did not experience the breakthrough it had hoped for. Despite this, Douglas was greatly respected by party members and Canadians at large as the party wielded considerable influence during the minority governments of Lester Pearson. In 1970, Douglas and the NDP took a controversial but principled stand against the implementation of the "" during the .

In 1962, Douglas received an honorary from the . He resigned as NDP leader in 1971, but retained his seat in the House of Commons. He served as the NDP's energy critic under the new leader, David Lewis. He was re-elected in the riding of Nanaimo–Cowichan–The Islands in the 1972 and 1974 elections.

He retired from politics in 1978 and served on the board of directors of Husky Oil, an oil and gas exploration company.

In June 1984 Douglas was injured when he was struck by a bus but he quickly recovered and on his 80th birthday he claimed to "" that he usually walked up to five miles a day. [cite news |work=Globe and Mail |date=, |title=Douglas is well after accident |page=8] By this point in his life his memory was beginning to slow down and he stopped accepting speaking engagements but remained active in the Douglas-Coldwell Foundation.

Douglas died of on , at the age of 81 in . [ [http://www.cbc.ca/greatest/top_ten/nominee/douglas-tommy.html Tommy Douglas] from ]

In the two about , "Trudeau" and "Trudeau II: Maverick in the Making", Tommy Douglas is portrayed by . In the biography mini-series, "", which aired on and 13, 2006, also on CBC, Douglas was played by . The movie was widely derided by critics as being historically inaccurate. Particularly, the movie's portrayal of James Gardiner, premier of Saskatchewan from the late 1920s to mid-1930s, was objected to by political historians and the Gardiner family itself. In response, the CBC consulted a "third party historian" to review the film and pulled it from future broadcasts, including halting all home and educational sales.Prairie Giant was shown in Asia on the Hallmark Channel on June 11 and June 12 2007. [cite news|title=CBC pulls Tommy Douglas movie|url=http://www.cbc.ca/sask/story/sk-tommy-douglas060612.html|publisher=CBC|date=June 12, 2006|accessdate=2007-04-30] [cite news|title=CBC pulls Tommy Douglas movie |url=http://www.canada.com/edmontonjournal/news/story.html?id=a3725ff3-a14d-40ea-892a-700bf8b36d49&k=74396|publisher=Edmonton Journal|first=James|last=Wood|date=June 12, 2006|accessdate=2007-04-30]