It is a semi-sequel to the previous games that Sega produced based on Walt Disney cartoon characters. In the game, Mickey Mouse and Donald Duck are sucked into a magical world, while preparing for a magic act. Now they must survive over a dozen different side-scrolling levels, in order to return home. 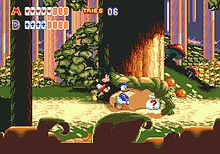 Mickey and Donald in the first level. The cards represent the characters' health, and are turned face-down when they take damage.

The game's music, artwork and animation shows influences from classic Disney animated films, including; Aladdin, The Little Mermaid, The Sword in the Stone, Alice in Wonderland and Pinocchio. The game included many features that broke the standard platforming mold. It also seems to have an inspirational effect on Kingdom Hearts as many of the worlds are visited again.

Mickey and Donald can run, jump, or attack by flourishing their capes. Enemies defeated in this way turn into doves, cards, or other harmless objects depending on the enemy. After defeating the boss of each level, a new magic spell is learned, allowing the pair to traverse the next level; i.e. flying on a magic carpet or going underwater in an air bubble.

The gameplay changes depending on if the player selects Mickey or Donald, in a one player mode, or if two people want to control both characters at once. For instance, Mickey can squeeze through certain gaps, while Donald must find a different route; if both are playing, Mickey can pull Donald through the gap. Either can stand on the others' shoulders to ascend higher, and lower a rope to pull the other up.

Along the way, Mickey and Donald learn new magic to perform in later levels.